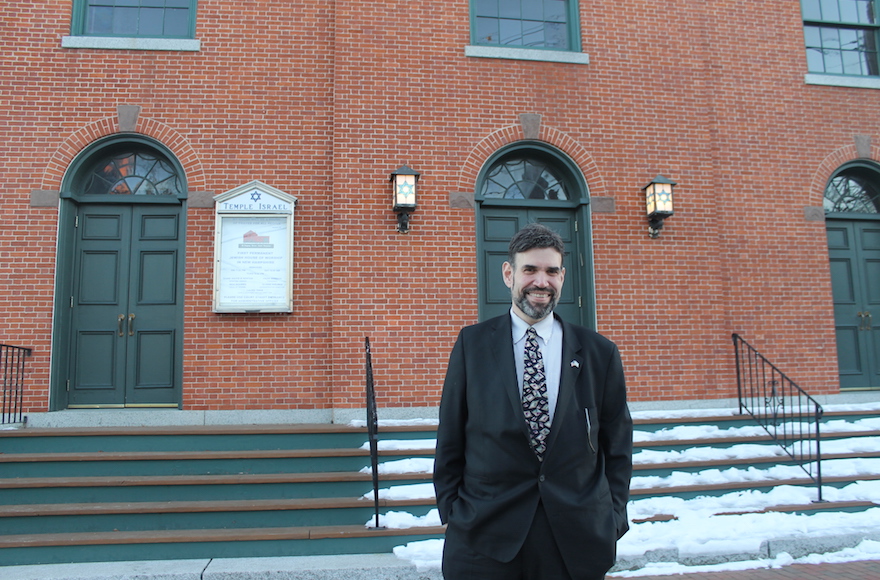 PORTSMOUTH, N.H. (JTA) – Sit down with Rabbi David Senter in his basement office at his historic New Hampshire synagogue and you could be forgiven for thinking you’re in a Brooklyn yeshiva.

Senter peppers his speech with Hasidic tales and Talmudic aphorisms, and before he goes to daven he fastens a black Hasidic gartel belt around his waist.

On the wall, a letter of endorsement from the late Rabbi Aaron Soloveichik of Chicago’s famed Brisk Yeshiva hangs alongside Senter’s degree of Orthodox ordination. There are portraits of Senter’s long-bearded great-grandfathers and of his father, founder of the New Jersey-based Kof-K kosher certification agency.

But look a little closer and there’s a photo of Senter with his friend the Palestinian imam Mohammad Qatanani, whom U.S. authorities once sought to deport for alleged Hamas ties. (A U.S. judge eventually ruled that Qatanani’s 1993 detention by Israel was for association with the Muslim Brotherhood, not Hamas, and did not disqualify him for U.S. permanent residency.) A “GLBT Safe Zone” sticker adorns Senter’s door. Down the hall, an Episcopalian woman leads the congregation’s weekly class in biblical Hebrew. And when congregants arrive for the Tuesday night Maariv service at Temple Israel, men and women sit together.

Senter, 54, is a rarity: an Orthodox rabbi from a “black hat” background who left Orthodoxy, later embraced Conservative Judaism and now occupies a Conservative pulpit. There are only a handful of other Orthodox-trained rabbis in Conservative shuls; they call themselves “flippers,” says Senter.

“I’m just as quick to quote Rabbi Mordechai Kaplan as to tell a story of Rabbi Levi Yitzhak of Bardichev,” Senter says, referring in the same breath to the father of Reconstructionist Judaism and the legendary 18th-century Hasidic sage. “I have walked in almost every part of the Jewish world and I draw strength from all of it.”

Senter’s path to the Conservative rabbinate in New Hampshire, which will hold the first presidential primary of this election cycle on Feb. 9, was hardly direct.

READ: New Hampshire Jews trust Bernie Sanders, but voting all over the map

The son of a prominent Orthodox rabbinic family in New Jersey, Senter got his own Orthodox ordination in 1984 and went into the family business, serving as a rabbinic administrator at the Kof-K agency and then as a kosher caterer. In the 1990s he opened the first kosher food concessions at Yankee and Shea stadiums in New York.

But while his businesses were going well, Senter’s personal life was falling apart. The father of four young children, Senter and his wife were headed for a rough divorce, and after they split Senter walked away from religion. For the first time since he was a teenager, Senter was clean shaven. For someone from an esteemed Orthodox family who had once dressed in a bekishe and homburg — the knee-length shiny black coat and rounded black hat worn by Hasidim — it was a radical change.

“I was not your typical OTD,” Senter says, using an Orthodox neologism for one who has left the faith – an acronym for Off The Derech, or path. “I never gave up wearing a yarmulke, but I felt there wasn’t a place for me anymore in the frum community.”

For two years, Senter didn’t set foot in a synagogue.

Then one day a man walked into his bagel shop and asked him to cater an event at a nearby Conservative temple, Orangetown Jewish Center. Senter, then 35, agreed, and on Simchat Torah he found himself back in shul, albeit a very different one from those to which he was accustomed.

But it felt right, and Senter soon became a regular, helping make the minyan. He was asked to serve on the board, then the ritual committee. Some Conservative practices took a while to get used to, like sharing the bimah with women.

“There were things that were hard to wrap my head around,” said Senter, who eventually embraced egalitarian Judaism, finding support for it in Jewish law.

“When he first came to our synagogue, he didn’t understand there were people other than the Orthodox who actually cared about halachah, and he was so impressed to discover that we did,” recalled Orangetown’s rabbi, Craig Scheff. “I think he found a measure of sincerity in the Conservative community that he respected and eventually realized he could live and be comfortable within that system.”

Senter had gone from being a lapsed Orthodox Jew to a Conservative baal teshuvah – a returnee to the faith. But Scheff urged him to go further and return to the rabbinate. 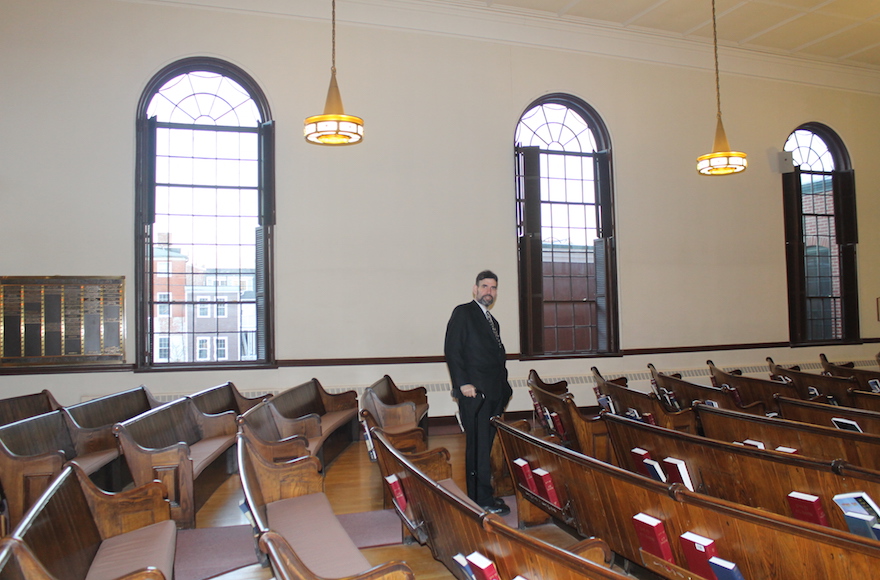 “He would say, ‘David, you have this Hasidic love of Yiddishkeit that people search for,’ and I would say to him, ‘My life doesn’t align with the halachic ideal as I perceive it,’” Senter recalls. “He said to me, ‘David, if we all waited until we were perfect, there would be no rabbis.’”

“I started to realize that I wanted to be remembered for something more than selling the best hot dogs in New York City,” he said.

Senter sold his catering business and in 1999 moved to upstate New York to take a pulpit job at a Conservative synagogue in Saratoga Springs. He stayed for six years, relying heavily on Conservative rabbinic colleagues “to understand the new context in which I was operating.” (He did not obtain Conservative ordination.)

In 2005, Senter remarried, to a woman he met on JDate, and moved to a Conservative pulpit in New Jersey, near her home. In 2010, he took a job at a Conservative shul in Plainview, New York, where in a bid to draw more families he instituted several notable innovations, including eliminating Hebrew school tuition.

Senter ended up in New Hampshire almost by accident.

While on vacation in Portsmouth in 2013, he stopped into Temple Israel to catch a minyan to recite Kaddish for his uncle’s yahrzeit. The synagogue’s longtime rabbi had retired a few years earlier, and his replacement had not worked out. Lay leaders asked if Senter would be interested in applying for the position. Senter initially demurred, but the more he and his wife thought about it, the more they warmed to the idea. They moved to New Hampshire in 2014.

“It’s a magnificent place to live,” Senter said, giving JTA a tour of Temple Israel’s building, constructed in 1827 as a Methodist church and sold in 1912 to Portsmouth’s fledgling Jewish congregation. A $3.5 million renovation in 2007 left the sanctuary’s distinct features in place, including original windows and pews installed in 1870 constructed by shipyard builders.

Today, the 270-member shul is one of the few in New Hampshire that’s growing, with 47 new families over the last two years, according to Senter. There are 97 students in the twice-weekly religious school.

“What a difference a rabbi makes,” longtime congregant Jenny Rosenson told JTA. “He is a wonderful match for the congregation. He is very mindful. He is so welcoming. The kids love him. He’s an approachable human being. And his joy is absolutely pervasive. You can see he loves what he’s doing.”

Twice a month, the rabbi and his wife host congregants in their home for a Shabbat meal. Their dog, a black cockapoo named Binyomin Baruch, sometimes nips at guests’ heels. Congregants range from septuagenarians who grew up Orthodox to a Roman Catholic man who comes reliably to weekday minyans.

“There’s such diversity here. It’s an opportunity to relate to all different parts of Klal Yisrael,” Senter says, using a Hebrew term for the Jewish people. “It’s very compatible with the nature of my rabbinate. I pride myself on meeting people where they are.”

(Correction: This story has been changed to reflect the correct location of the Kof-K kosher certification agency.)