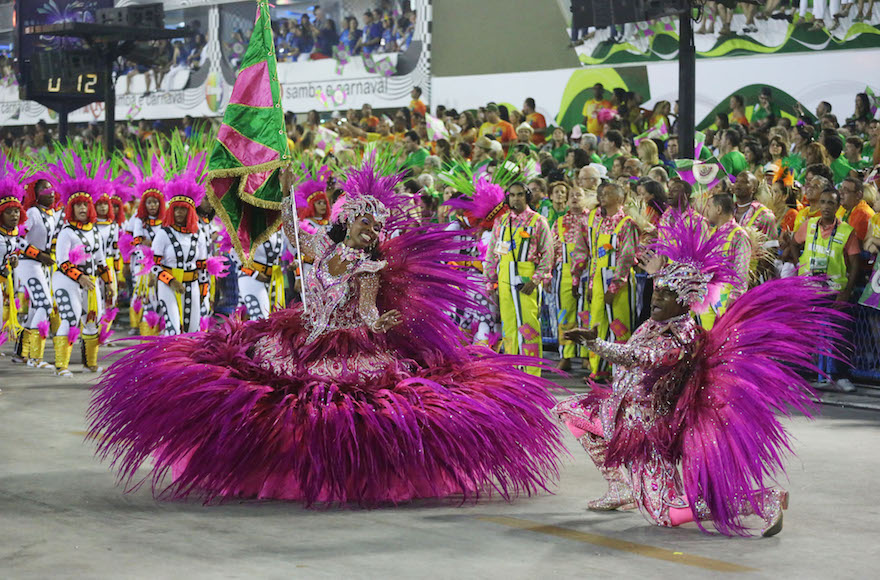 A Carnival performance by the Mangueira samba school in Rio. (Riotur)
Advertisement

Carnival follows a lunar calendar, so the exact date varies — this year it’s Feb. 5-10. The celebration kicks off Friday night and ends on Ash Wednesday at noon, when some very hungover Brazilians are forced to go back to work. Easter Sunday comes 40 days after.

Though it may have Catholic connotations, the roots of Carnival trace back to pagan rites of spring held by the ancient Romans and Greeks. Across Europe, the season was celebrated with parties, masks and dancing in the streets. The Portuguese brought the Carnival concept to Rio in the late 1800s, when French-style balls and masquerade parties became common. Over time, unique elements deriving from African, Ameri-Indian and even Jewish cultures were incorporated.

Carnival has become a proud national institution — and Brazil’s 120,000 Jews have found numerous ways to engage with the festivities around them (or escape them altogether, should they so choose).

Here is an appetizer of this blowout Brazilian party highlighting five of the most Jewish ways to spend Carnival. Read on for a vicarious glimpse — or, if you’re lucky enough to be in Brazil this weekend, head to one of these hotspots, slap on some sunscreen, grab a “caipirinha” and prepare to get your samba on!

This year there’s hot Jewish news at the Sao Paulo Sambadrome — a samba arena with a concrete runway the length of nearly six football fields lined with stands that hold 27,000 spectators.

Two Ashkenazi Jews, Ronny Potolski and Jairo Roizen, are making headlines for their joint debuts as songwriters and composers for their first-division samba schools, Unidos do Peruche and Perola Negra. (A samba school is a sort of club in which thousands of members practice and perform in huge compounds devoted to samba. Structured like a guild, they have a strong community basis and are usually associated with and named after a neighborhood.) 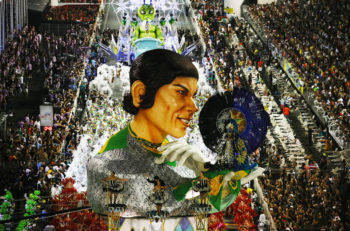 The winning flagship float of Sao Paulo’s 2015 festival made by the Vai-Vai samba school. (Robson Lajes/LIGASP)

In fact, Potolski’s love of samba is so deep that it inspired the real deal. In 2008, he fell in love with Thais Paraguassu, an amazing porta-bandeira, a female dancer who carries the samba school’s flag. Paraguassu converted to Judaism and the two married last year.

You can samba with Potolski, Roizen and Paraguassu at one of Sao Paulo’s 14 schools performing on Friday and Saturday.

Over 1 million tourists from around the world come to enjoy Carnival in Rio. Prior to hosting events in the 2016 Summer Olympics, the Rio Sambadrome will showcase 26 samba schools that will wow spectators with their exquisite choreography and elaborate floats. (If you can’t join the 60,000 lucky ones in the stands along the nearly half-mile-long runway, there’s a live TV broadcast that reaches some 2 billion viewers.)

Generations ago, Jewish engagement in Rio Carnival took place at Yiddish Avenid, a nickname for the area in downtown Rio de Janeiro where most of the Jewish immigrants from Eastern Europe settled between the 1920s and 1960s. Here, Jews exchanged klezmer and other European music traditions with those of their lower-class Afro-Brazilian neighbors. The neighborhood is part of a larger district known as “Little Africa” that’s now recognized as the cradle of samba.

Jewish themes often permeate Rio’s majestic parade, though that’s not the case this year. In 2003, the Mangueira samba school won second place — yes, there is a jury and a trophy — for depicting the story of the Ten Commandments, including a float in the shape of a Star of David and costumes embellished with sidelocks, tefillin, small Torahs and dreidels.

However, Rio’s parade often mixes the sacred and the profane, and it’s famous for igniting controversy around samba songs and themes. In 2008, for example, a planned Jewish-themed float by the Viradouro samba school made headlines for portraying piles of Holocaust victims’ bodies and even a dancing Hitler. Fortunately it was banned before the show started.

Yet like most Brazilians, Rio’s Jews can be found among the celebrants cheering for their favored samba school.

Blocos are street party groups that joyfully dance, sing, drink, flirt, kiss and do, well, whatever else among the skillful drummers playing samba. This year in Rio, 505 blocos are set to perform.

Founded by a group of 13 youths, including nine Jews, the bloco Sargento Pimenta — Portuguese for “Sergeant Pepper” — has quickly become a phenomenon. It draws some 180,000 people who want to dance and sing to samba versions of Beatles hits. 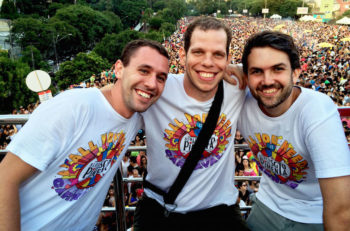 Sargento Pimenta’s Jewish founders Bruno Wajsbrot, Leonardo Stul and Daniel Spector backed by a crowd of 180,000 at their 2015 presentation. (Bloco do Sargento Pimenta)

About 10 percent of Pimenta’s 140 musicians are Jewish, so if you scream “shalom” during their presentation on Monday, you may hear “baruch haba,” the Hebrew salute for welcome, as a reply. Give it a shot!

Pimenta has performed in some Jewish weddings where traditional Jewish songs were played.

“But our bloco does not have a religion, it belongs to Carnival,” Leonardo Stul, one of its founders, told JTA.

After a 90-minute drive from Rio, you reach Teresopolis, a cozy mountain town. So many of Rio’s Jews keep a vacation home here that it’s also known as Eretzopolis, a riff on Eretz Yisrael, the Land of Israel. Those who don’t have a condo here tend to have relatives or friends who do.

During Carnival, the small local Jewish population of 500 triples with the influx of Rio residents seeking cooler temperatures and a more peaceful environment.

But for those who can’t disconnect from the thrill, the Carnival ball held by WIZO – the global Jewish women’s volunteer organization dedicated to social welfare — is the place to be, especially if you have kids. Because Purim always falls very close to Carnival, the Jewish holiday is always the theme. The Queen Esther pageant, which closes the ball, is a must-go for little girls – see if you can count how many are dressed as Elsa from “Frozen.”

“We are very glad to see that our ball has become a much-awaited event in our community,” WIZO Brazil’s president, Silene Balassiano, told JTA.

For the Jews of Sao Paulo, a traditional spot to escape Carnival craziness is a condo in the coastal city of Guraruja — sometimes known as Guarushalayim, an amalgam of Yerushalayim, the name of Jerusalem in Hebrew, and Guaruja.

Bahia, in northeast Brazil, is known as the country’s most musical state. It’s the epicenter of African culture here and birthplace of capoeira, the Brazilian martial art.

Capoeira has become a hit in Israel — as such, an estimated 2,000 Israeli tourists disembark in Bahia’s capital city, Salvador, from December through Carnival, according to a local Jewish source.

Forget about sambadromes here; instead, Israelis and local Jews meet at “trios eletricos.” Unlike Rio’s blocos, which are mostly stationary, trios are trucks loaded with speakers and topped with a stage that move through three official routes along the city’s streets. Behind them, some 2 million people dance along more than 15 miles of streets.

During Carnival, local synagogues are said to welcome some 200 Israelis for Shabbat dinners.

“The vast majority are backpackers who have just finished their military service in Israel and come to South America to celebrate,” said Mauricio Laukenickas, who runs a local travel agency. “Whether you are Israeli, or wherever you come from, baruch habah to Carnival in Bahia.”