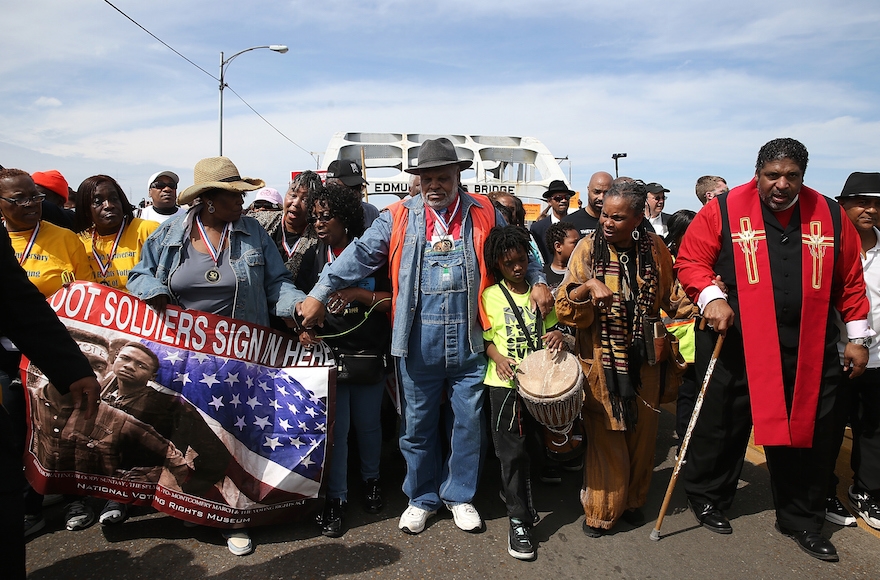 Fifty-one years ago this week, hundreds of people marched from Selma toward Montgomery, Alabama, to demand voting rights for African-Americans. The march, one of the most famous civil rights demonstrations in American history, helped spur the passage of the Voting Rights Act.

What is less well known is that kippahs were a symbol of the effort. Black participants embraced the religious head coverings as “freedom caps” in appreciation of their Jewish supporters, like the famous Rabbi Abraham Joshua Heschel.

At an anniversary commemoration of the march in Selma Sunday, freedom caps were back. Marc Daniels, a 60-year-old Jewish salesman from Springfield, Illinois, was there hawking commemorative kippahs as a symbol of cross-racial and cross-religious solidarity. He said he hoped to counter the “racist hatred” of Republican presidential front-runner Donald Trump. 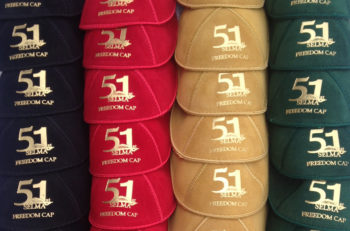 A look at some of the “Freedom Cap” kippahs Marc Daniels took to the 51st anniversary of the Selma march. (Courtesy of Marc Daniels)

The newly designed kippahs are emblazoned with the words “Selma: Freedom Cap” and a logo including the number 51 and a silhouette of the Edmund Pettis Bridge. On March 7, 1965, marchers were stopped at the bridge by police and beaten brutally. International television footage of “Bloody Sunday” won public sympathy for the civil rights movement, and two weeks later, Martin Luther King Jr. led a successful march across the bridge to the state capital with Heschel by his side. The Voting Rights Act passed later that year.

Daniels didn’t sell many kippahs at the anniversary event, but he got his point across.

He collected the signatures of dozens of civil rights leaders — including Bernard Lafayette, head of the Southern Christian Leadership Conference (whose first president was Martin Luther King Jr.), and longtime U.S. House Rep. James Clyburn — on a kippah that he gave to Susannah Heschel, the late rabbi’s daughter. She was “blown away,” Daniels said.

He also lead an impromptu prayer at the local Clinton Chapel AME Zion Church, which he said he gave a “kabbalistic spin.” “The only thing I didn’t do was take communion,” he told JTA.

It wasn’t the first time Daniels had brought the kippah to bear on American politics. Since last year, he has been selling kippahs emblazoned with presidential candidates’ names at campaign events.

He even got a moment of Internet fame when The New York Times caught him handing Sen. Marco Rubio, R-Texas, a kippah and wishing him a “gut Shabbos,” Yiddish for “good Shabbat.” Clearly confused, Rubio responded “boot Shabbos?” 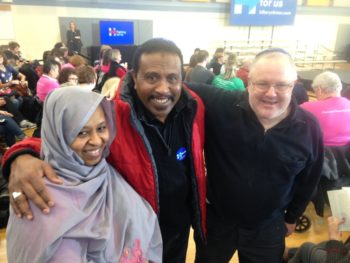 Daniels said he’s not out to make money. Whatever he makes from selling his kippahs goes toward the expenses he incurs traveling to campaign events across the country, he said. He was inspired to start producing the Selma-themed kippahs after reading a 1965 JTA article on the original freedom caps.

“My primary goal is to get this message across that there’s another way of politicking beyond fear mongering,” he said.

After speaking by phone with JTA Tuesday, he sped off to a Hillary Rodham Clinton Democratic presidential campaign event in St. Louis, Missouri, where he tracked down Bill Clinton. His goal was to pitch his biggest idea yet to the former president: a march of Jews and Muslims across the Edmund Pettis Bridge in 2017.

Daniels didn’t get enough face time to make the pitch, but he was able to pass Clinton two kippahs, he said: one featuring Hillary Clinton’s name, the other Martin Luther King Jr.’s.