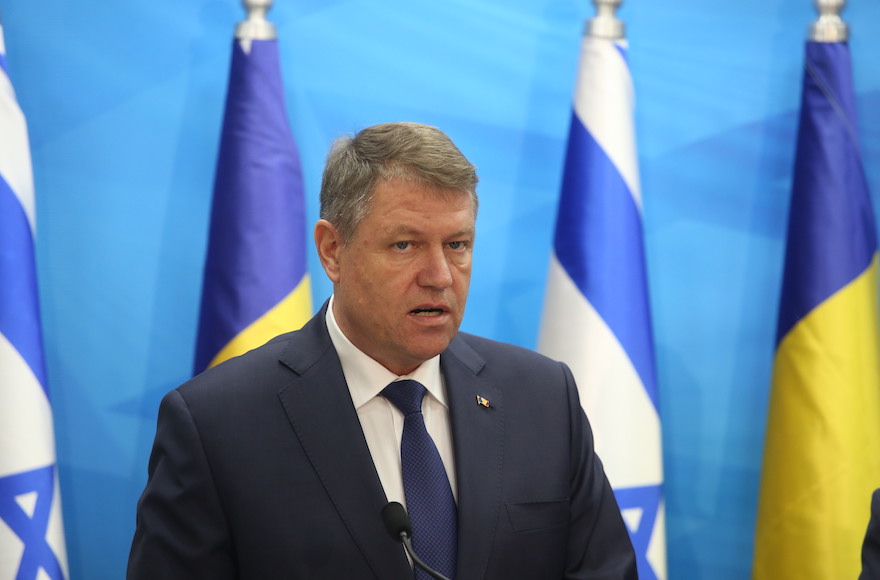 (JTA) – During his visit to Israel, Romania’s president spoke on the phone to a compatriot who was wounded in a stabbing attack in Tel Aviv .

President Klaus Werner Iohannis told media on Wednesday of his conversation with the Romanian-Israeli victim of the stabbing attack that occurred the previous day, during a spate of incidents in Tel Aviv that left one victim dead and 10 wounded.

“I talked to him earlier. I wanted to hear from him how he feels,” Johannis, who was in Israel on his first official visit as president when the attack happened, was quoted as telling the news agency Agerpres. “He’s still weak after surgery. He feels relatively well and is in stable condition.”

After visiting the Western Wall in Jerusalem, Klaus said he had invited the victim, who was not named, to visit him in Romania after he recovers.

On Thursday, Johannis also visited Ramallah in the West Bank, where he met with Palestinian Authority President Mahmoud Abbas and spoke of the need to avoid violence and work toward implementing a two-state solution for the Israeli-Palestinian conflict.

“We understand that Israel’s security is vital and crucial,” said Johannis, whose country is one of Israel’s staunchest advocates within the European Union, during an address in Israel. “There is no compromising on this. The war of terror requires Romania’s determination and we are members of the alliance against ISIS out of the realization of the need to fight terror,” he said of the Islamic State terrorist group.

Days before Johannis’ visit, the World Jewish Restitution Organization announced it had successfully negotiated additional funds for nearly 1,000 Holocaust survivors from Romania living in Israel. Approximately $1.6 million will be distributed among 947 victims under the new deal, which the WJRO negotiated in multilateral talks, including with the Romanian government.

The deal benefits “the very poorest Romanian Holocaust survivors in Israel — those living at the poverty line,” said Gideon Taylor, WJRO chair of operations.  Talks on restitution of Jewish-owned property without heirs in Romania are ongoing.

On Tuesday, Romania took over from Hungary the rotating chairmanship of the International Holocaust Remembrance Alliance – an international body working to commemorating the genocide. Some 750,000 Jews lived in Romania prior to the Holocaust; approximately half were killed. Today, only a few thousand Jews live there.