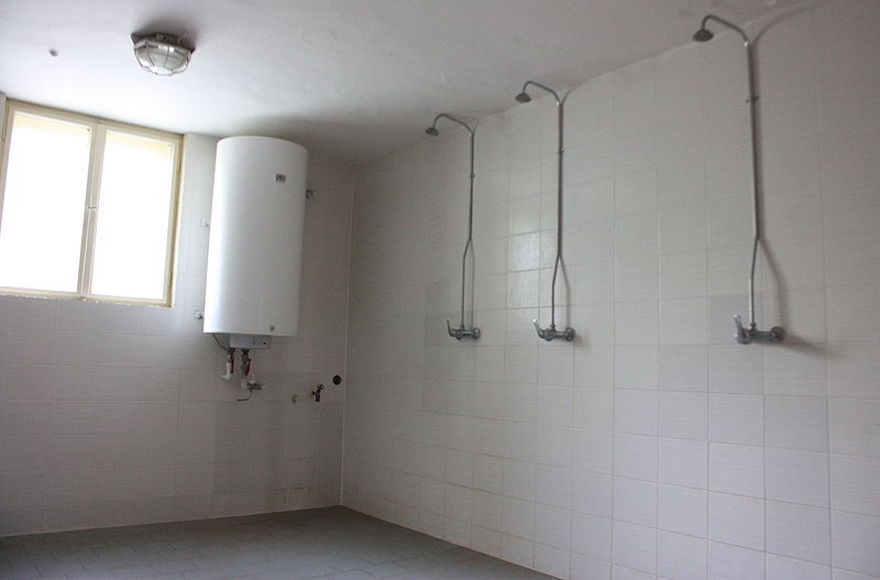 An illustrative photograph of a school shower (Wikimedia Commons)
Advertisement

(JTA) — Belgian elementary school students are accused of anti-Semitic bullying of a Jewish classmate, whom they allegedly sprayed with deodorant while he was showering at school to simulate Nazi gas chambers.

The three students told their Jewish classmate they were “gassing” him during the incident, according to his mother.

The Jewish student was subjected to anti-Semitic abuse over the past two years at his elementary school in the Brussels suburb of Braine-le-Chateau, according to a statement Friday by the Belgian League Against Anti-Semitism. All the involved students are now 12 years old.

The mother of the alleged victim filed a police complaint last week over the bullying, which she said her son detailed to her. Francis Brancart, an education board official, confirmed Thursday that his office was looking into the matter, which he said may require the opening of an independent inquiry, the news agency Belga reported. He said he could not confirm the veracity of the complaints.

The alleged incident in the showers happened early last year. The three students pressed the deodorant canisters’ nozzles to the boy’s body, his mother said, causing burns and skin irritations on his back. She said it was one of dozens of incidents in which her son was subjected to violence, anti-Semitic jokes and intimidation.

The student complained to faculty but his mother said the teacher in charge ignored the complaints, even after her son asked for and got permission to stay indoors during recess to avoid harassment.

“She downplayed the situation each time we complained,” the mother, who was not named in LBCA and Belga’s reporting, told LBCA of the teacher. “My son is graduating from elementary school and will leave the school, but I am taking these actions so that teachers and the school administration realize they cannot disregard this bullying.”

The principal told Belga she was surprised by the allegations, adding the student in question did not appear to be unhappy, his behavior had not changed over the past two years and he had maintained excellent scholastic performance.

The principal said the teacher handling the mother’s complaint did not relay the anti-Semitic character of the harassment to her. She said the three students involved in the deodorant incident were reprimanded for their behavior, which they said was part of a game.

LBCA president Joel Rubinfeld told Belga he interviewed other students who confirmed the anti-Semitic nature of the “gassing” incident and the recurrence of jokes and taunts referencing the Holocaust in the student’s bullying by the three other classmates.

The case reported last week is one of several recent anti-Semitic incidents in Belgium, including the bullying of a high school student who was forced to change schools amid alleged inaction by the institution where the harassment occurred. Last year, Belgian media reported on the online shaming by classmates of a pro-Israel high school student who also left the public education system for a Jewish school.