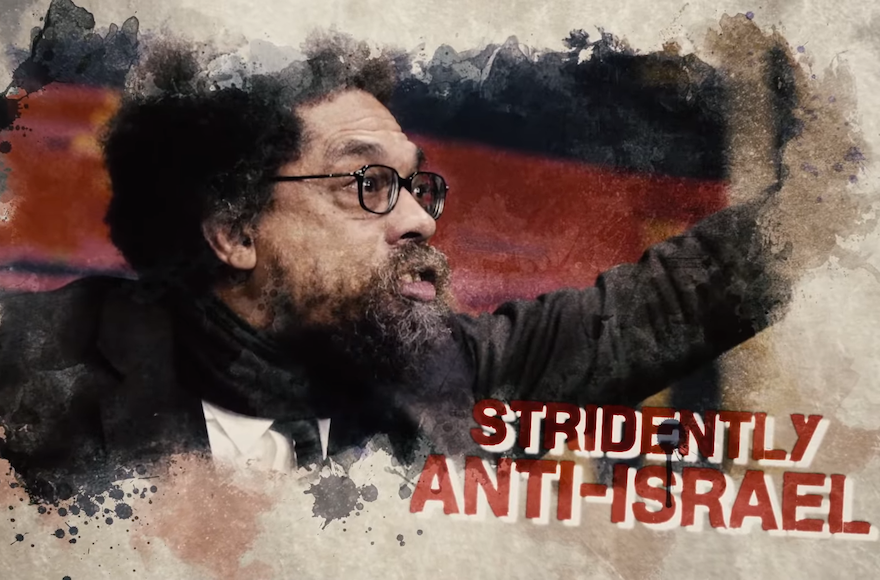 The three ads released Tuesday target, respectively, Cornel West, a philosopher who backs the boycott Israel movement; Rep. Keith Ellison, D-Minn., who has been critical of Israel’s treatment of the Palestinians, and James Zogby, the president of the Arab American Institute. All three were named to the committee by Sen. Bernie Sanders, I-Vt.

Each 30-second ad, backed by sinister music, features quotations attributed to its subject– only West is seen speaking – and accuses him of being “stridently anti-Israel.” Each finishes with a shot of a smirking Hillary Clinton, the presumptive Democratic nominee, while the narrator says, “It’s today’s Democratic Party.”

“As the presumptive Democratic nominee, it is up to Secretary Clinton to maintain the bipartisan consensus on Israel and to do so she must denounce anti-Israel voices in her party like James Zogby, Cornel West and Congressman Ellison,” an RJC statement quoted its director, Matt Brooks, as saying.

Clinton’s appointees to the committee, and the expert witness she sent earlier this month to testify to the committee, pushed back against the main Israel-related demand advanced by West, Zogby and Ellison: that the platform refer to Israel’s control of the West Bank as an “occupation.”

Of the three men targeted by the RJC, West has been most strident in his criticism of Israel. Zogby is a longtime Democratic Party operative who has for years helped shape language on the Middle East in the party platform. In the 1990s, he partnered with pro-Israel figures to promote investment in the Palestinian economy in the wake of the Oslo peace process, although that venture collapsed in 1997 in mutual recriminations.

Ellison, who is close to Minnesota’s Jewish community, assiduously notes the need for Israel’s security whenever he presses for Palestinian rights.

“I don’t blame the Israeli Prime Minister for his concerns,” Ellison wrote last week on the Huffington Post website, arguing for a more assertive push for Israeli-Palestinian peace.

Typically for Ellison, the Huffington Post piece, written just after he returned from a tour of the region, was also critical of some Israeli security measures.

“As the world knows, the Jewish people barely survived genocide,” he wrote. “My visit to Yad Vashem, the World Holocaust Remembrance Center, was a sobering reminder of how essential Israel’s security is. I can understand the fear. But higher walls, more arms, and curtailing people’s rights will not lead Israel to security. Diplomacy is a better path.”

The National Jewish Democratic Council, responding to the ads, took aim at Donald Trump, the presumptive Republican nominee, who has been criticized for his broadsides against minorities and at the outset of his campaign said he would be neutral when brokering Israeli-Palestinian peace.

Calling Trump “racist, sexist and bigoted,” the council said: “As they oppose the only consistently pro-Israel nominee in this race, this is going to be a tough year for RJC – all while more and more of their people stand with Israel and strengthening the US-Israel relationship by abandoning Trump.”

Trump more recently has said he naturally leans toward Israel and has sworn to protect it.

Eric Walker, the spokesman for the Democratic National Committee, said the RJC was “grasping at straws.”

“Attacking a few individuals serving on a platform subcommittee won’t cut it when the Republican nominee wants to make Israel pay us back for defense aid, fails to disavow David Duke and the KKK, approves a white nationalist as a delegate and then dismisses it as a ‘database error’ and has ‘no message’ for his anti-Semitic followers who harass Jewish reporters,” Walker said.

Trump has said he would consider charging Israel for defense assistance, and did eventually renounce Duke.