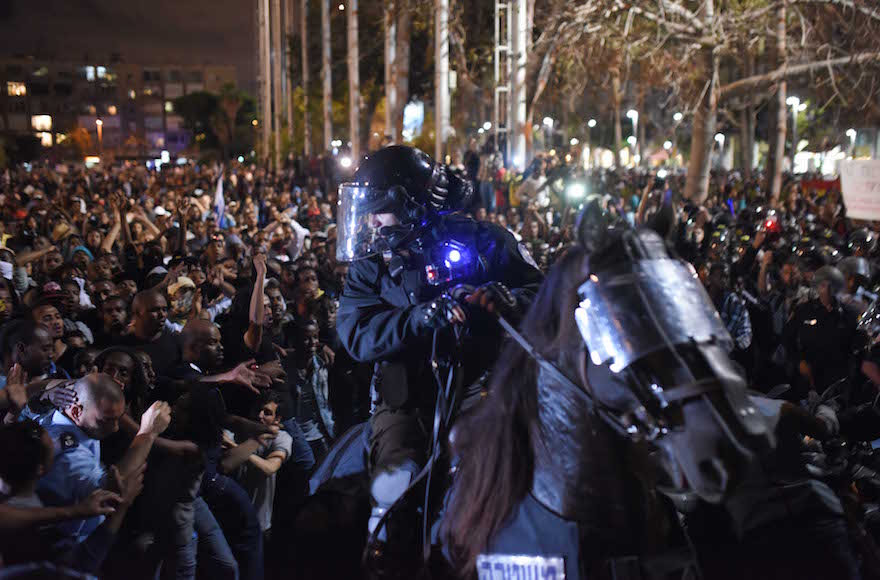 An Israeli policeman tries to disperse the hundreds of demonstrators in Tel Aviv protesting on behalf of Ethiopian-Israelis, May 3, 2015. (Ben Kelmer/Flash90)
Advertisement

JERUSALEM (JTA) — A report on eradicating racism against Israelis of Ethiopian origin was delivered to Israeli Prime Minister Benjamin Netanyahu.

The 170-page report by an inter-ministerial team acknowledges that racism and discrimination are faced daily by Ethiopian Israelis and presents 53 conclusions and recommendations.

“I am not prepared to tolerate racism in our state. I am not prepared for people to be tripped up by the color of their skin. This is terrible,” Netanyahu said in a statement issued Sunday night after he received the report. “We, on the ministerial committee, have heard heart-rending and hair-raising stories and we started to take action against racism even beforehand. But now, in the wake of this report, which is part of our decisions, we will take further steps and I am pleased that there are people, men and women, who are determined to uproot this phenomenon from our lives. This befits neither our country, our citizens nor our people.”

The recommendations reportedly include establishing a Justice Ministry unit to fight racism, training fore educators and anti-racism seminars for employees and employers.

The report was scheduled to be debated Monday by government ministers who are expected to vote to accept the recommendations.