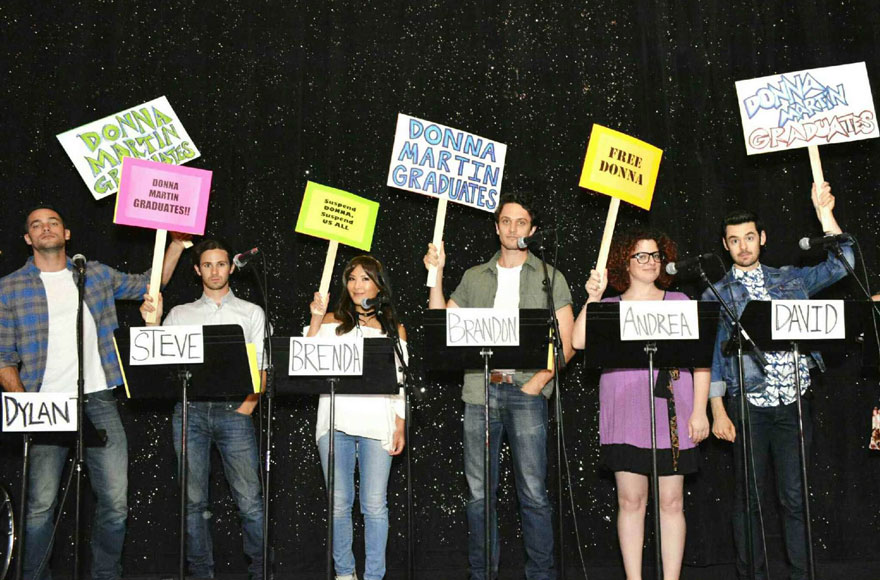 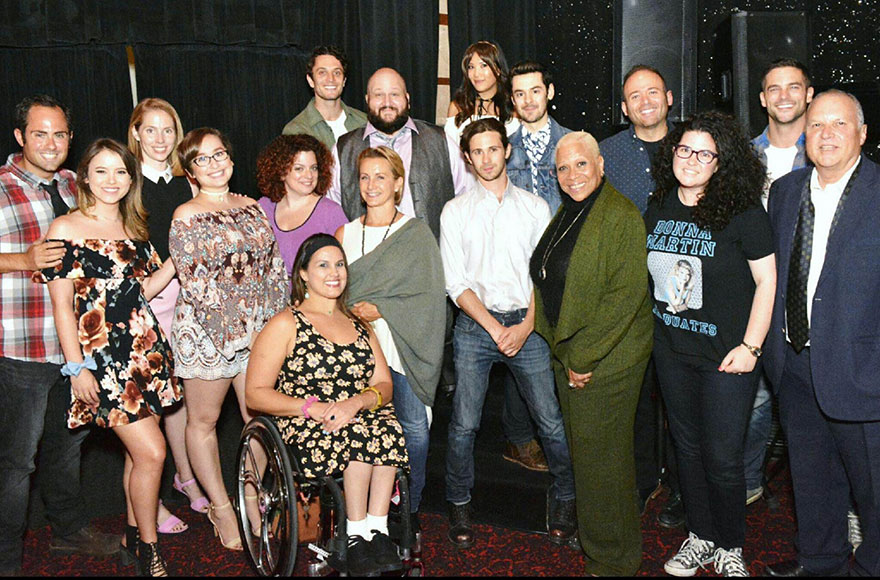 The cast and crew of “Donna Martin Graduates,” including Lizzie Leader and Kat Spada, third and fourth from left, Gabrielle Carteris, seventh from left, and Denise Dowse, fifth from right. Lindsay Rosin is third from right. (Courtesy of Abel Armas)

BEVERLY HILLS, CALIF. (JTA) — Back in the 1990s, the Fox series “Beverly Hills, 90210″ tackled eating disorders, gun safety, addiction and AIDS in a tone so earnest that it seems quaint in the era of  “Girls” and “Broad City” — shows that eschew the moralizing of TV generations past.

In what may be the most famous episode of the teen drama’s 10-season run, West Beverly High School seniors get a lesson in student activism. The cause: overturning Donna Martin’s school suspension. The movement’s rallying cry: “Donna Martin Graduates!”

Last week that now-iconic call to action, which has followed Tori Spelling, the Jewish actress who played Donna, ever since, lent its slogan to a live benefit for Jewish Family Service of Los Angeles and the Geena Davis Institute on Gender and Media.

The event, “Donna Martin Graduates,” took the form of a staged reading of the episode. For the uninitiated: Donna is facing disciplinary action, after showing up drunk to her senior prom. The cosseted daughter of a surgeon and a socialite may have to go to summer school instead of graduating in June with her friends. The injustice, if you will, inspires a walkout during finals. It culminates with student leader Brandon Walsh (played by the heartthrob Jason Priestley) telling the school board “we’re all here because we believe in something” with as much conviction as if he were opposing war or police brutality.

“They are protesting like there was an actual human rights violation,” said Kat Spada, 29, who co-hosts with Lizzie Leader The Blaze, a popular podcast about “Beverly Hills, 90210.” “Donna actually broke the law, and her friends are like, ‘We cannot let this stand.’”

On Thursday evening at the Ahrya Fine Arts Theatre here, the causes that brought together some 300 people — many of whom watched the series faithfully as teenagers (and are now pushing 40) — were more admirable: Jewish Family Service, a charity that dates back to 1854, provides mental health counseling, hunger relief and shelter for victims of domestic violence, among many other social services. The Geena Davis Institute, meanwhile, works to improve gender balance in entertainment, and to promote positive portrayals of women onscreen.

Leader and Spada, who bonded in college over DVDs of the series, organized the event independent of the charities it benefited. (Fundraising is ongoing.) Lindsey Rosin, a writer and theater producer, directed the performance, which featured two “Beverly Hills, 90210” cast members: Gabrielle Carteris, who played Andrea Zuckerman in the TV series (but played Donna’s mother at the benefit), and Denise Dowse, who played Mrs. Teasley then and now.

Rosin, the daughter of “Beverly Hills, 90210” showrunner Charles Rosin, is active in Jewish Family Service’s young leadership division; Rosin’s husband and mother-in-law serve on the charity’s board of directors. “I love that it’s a Jewish organization, but that the goal is to help the entire city of Los Angeles — no matter race, religion, sexual orientation,” she told JTA. “I feel like young people, especially our friends, respond to that.”

Carteris, who is Jewish, has close ties to a related charity: Her mother endowed a fund benefitting single-parent families through Jewish Family and Children’s Services in the Bay Area.

The episode read aloud Thursday originally aired on May 12, 1993, but remains a cult classic among the youngest sliver of Generation X.

“It plays on all things ‘90210’ is about,” Carteris told JTA.  “Privilege, but also that we make mistakes, our humanity.”

Spada has her own theory about the longevity of “Beverly Hills, 90210,” and, especially, its best-known episodes.

“It was a different time for TV viewers,” she said, noting that in a pre-DVR and streaming era, everyone was watching the same episode at the same time, and probably never saw it again.

In today’s binge-watching culture, shows may burn brighter, but don’t have the same staying power, she said. “I don’t know how long we’ll be talking about Chad from the ‘Bachelorette.’ But 23 years later, everyone still knows ‘Donna Martin Graduates.’”

Indeed, the performers had the whole audience chanting the slogan.