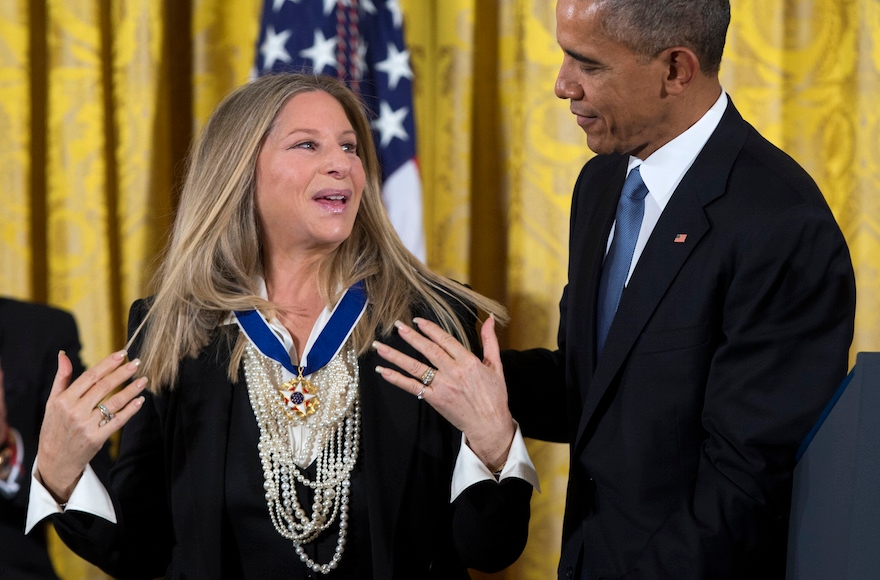 President Barack Obama, right, presenting the Presidential Medal of Freedom to Barbra Streisand during a ceremony in the East Room of the White House in Washington, D.C., Nov. 24, 2015. (Evan Vucci/AP Images)
Advertisement

If you’ve ever asked Siri who starred in “Yentl,” you’ll know that the iPhone robot has a problem pronouncing “Barbra Streisand.”

In an interview with NPR Saturday, legendary Jewish singer/actress Streisand said she recently complained to Apple’s CEO about its robot pronouncing the second syllable of her name as ZAND, rather than SAND, and that he agreed to have it fixed in the next update, which will be available Sept. 30.

Streisand, who is on tour and promoting a new album (her 35th), explained, “Streisand with a soft S, like sand on the beach. I’ve been saying this for my whole career. And so what did I do? I called the head of Apple, Tim Cook, and he delightfully agreed to have Siri change the pronunciation of my name, finally, with the next update on September 30th.”

The Brooklyn-born 74-year-old also revealed that she is working on a memoir.

“I never really did want to write a book ’cause it’s kind of — not just painful, but I’m a person who likes to live in the moment and think about the future. I don’t really like revisiting the past, but I thought I’d better do it now before my memory becomes more misty and water-colored, you know, like in the song ‘The Way We Were.'”

Spielberg and Streisand among 17 to receive Presidential Medal of Freedom