Iran is a contentious issue in first Clinton-Trump debate 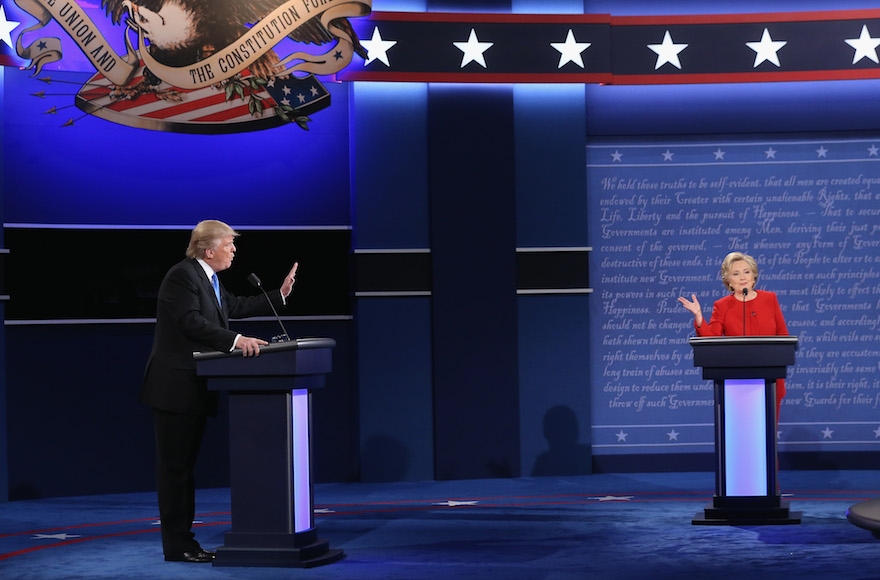 WASHINGTON (JTA) — The Iran nuclear deal was a key topic of contention in the first presidential debate between Donald Trump and Hillary Clinton.

In the national security portion of the debate Monday evening at Hofstra University in Hempstead, New York, Trump raised the deal reached last year between Iran and six major powers, led by the United States, which exchanged sanction relief for limits on Iran’s uranium enrichment and other nuclear activities.

“You started the Iran deal, that’s another beauty, they were about to fall” because of sanctions, Trump said. “They were choking on the sanctions and now they’re probably going to be a major power.”

The Republican nominee cited the opposition to the deal by Israeli Prime Minister Benjamin Netanyahu, referring to a meeting he and Netanyahu had on Sunday.

“I met with Bibi Netanyahu the other day. Believe me, he is not a happy camper,” Trump said.

Clinton, a former secretary of state and U.S. senator from New York, forcefully defended her role in shaping the sanctions.

“We had sanctioned them. I voted for every sanction against Iran when I was in the Senate,” said the Democratic nominee, who served from 2001 to 2009, “but it was not enough. So I spent a year forming a coalition, including Russia and China … to drive them to the negotiating table.”

Clinton said the deal freed the United States to deal with other Iranian acts, including the Islamic Republic’s backing of terrorism and record of interfering in other countries.

“Personally, I would rather deal with the other problems having put that lid on their nuclear program,” she said.

The debate, moderated by NBC anchorman Lester Holt, covered a range of issues, including international trade, crime and race relations. Trump sought to portray Clinton as a status quo politician, and Clinton made pointed attacks on Trump’s temperament and controversial record on race and women.