Why Trump dominated Jewish coverage of the 2016 campaign 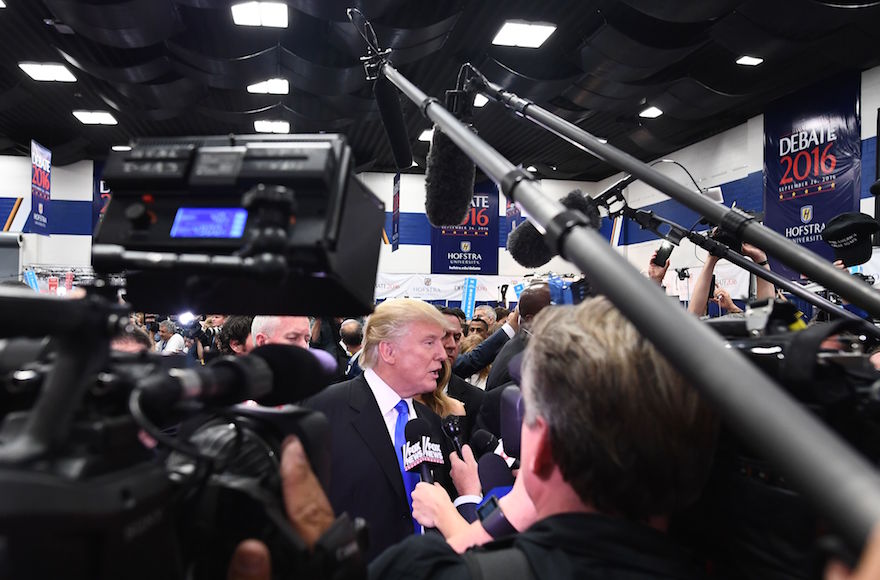 (JTA) — On Monday, one day before Election Day, I received a call from a reader. She identified herself as a Reform Jew, 46, from Chicago. She had praise for JTA and our daily newsletter, but also a complaint: Our emphasis on the Trump campaign, including charges over the weekend that a campaign ad of his was reminiscent of anti-Jewish propaganda, led readers like her to believe that we were clearly biased in favor of Hillary Clinton.

I was able to say in all honesty that our staff had been discussing that very idea moments before she called. On our homepage that morning were 11 stories about the campaign. Four of the stories I would call “neutral” in the sense that they focused on both candidates (one reported on a poll in Israel, another on Israeli Prime Minister Benjamin Netanyahu saying his government won’t intervene in the U.S. elections).

Six stories focused on Trump or his campaign. No story focused exclusively on Clinton or hers.

That suggests something, but not political bias. We try to be an unbiased source of Jewish news, but first and foremost a source of Jewish news. And this sample of our daily coverage demonstrates what we’ve noted throughout the campaign: Trump, his campaign and his minions created the more compelling Jewish story.

Think about it: A Jewish daughter. A Jewish son-in-law who serves as his top adviser. An ever-evolving Middle East policy. A vocal minority of supporters who traffic in the worst kind of anti-Semitic trolling. Accusations that his campaign staff either doesn’t understand the ways it courts or comforts those trolls or simply doesn’t care. A strained relationship with Republican Jewish donors and other influentials.

By contrast, Clinton’s Jewish story line is pretty thin and unsurprising. We’ve known for years how she stands on Israel (left of Netanyahu, right of Barack Obama) and Iran (backed the deal, vows to aggressively monitor Iran’s compliance). She kissed Suha Arafat in 1999, but served a fairly uncontroversial term as senator from New York beginning shortly thereafter. She is married to the convener of the Oslo Accords, who is, depending on whom you ask, Israel’s greatest friend or its worst enemy. She and Joe Biden have Jewish children-in-law (whose names you probably don’t even know).

Hillary Clinton may be controversial in other ways, but when it comes to Jewish issues, she is a known quantity. You can write about her stated positions and historical record on Israel on Iran — and we have — but once you do, you’re essentially done. Trump’s brand is chaos, hers is control. Trump’s campaign is the media equivalent of a shofar blast — or 100 in a row. Hillary is the synagogue treasurer, mumbling through the weekly announcements. One makes you pay attention. The other is someone you listen to politely if you’re not already asleep or out the door.

Trump has managed to spotlight Jewish concerns and obsessions, but the spotlight mostly shines on him, the Republican candidate.

This wasn’t the case in the past two elections. When Obama ran against John McCain in 2008 and Romney in 2012, there were compelling arguments and story lines on both sides about “Jewish” issues, especially Israel. The Republicans had managed to shape themselves as the more “reliably” pro-Israel party, at least in the eyes of Netanyahu and the groups and individuals who shared his security-first vision. Democrats were more likely to be aligned with an Israeli minority that supported a dormant peace process. That led to a lot of stories about whether the Jews were ripe for a political realignment.

At home, Obama had the Reverend Wright albatross to contend with as well as rumors about his coziness with the Muslim world; McCain shackled himself to Sarah Palin and stalled the inroads that the GOP was making among Jewish voters for at least another four years. Netanyahu made clear that he was no fan of Obama, and Obama treated him in kind, a story line that kept the Jewish media busy before and after Obama’s second-term victory.

These were typical issues that played out in normal ways. Who’s better for Israel? How do you define “better”? Should the pro-Israel lobby abandon its decades-long commitment to bipartisanship? Is Israel the only issue that Jewish voters do or should care about? Would the bubbe and zayde vote tip Florida?

This time around, none of these issues seems to matter. Trump, who blew up the entire notion of a “typical” politician, undermined the old categories — in Jewish journalism and everything else. It was hard to talk about Israel policy when Trump himself was barely expressing a foreign policy, had no meaningful track record on the issue and made statements on the region that often were contradictory. (The campaign’s most detailed statement of its Israel policy arrived only six days before Election Day, and left ambiguous whether all of its points came from the candidate.) Israel barely came up at the three presidential debates, and the Iran stuff seemed like an afterthought. As for the great Jewish political realignment — not this year, anyway. Trump barely made inroads into the Republican Jewish Coalition, let alone among American Jews as a whole.

But Trump managed to make “Jewish” news anyway in ways that Clinton didn’t and probably wouldn’t want to match. At least three times — in retweeting the infamous “Star of David” anti-Hillary meme, in a Florida speech railing against “international bankers” and in this week’s campaign ad doubling down on the global conspiracy theory — Trump raised alarms among Jewish watchdog groups and everyday readers about his intentional or merely careless broadcasting of popular anti-Semitic tropes.

Beyond his control, perhaps, were the self-proclaimed Trump followers on the self-proclaimed “alt-right” attacking Jewish supporters who criticized their candidate with vile anti-Semitic tweets and threats. The guy at the Trump rally shouting “Jew-S-A.” Donald Trump Jr. using an ill-advised “gas chamber” analogy to complain about the media’s double standards. Trump’s stumbling path to a disavowal of former KKK leader David Duke.

Ivanka Trump and Jared Kushner were their own fount of Jewish stories, from how they were dealing with the accusations of anti-Semitism to the decision by their rabbi to withdraw from a speaking engagement at the Republican National Convention to the mere fact of their celebrity Jewish marriage at the heart of Trumpland.

Trump also attracted the lion’s share of our attention as journalists for another reason: No one had ever seen anything like him. Week by week, sometimes day by day, Trump would do or say something that in a normal election year would be seen as the campaign’s defining story. Sometimes a Trump outrage would barely be the most interesting or controversial thing he did or said that day. You tuned into Trump news like a fisherman checks the weather reports — the sky is always changing, and there is bound to be a storm.

That’s not to say that Hillary is not a flawed person or politician — but she is in most ways normally flawed. Her secretiveness undermines her, and her own sense of infallibility leads her to ignore what so many other see as reckless conflicts of interest. She rails against special interests one day, gives a top-dollar speech to a bank on another. In most ways that makes her a politician, not a criminal. It was news when the FBI dug into her emails, and it was news when it found no criminal wrongdoing, but it wasn’t exactly Jewish news.

My Chicago caller said she was most concerned about the rise of anti-Zionism and anti-Semitism on the far left, suggesting that was an area we had undercovered in reporting on the campaign. But we did cover it when Clinton was still in a tough race against Bernie Sanders and the issue was in play. Sanders, while an avowed defender of Israel, also spoke about Palestinian rights in a way attractive to the left wing of the party. The Democratic National Committee allowed him to appoint five people to its platform drafting committee, and three of his picks were frequent critics of Israel.

In the end, however, Clinton defeated Sanders decisively, and the party rejected the main ask of the Sanders people: language calling for Israel to end its occupation of the West Bank and settlement activity. And we covered that battle.

There are some things I wished we had done differently in covering the campaign. We wrote a number of articles about Trump’s appeal (or lack thereof) among Orthodox voters, but too few about Clinton’s appeal (or lack thereof) among the Jewish majority that is bound to vote for her. I would have liked us to do more on the influential “Never Trump” Jewish Republicans and what splits in both parties augur for the future of Israel as a foreign policy issue.

But I don’t regret our focus on Trump and what his ascent has meant to the country as a whole and Jews in particular. Telling that story well was more essential than creating a false “balance” between two very different candidates.