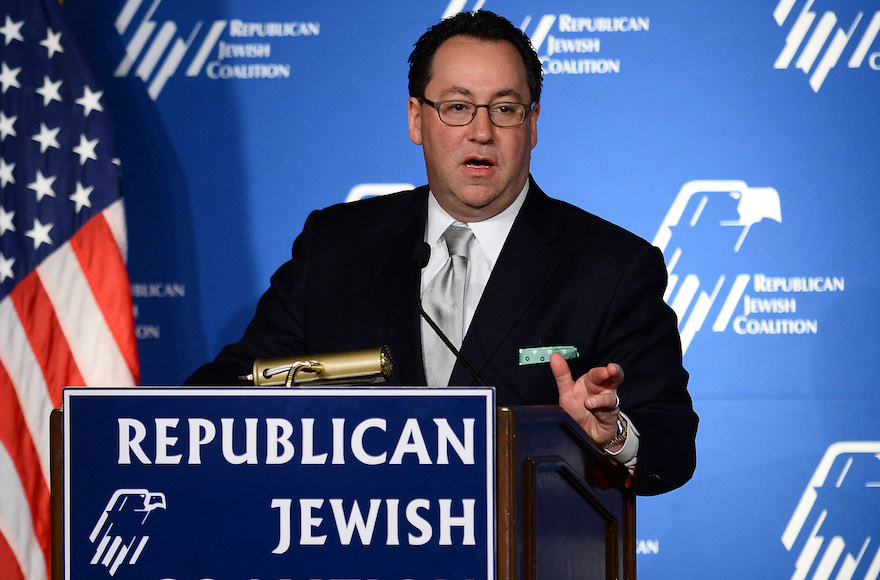 WASHINGTON (JTA) — The top official of the Republican Jewish Coalition said the Anti-Defamation League had potentially compromised itself with its criticism of President-elect Donald Trump’s words and actions during the campaign.

The attack by the RJC on the venerated Jewish civil rights group — and an implied warning of more to come — signaled fraught times ahead for the more liberal precincts of the American Jewish community as they seek to establish ties with the nascent Trump administration.

Until now the RJC had not singled out the ADL, or any Jewish group, for criticizing Trump’s rhetoric, and notably was in retreat during the campaign when it came to stumping for the nominee.

“It seems to me at critical times [in the] course of this campaign, a pattern emerged that the ADL put their thumb on the scale in a way that hadn’t been done by [Jonathan] Greenblatt’s predecessor, Abe Foxman,” Matt Brooks, the director of the Republican Jewish Coalition, said Wednesday in a post-election conference call, referring to the current national director and his longtime predecessor.

“The ADL has put itself in a potentially compromising position going forward” in terms of its relations with the next administration, Brooks said. “We’ll have to see about that.”

Responding to Brooks, the ADL said its bailiwick was to point out anti-Semitism and bigotry wherever it was manifest.

“The Anti-Defamation League has never taken sides in elections,” Greenblatt said in a statement. “For more than one hundred years, we have called out anti-Semitism and other forms of bigotry whenever we see it and wherever its source. This is not a matter of politics, but of principles. As President-elect Trump said last night, ‘it is time for us to come together as one united people,’ and we look forward to working with the new Administration — and all Americans — toward that goal.”

Trump, who won Tuesday’s presidential election in a stunning upset, presented a dilemma for the ADL: Speaking out against his stream of broadsides targeting minorities, as well as his peddling of conspiracy theories and imagery rooted on the anti-Semitic right, placed the group in the middle of a partisan fight.

On the other side, the ADL would have faced criticism from the left had the group, whose mission is identifying and denouncing bigotry, refrained from speaking out when Trump disparaged Latinos, Muslims and others.

Jewish liberals on social media have routinely called out mainstream Jewish groups for remaining silent on Trump. The groups in turn have said that their tax-exempt status could be put at risk if they weighed in. Bend the Arc, a liberal activist group that openly attacked Trump through an affiliated political action committee, repeatedly called on Brooks’ RJC to speak out against the candidate.

The contretemps between the ADL and RJC also signaled that Republican Jews, who have been ambivalent about the success of the often erratic outsider who assumed the leadership of their party, may gingerly be seeking a way into his good graces.

The ADL, more than any other mainstream Jewish group, had criticized Trump for encouraging or condoning bigotry.

Trump’s top Jewish aides have angrily dismissed the ADL’s claims, accusing it of being partisan. Brooks in the conference call said that attaching the stigma of anti-Semitism to Trump, whose daughter is Jewish, was a “bridge too far.”

Yet the RJC was notably silent on the ADL’s criticism of Trump before Election Day. Indeed, it had vigorously held back from pronouncing one way or another on the nominee.

When Trump secured the nomination in May, the RJC “congratulated” Trump but did not otherwise praise him. In contrast, when Trump named his running mate, Indiana Gov. Mike Pence, in July, the group was effusive in its praise of Pence, a longtime friend to the RJC.

A considerable chunk of Republican Jewish donors cut off Trump, disgusted with what they said were the reality TV star’s history of bigoted statements as well as his offensive remarks about women. The RJC maintained a low profile at the Republican convention in Cleveland in July, closing its events to the press after having welcomed the media to watch Republicans in previous years celebrate the nominee.

Only nine of the RJC’s 55 board members contributed money to the Trump campaign, a sharp drop from previous elections, although Brooks and RJC spokesman Fred Brown on Wednesday said the metrics were different this election. Previous nominees had solicited funding for their campaigns, but Trump directed donors to the party as well as his campaign, they said, and Jewish contributions to the Republican National Committee remained robust.

Brooks said it made more sense during the campaign for the RJC, campaigning among Jewish voters who tended to see Trump in a negative light, to focus less on Trump and more on Clinton’s negatives.