In France, a fundraiser for pets ended up unleashing rabid anti-Semitism

(JTA) — When he locked himself up for three days inside a cage at an animal shelter in France, standup comedian and video artist Rémi Gaillard sought to raise awareness and money for abandoned pets.

But Gaillard’s fundraiser last week took a nasty turn, unleashing a vulgar shaming campaign with anti-Semitic dog whistles against Elie Semoun — one of the country’s best-known comedians, whose only sin was declining to help Gaillard’s cause. 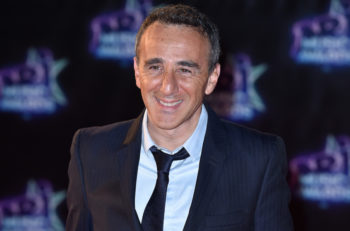 The affair, which perhaps illustrates how Jew-hatred never lies too far beneath the surface of French society today, turned sour last Monday. That was shortly after Gaillard completed his televised stunt on behalf of the needy animals. At some point, Gaillard learned or suspected that his fellow comedian hadn’t supported his charitable turn, leading Gaillard to  post on Twitter an obscene caricature of his better-known colleague Semoun, who is Jewish, performing oral sex on a cartoon television set.

The tweet referred to Semoun as a “television whore” who refused to support Gaillard because “he has an image.” Gaillard noted his 72-hour stay in the cage led to donations of more than $200,000 despite Semoun’s alleged refusal to help. It was retweeted almost 6,000 times and received 5,300 “likes.”

Taking the high road, Semoun replied by tweeting a picture of his three cats, which he said he had rescued, adding they are sending kisses, “purrs and love.” Meanwhile, some members of France’s stand-up scene defended Semoun, saying Gaillard’s attack against him was uncalled for.

The exchange might have ended there had it not caught the attention of Dieudonne M’Bala M’Bala — another comedian and a former friend and partner of Semoun before he became a “professional anti-Semite,” as French Prime Minister Manuel Valls called Dieudonne for his multiple convictions for incitement for hatred against Jews.

The latest conviction handed down to Dieudonne — who has suggested the Holocaust never happened and that Jews invented it to make money off of it — came after he invited listeners to imagine him sexually violating Ilan Halimi, a 24-year-old phone salesman from the Paris area who was murdered 10 years ago by kidnappers who targeted him and tortured him because he was Jewish.

On Nov. 15, Dieudonne posted online a video entitled “Dieudonne supports Rémi Gaillard versus Elie Semoun.” In it, he applauded Gaillard for insulting Semoun and repeated the insult, calling his former partner a “whore.” 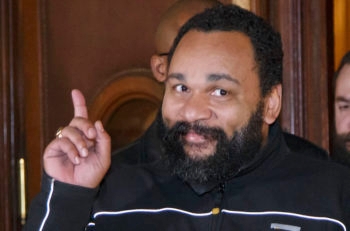 That video has been viewed nearly 100,000 times and touched off an avalanche of anti-Semitic comments on YouTube and other social media (one of them spoke of “Rothschild parasites”). It is also part of a long exchange between Semoun and Dieudonne — once close associates whose friendship was ruined as Dieudonne began pursuing increasingly anti-Semitic themes. Dieudonne, a performer of Cameroonian descent, co-founded in 2014 the “Anti-Zionist Party” together with the gay-hating Holocaust denier and skinhead Alain Soral. Despite far-reaching attempts by French authorities to silence him, Dieudonne’s anti-Semitic jokes, coded gestures and memes have earned him many thousands of fans.

In  a 2014 performance, Semoun said that Dieudonne was inciting hate in the guise of
comedy.

“It’s like a guy who tells you: ‘You’re an asshole. No, I’m just kidding. All Arabs are terrorists. No, just kidding,’” Semoun said of Dieudonne.

But during an appearance on a talk show that same year, Semoun conceded that he is both scared of his former buddy and that he still has affection for him.

“Dieudo has never told his followers to go after anyone specifically, and that’s a good thing because it can hurt,” Semoun said. “They’re not really fans, they’re more like militants.”

In turn, Dieudonne said he doesn’t perform with Semoun because spectators might hurl pineapples at him instead of tomatoes. It was a reference to the term “shoananas” — a mashup between the Hebrew word for the Holocaust and the French word for pineapples, which Dieudonne coined to offer fans a way of mocking or denying the Jewish genocide without violating French laws banning Shoah denial.

Still, after all that, Semoun said in 2014 that he still has “a lot of affection” for Diedonne. “We grew up together and there’s no one else with whom I shared all I’ve shared with Dieudo,” Semoun said.