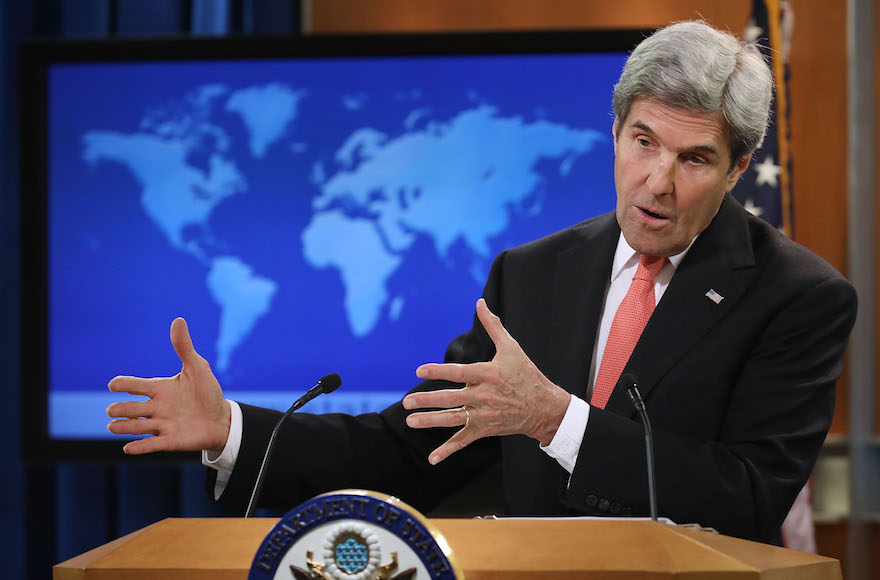 WASHINGTON (JTA) – John Kerry in his final news conference as secretary of state listed the Iran nuclear deal and securing Israel as among the Obama administration’s accomplishments.

The 2015 agreement between Iran and six major powers led by the United States “is a demonstration, quite simply, of the power of diplomacy to be able to address major international problems short of war,” he told reporters on Thursday.

“The Joint Comprehensive Plan of Action has made the world and our allies safer, including Israel and the Gulf states,” Kerry said, using the formal name for a deal exchanging sanctions relief for a nuclear rollback.

Israel and the centrist and right-wing pro-Israel lobbies opposed the Iran deal, saying that by allowing Iran to maintain a civilian nuclear program and because parts of the agreement phase out in a decade or so, the deal increases the dangers of a nuclear Iran in the future rather than limits them.

Republicans also opposed the deal, and President-elect Donald Trump has said it is a “bad deal,” although he has not committed to scrapping it. Trump takes office on Jan. 20.

Kerry noted that since the deal’s implementation last January, Iran has drastically rolled back its nuclear program under the watch of U.N. inspectors.

“The agreement itself creates the most rigorous inspection regime that has ever been negotiated,” he said.

Kerry also noted in listing what he depicted as the Obama administration’s foreign policy successes – among them a climate change treaty, enhanced health care for children worldwide, and diminishing the influence of the Islamic State terrorist group — increased security assistance for Israel. President Barack Obama signed a 10-year, $38 billion military aid package for Israel in September.

“Our level of security support to a democratic Israel is unprecedented,” he said.

Kerry has been on the defensive on Israel policy since late last month when the Obama administration allowed through a U.N. Security Council resolution opposing settlements in all parts of areas captured by Israel in 1967, including eastern Jerusalem, the site of the Western Wall.

The United States abstained but did not exercise its veto. Obama administration officials said that while the resolution lacked balance, they agreed with its premise that settlement expansion was an obstacle to peace and endangered a two-state outcome to the Israeli-Palestinian conflict.

Kerry defended his efforts to advance peace, including a failed bid to reach an agreement in talks in 2013 and 2014.

“Now, obviously we haven’t solved every problem,” he said. “No, we haven’t. The Israeli-Palestinian conflict continues, but we are absolutely right to support a two-state solution and to warn about the danger of actions on any side that could obstruct that possibility.”