Obama: ‘No basis in fact’ to accusations US orchestrated UN anti-settlements vote 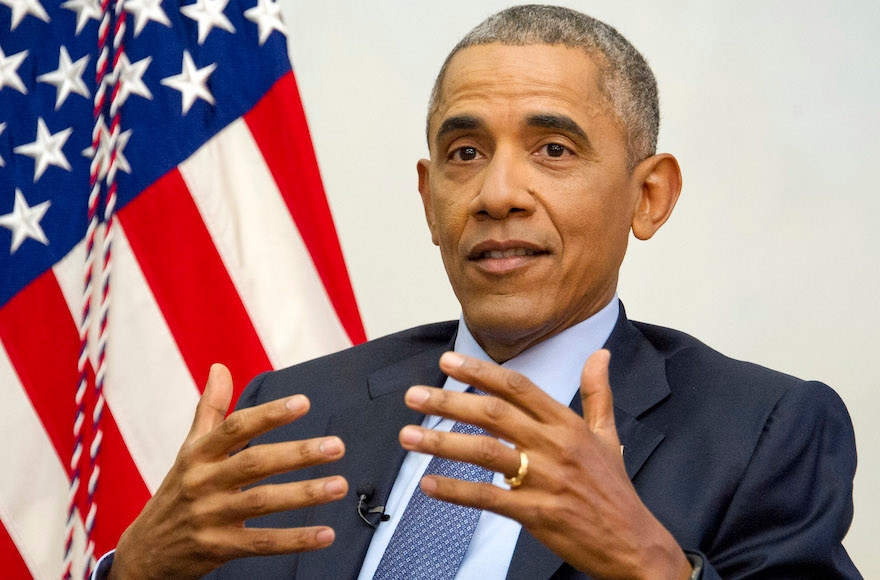 Barack Obama in an interview with Vox at the Blair House in Washington, D.C., Jan. 6, 2017. (Ron Sachs-Pool/Getty Images)
Advertisement

In one of his final interviews as president, Obama spoke to Ilana Dayan, a reporter for Israel’s Channel 2, who has interviewed him in the past. The interview is to be broadcast Tuesday, but Channel 2 teased a portion on Monday.

Dayan asked Obama about Prime Minister Benjamin Netanyahu’s claim that the U.S. abstention allowing through the Security Council resolution was “shameful” and about Israeli ambassador to Washington Ron Dermer’s claim that there was evidence that the Obama administration orchestrated it.

“I’ll be honest with you, that kind of hyperbole, those kind of statements, don’t have basis in fact,” Obama said. “They may work well with respect to deflecting attention from the problem of settlements, they may play well with Bibi’s political base as well as the Republican base here in the United States, but they don’t match up with the facts.”

U.S. officials said they could not vote for the resolution, advanced by four countries led by New Zealand, because it was imbalanced and because the United Nations itself is an inherently antagonistic forum to Israel. However, they said they could not vote against it – triggering an automatic veto — because they agreed with its premise that settlements were undercutting prospects for peace and a two-state solution. The officials adamantly denied they led the effort to advance it.

President-elect Donald Trump objected to the resolution and tried to thwart it. It was the first resolution opposed by Israel that the Obama administration allowed through.

Obama also rejected criticism that he should not have allowed through a dramatic Security Council resolution in the last month of his presidency.

“The fact of the matter is that I’m president until Jan. 20 and I have an obligation to do what I think is right,” he said.

Dayan, describing the full interview, quoted Obama as saying that he was always a friend to Netanyahu, but that Netanyahu would not recognize his friendship.

In the clip that appeared on the Channel 2 website, she asked Obama if he has any more surprises in store for Israel, or will Netanyahu be able to “sleep well at night” until Jan. 20, when Trump assumes the presidency.

Obama, in an apparent allusion to Trump’s reputation for being unpredictable, replied: “There’s an interesting question as to whether he’ll sleep better after Jan. 20.”