‘Alt-right’ leader Richard Spencer got punched in the face. Why wasn’t Sarah Silverman happy about that? 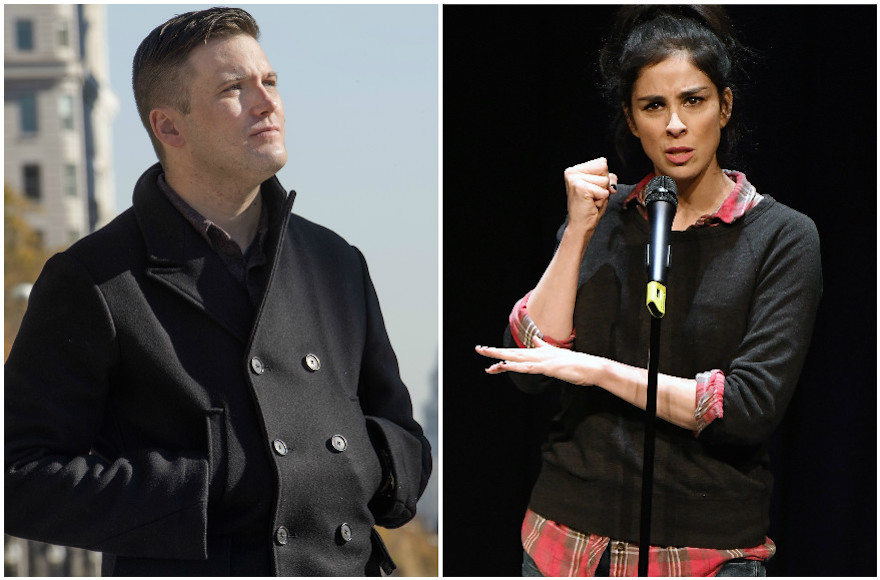 When Richard Spencer, left, was punched in the face and video of the event went viral, Sarah Silverman joined an online debate. (Getty Images)
Advertisement

It seemed like something that might possibly unite the Jews: Richard Spencer — figurehead for the infamously white nationalist “alt-right” movement — was punched in the face at an anti-Trump inauguration protest on Saturday.

While giving an interview to the Australian Broadcasting Corporation, Spencer was explaining the meaning of the Pepe the Frog symbol — a formerly harmless cartoon co-opted by the “alt-right” during the campaign season that the Anti-Defamation League has since entered into its hate symbol database. A masked man then appeared and punched Spencer in the side of the face before running away. Spencer didn’t press charges.

For some tweeters, the moment was the perfect opportunity to mock the maligned movement leader. Footage of the punch went viral and inspired a variety of memes and remixed videos featuring music for comic effect.

IT'S THE, PUNCH OF THE FREE WORLD IT'S THE HAND OF THE RIGHT, STANDING UP TO THE DEVILS OF THE NAZI'S #RichardSpencer pic.twitter.com/EnDbEm6LZd

anybody done this yet? pic.twitter.com/9Ath6xFuxf

Here is the cleanest video of the Richard Spencer punch I could find. pic.twitter.com/1VgmEpKK9p

But as The New York Times pointed out, the incident also sparked a debate on whether it is OK to punch someone, even if that person is a neo-Nazi. (Spencer has repeatedly said, as he did again on Saturday to the Times, that he is not a Nazi and that the term is outdated.)

In the midst of that debate, Spencer found an unlikely defender: liberal Jewish comedian Sarah Silverman.

Silverman tweeted that the man who punched Spencer was “wildly misguided” and lamented that the attacker would never be open to learning about non-violence.

Silverman then proceeded to respond to several tweeters who took issue with her.

Ooph Excellent point. How is fascism usually stopped? Asking for a friend https://t.co/vVkSJsgiB8

On Sunday night, Silverman revealed that she wasn’t fully aware that Spencer (and not some random Trump supporter) was the one who was punched and appeared to backtrack on whether he should have been hit.

The alt right coining cunt is who got punched? I hate violence ug shit I gotta think on this I'm supe conflicted on what's long-term right. https://t.co/3HAilSpUxy

Eventually, Silverman deleted her original tweet about the “misguided” man. But by the end of the night she felt pretty exasperated from the extensive debate.

I want my mom