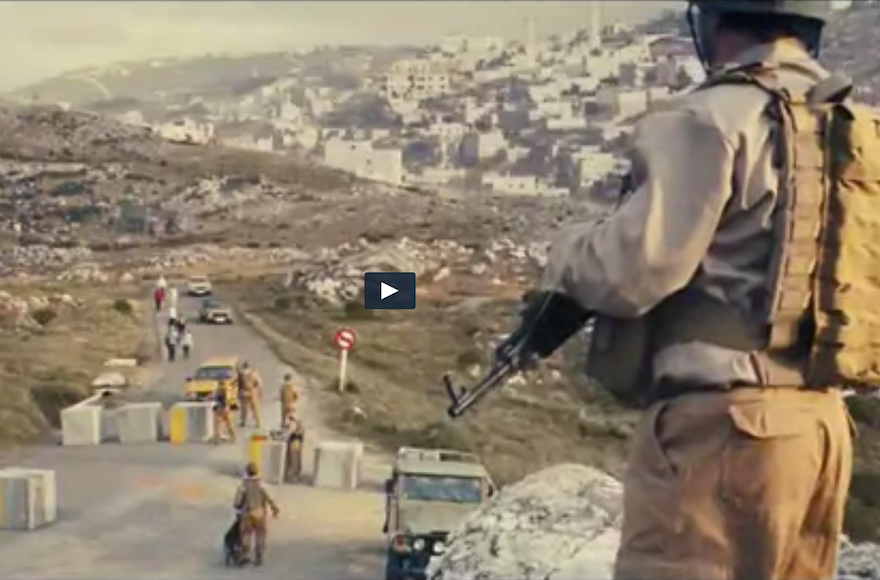 (JTA) — The Israel Defense Forces may have made a brief appearance during Super Bowl LI.

A 30-second ad by Expedia, the travel website, shows a montage of a woman traveling the world as she appears to age from a young girl to a middle-aged woman. At various stages of her life, she climbs a fence, traverses the Trans-Siberian railroad, rides a boat down a river, shares a kiss in what looks like China, helps water crops and aids refugees.

And in the middle of it all, she appears to drive through an Israeli roadblock in the West Bank.

The segment lasts about two seconds, beginning at 0:12. The shot opens on a scene that looks exactly like the West Bank: shallow, rocky green hills; a village of crowded, white, flat-roofed houses along with a minaret or two, and a narrow asphalt road obstructed by concrete blocks.

Armed soldiers in khaki uniforms, carrying guns, stop cars at the checkpoint. A military vehicle sits on the other side. The ad then briefly cuts to a young, bearded soldier who could easily be Israeli. In the next shot, the woman, now an adult, seems to stare uneasily and inquisitively from the back seat of a car. Next to her is a young woman with brown hair and what could be taken for Middle Eastern features — Israeli or Palestinian.

As the roadblock scene plays, the guru-like narrator intones, “Every step you take narrows the influence of narrow minds,” adding, as the scene shifts to one of refugees been rescued from an unidentified body of water, “bridges continents and brings this world one step closer.”

JTA reached out to Expedia to ask whether this was, in fact, an Israeli roadblock, and hasn’t received a response. A colleague has noted that several of the details — from the soldiers’ uniforms to their guns — are incorrect. But for a two-second segment where those details are fleeting at best, this sure looks like the West Bank.

If so, why the West Bank? The ad endeavors to show destinations that don’t show up on the typical American tourist itinerary; our protagonist isn’t cavorting around the Eiffel Tower or Coliseum, but seems to be visiting hot spots as a “voluntourist.” Perhaps the Israeli-Palestinian situation has become a shorthand for “unbridgeable” conflict, or an immediately recognizable symbol of “the influence of narrow minds.” Or maybe the segment was meant to be a stand-in for any tensely guarded border, from Kashmir to Afghanistan and Pakistan to Saudi Arabia and Yemen.

We’ll update this post with any response we receive from Expedia.