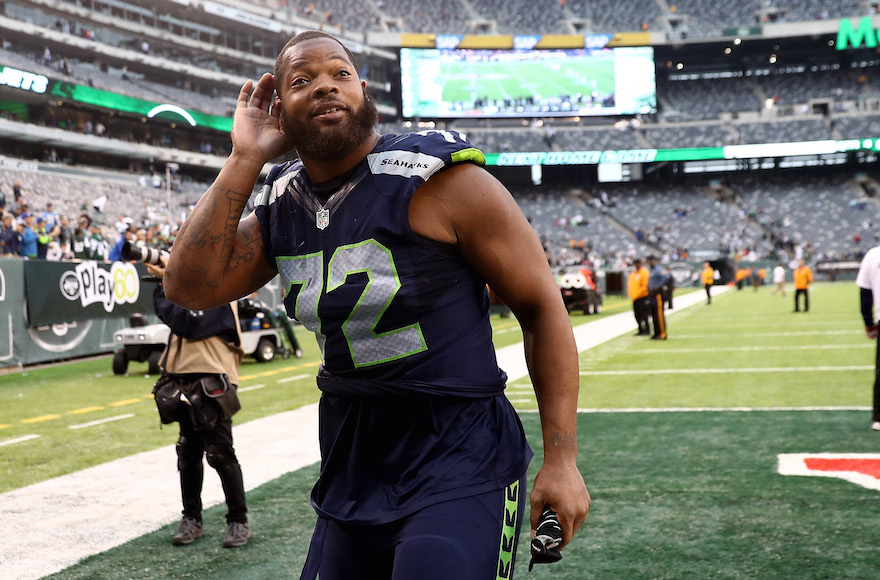 Michael Bennett of the Seattle Seahawks after a game against the New York Jets at MetLife Stadium in East Rutherford, New Jersey, Oct. 2, 2016. (Elsa/Getty Images)
Advertisement

(JTA) — Almost 30 years ago, the late theater impresario Joe Papp got into hot water when he canceled a scheduled production of a pro-Palestinian play at his flagship Manhattan theater, the Public.

Rumors flew at the time that he caved in to pressure from wealthy Jewish donors, but Papp — born Joseph Papirofsky but muted in his Jewish identity most of his life — had a more personal explanation: “Having so recently reasserted his Jewishness but having never presented an Israeli or Palestinian play,” a JTA article explained, “he didn’t want his first statement on the Israeli-Palestinian conflict to be seen as pro-Palestinian.”

Papp’s decision was seen at the time as a small victory by the pro-Israel camp, an insult to the Arab community — and an embarrassment by champions of artistic freedom. But at a news conference where Papp explained his decision, I heard something else: a curious citizen of the world who didn’t want to enlist in anybody’s propaganda war.

I remembered the Papp incident when I read that Seattle Seahawks defender Michael Bennett and some other NFL players were backing out of a trip to Israel sponsored by the Israeli government and America’s Voices in Israel, an initiative of the Conference of Presidents of Major American Jewish Organizations. Bennett apparently pulled out after reading an article about the trip in The Times of Israel, which included official statements by two Israeli Cabinet ministers saying the trip was intended to counter the Boycott, Divestment and Sanctions movement and the pro-Palestinian narrative about Israel.

Gilad Erdan, whose varied portfolio includes public security, strategic affairs and public diplomacy, said he hoped the visit would offer the players “a balanced picture of Israel, the opposite from the false incitement campaign that is being waged against Israel around the world.” Fighting BDS, he said, “includes hosting influencers and opinion-formers of international standing in different fields, including sport.”

Tourism Minister Yariv Levin hoped the players would come home with “positive stories about Israel” that would “counter distortions and misrepresentations about the Jewish state.”

On Feb. 8, Bennett tweeted that he was not going to Israel, complaining that “I was not aware, until reading this article about the trip in the Times of Israel, that my itinerary was being constructed by the Israeli government for the purposes of making me, in the words of a government official, an ‘influencer and opinion-former’ who would then be ‘an ambassador of good will.’ I will not be used in such a manner.”

He pledged to come to Israel one day, and to visit the West Bank and Gaza, “so I can see how the Palestinians, who have called this land home for thousands of years, live their lives.”

It’s not clear how much the players knew about the sponsors or the purposes of the trip before accepting. The America’s Voices in Israel Facebook page explains that it “organizes week-long missions to Israel for prominent headline-makers with widespread credibility,” in order to generate stories about Israel that “counter distortions and misrepresentations about the Jewish State.” Accounts of the trips show an itinerary heavy on holy and historical sites, fine dining and visits to Israel’s highly regarded human services sector, like a program for people with special needs. The trips are often led by Voices’ director, a rabbi with a background in right-leaning efforts promoting Israel.

Still, my guess is the players didn’t know much about the organizers. Nor did they appreciate the politically charged nature of visiting the region. Every country has a tourism board that tries to entice celebrities with free trips and deluxe accommodations. In recent years, the Golden Globes swag bag has included round-trip tickets to Fiji and a free stay at a five-star resort.

The difference is that Fiji is not a global hot spot, and if anyone is boycotting Fiji it has more to do with a bad Yelp review than an organized political campaign. The BDS movement is intent on demonizing Israel and shaming celebrities who don’t revile the country or are open to hearing both sides of the story.

The day before Bennett announced he wasn’t going, the Nation published an “Open Letter to NFL Players Traveling to Israel on a Trip Organized by Netanyahu’s Government.” Signed by Alice Walker, Harry Belafonte, Angela Davis and others, it is a model in the effort to de-normalize Israel. Quoting Erdan, they assert that the trip was “designed explicitly to improve Israel’s image abroad to counter worldwide outrage over its massacres and war crimes.” Addressing African-Americans like Bennett, they link the Palestinian cause to that of “black and brown communities in the United States.”

And their complaint is not just about the treatment of Palestinians in the West Bank, but a Jewish nation-state “with more than 50 laws that privilege Jewish citizens over non-Jewish citizens.” One of its strangest passages compares Trump’s travel ban on refugees with Israeli restrictions on migrants trying to enter the country illegally from its tense border with Egypt. (Needless to say, the letter does not address why these “asylum seekers” from Sudan and Eritrea see Israel as a more desirable destination than the countries they are fleeing and the Muslim-majority countries they must pass through to get there.)

Like the Israelis, the BDS groups who signed the letter also employ celebrities in the battle of hearts and minds — citing musicians like Lauryn Hill and Roger Waters who have refused to play in Israel. The question for Israel is whether it should fight fire with fire — celebrity with celebrity — in waging public diplomacy.

The good news for Israel is that its opponents often overplay their hand. BDS is not a “peace movement” in the sense that it wants two viable, secure states for Israelis and Palestinians. The letter to NFL players says BDS will target Israel until it “complies with international law and guarantees Palestinian rights” — an intentionally unspecific formula that coupled with the activists’ refusal to talk about a two-state solution or the Jews’ right to a state of their own suggests their ultimate goal is a single binational state.

Perhaps Bennett and the other no-show players caved to the BDS side, although the NFL story is playing in Israel as a fumble on the part of Erdan and Levin. By making explicit the implicit purpose of the “mission,” they put the players in an untenable position. Israel is understandably eager to seize on signs of normalcy in the face of the BDS assault. But sometimes discretion is the better part of hasbara. In recent years Israel has pushed the “Brand Israel” tactic of public diplomacy, backing efforts to promote Israel’s accomplishments in the arts, technology, science and gay rights. When the government’s fingerprints are obvious, such events have inspired protests at film festivals, museums and theaters.

Maybe the problem is contained in the word “mission,” borrowed by Jews from Christian evangelists and suggesting a trip meant to win converts. Perhaps a better model for these kinds of trips is a symposium or a fact-finding trip, exposing visitors not just to what makes Israel fun and inspiring, but to its challenges in all their complexity. If celebs knew they were going to get a range of perspectives on the country and the conflict, perhaps they’d feel more confident in telling the BDS crowd to back off.

To Bennett’s credit, he signals that he has an open mind, and that when he does visit, he’ll hear from both sides. If he does, he’ll experience an Israeli and Palestinian reality infinitely more complex — more multicultural, more historically aware, less reductive — than the patronizingly binary picture scrawled by the authors of the open letter. And he just might discover that Israel has the more convincing story to tell.