In bid to defeat Le Pen, French right-wing candidate cozies up to Jews 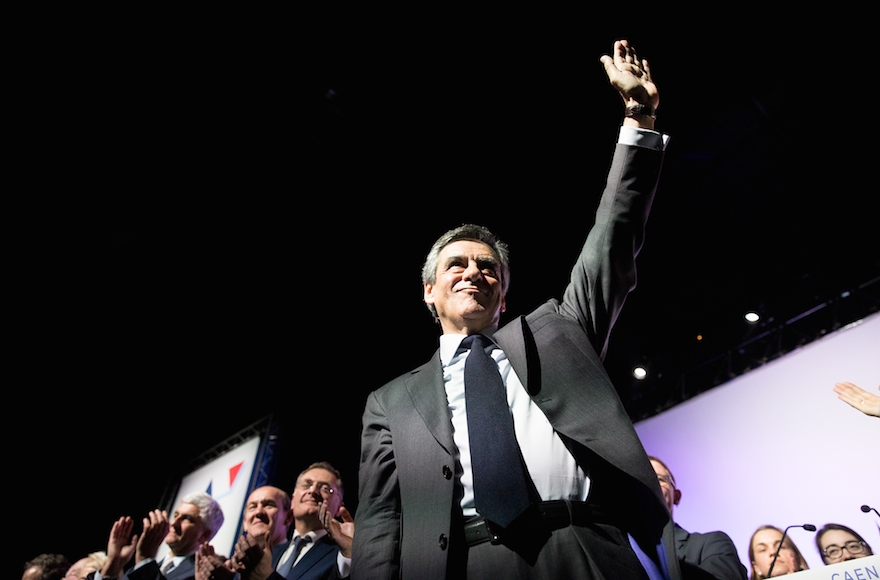 PARIS (JTA) — Even to his supporters, France’s center-right presidential hopeful Francois Fillon is a flawed candidate.

Dogged by corruption scandals Fillon, who represents The Republicans party of former President Nicolas Sarkozy, was indicted Tuesday for allegedly funneling public funds illicitly to his children and wife. Fillon, a career politician and former prime minister, has denied the allegations.

Nonetheless, his supporters are willing to forgive him these problems, as they see Fillon as likelier to beat the front-runner in the race, far-right candidate Marine Le Pen. Additionally, many of these supporters see him as more likely to act tough on radical Islam than his left-wing rivals.

But there is an added layer of complexity for Jewish backers of Fillon: The candidate has made vaguely critical remarks about ritual slaughter and said that at some indeterminate point in history, Jews had to be forced to obey French law.

On Monday, Fillon — who is running a credible third in the polls behind Le Pen and the centrist independent Emmanuel Macron — attempted to mend fences with French Jews. For the first time in his campaign, he attended a town hall meeting with some 700 members of the community organized by the CRIF federation of Jewish communities.

For Fillon, it was a partial success at best.

Dozens of supporters welcomed the candidate by chanting “Fillon President” at the meeting at a Paris hotel. Meyer Habib, a Jewish lawmaker and former CRIF vice president, endorsed him publicly. Fillon earned applause at least a dozen times when he pledged to support Israel and curb jihadism.

Nevertheless, the applause was weak and sporadic, and the audience questions were critical. By contrast, the former prime minister, Manuel Valls, who lost the Socialists’ primary election this year, received thunderous applause at similar gatherings.

Fillon rebuked France’s support for a UNESCO resolution passed last year that ignored Jewish ties to Jerusalem, calling it “an error and historical untruth that complicates peace efforts.” And he vowed never to normalize ties with Iran as long as that country “continues to call for Israel’s destruction.”

Fillon also promised to “be more careful,” in reference to his controversial remark last year during a radio interview in which he claimed Jews in the past had lacked respect for the rule of law. As for ritual slaughter, he assured the crowd that his comments from 2012, when he said that the practice “has little to do with modern science,” does not mean he would act to outlaw the custom.

Last year, French Jews and Muslims formed a joint effort to defend against attacks on kosher and halal practices.

“Jewish values, they are, well, they’re our values,” Fillon said. “Jews had a very major role in building the French republic,” he added, noting that Jews have lived in France “since time immemorial.” 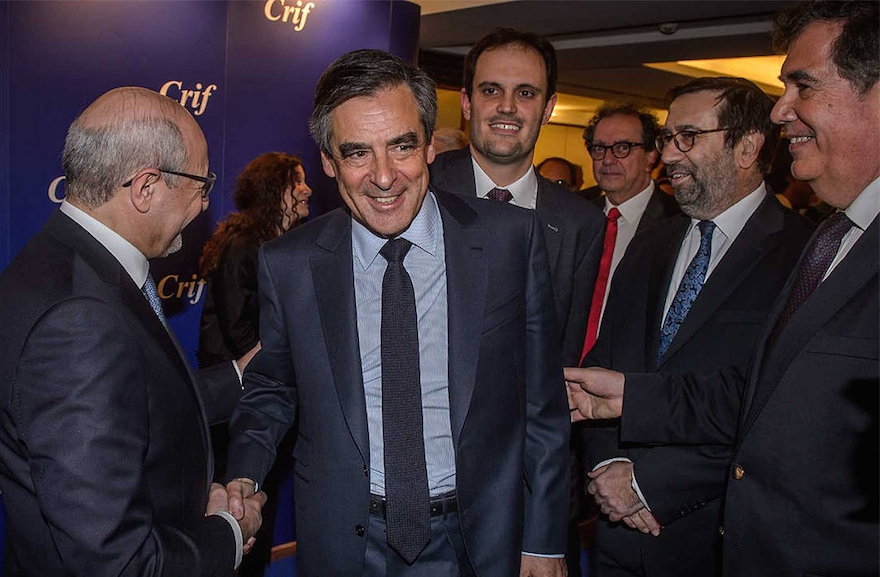 During the two-hour talk, Fillon made little effort to present any Jewish or pro-Israel credentials other than assuring the audience of his desire to curb anti-Semitism and radical Islam while defending French Jews. He repeatedly explained that he was their best defense against a victory for Le Pen.

“Without a candidate for the center-right, Mrs. Le Pen would have a field day,” Fillon warned. “Some in the right wing would express their anger by going so far as to vote for her.”

Many in the crowd remained uninspired by Fillon’s bleak description of French society, and were unimpressed by his failure to apologize for mismanaging his financial affairs and accusing Jews of lawlessness.

“He’s precise and logical, but I heard nothing that will inspire young people or instill hope in the minds of those seeking meaningful change,” said Emmanuel Attlan, a 30-year-old finance executive who attended the meeting.

“He’s got nothing but fairy tales to offer,” said Henry Battner, president of the Farband association of Ashkenazi French Jews.

Serge Sznajder, a scholar on Eastern Europe and a Farband board member, used Yiddish to describe is impression of Fillon.

“Let me sum it up this way: Gurnisht,” he said, which means “nothing.”

Fillon, Sznajder said, “is not against Jews, he just doesn’t know us, doesn’t get us, he has no idea, he never had too many dealings with Jews in Sablé-sur-Sarthe,” Sznajder added, naming the countryside town where Fillon began his political career in 1983.

Both Szajder and Battner said they will vote for Macron.

Albert Cohen, 53, an unemployed Parisian, quietly cracked jokes about Fillon from his seat, calling him “the thief” even though he plans to vote for him. And Olivia Cattan, an author and activist for people with disabilities, asked the person sitting next to her “not to yawn or we’ll all fall asleep.”

According to a poll Tuesday, Le Pen is leading the race with a 26.5 percent approval rating, followed by Macron at 25.5 percent. Fillon was third at  18.5 percent and the far-left Socialist candidate Benoit Hamon had 13.5 percent.

The top two vote-getters in April’s first round will advance to the second and final round on May 7.

Fillon, who won his party’s primaries despite predictions he would finish third or fourth, cited the false forecasts in advising his listeners to distrust polls.

Macron, who has avoided populist statements about Islam in a positive campaign promoting national reconciliation, is the “kind of candidate that floats on the cloud thanks to a nice platform, but come elections, voters will be faced by the divides once more, and that’s when candidates like Macron crash,” Fillon said.

An independent candidate has not won a French presidential election in over four decades, since the 1974 victory by Valéry Giscard d’Estaing.

Countless French voters who are worried about radical Islam, Fillon also argued, would vote for Le Pen if made to choose between her and the reconciliatory Macron. On Feb. 4 in Lyon,  Macron riled the right and even some centrists when he said, “There is no French culture, there is culture in France, and it is diverse, different and made up of multiple cultures.”

Fillon disagreed at the CRIF meeting, saying “France is not multicultural, it is diverse but has one language: French.”

Despite Le Pen’s efforts to woo Jewish voters by promising that she will be their “shield” against Islam, most of them are distrustful of her National Front party. It  was founded by her father, Jean-Marie Le Pen, who has multiple convictions for Holocaust denial and incitement to racial hatred against Jews. His daughter kicked him out in 2015 for making anti-Semitic statements, but he remains honorary president of the party and has many supporters in its ranks.

Marine Le Pen has also said, if elected, that her effort to ban the religious garb of Muslims would include kippahs in some public spaces. The kippah prohibition would be necessary to preserve equality, she said.

By contrast, at the CRIF talk, Fillon said he would focus only on Islam and would not change any of the religious liberties now afforded to Jews and Christians in France.

“Banning citizens from wearing all religious symbols goes against my understanding of religious freedom,” he said. “Today there is one religion that poses an integration problem, and that is Islam.”