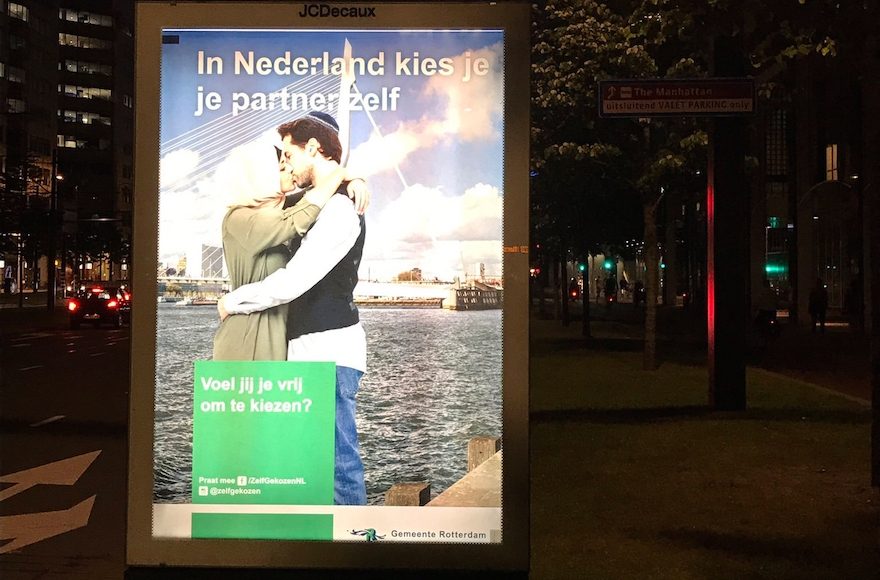 A poster encouraging free choice of romantic partners in Rotterdam, Netherlands, May 25, 2017. (Courtesy of Femme for Freedom)
Advertisement

AMSTERDAM (JTA) — In a country where sex toys are displayed in shop windows and television commercials often feature nudity, a picture of a clothed, heterosexual couple kissing may not seem like the stuff of scandal.

But precisely such an image — part of a poster campaign celebrating diversity in the Netherlands — has triggered acrimonious debate, charges of racism, acts of vandalism and even threats by those who found it offensive.

The reason: The women pictured in a series of posters were wearing Muslim headscarves – including one woman who was shown kissing a man wearing a kippah.

To some of the detractors, the poster campaign was a provocation designed to upset the sensibilities of Dutch Muslims and other non-white minorities. But to campaign supporters — including some prominent members of the Dutch Jewish community — it was an important statement about the need to counter radicalism and coercion in the Netherlands’ growing Muslim minority.

Initiated by a Muslim activist for women’s rights, Shirin Musa, the posters are part of a municipal initiative in support of women, mostly Muslim, who face abuse if they choose spouses their communities disapprove of. Bearing the slogan “In the Netherlands, you choose your own partner,” the posters were placed in bus stops and on signposts across Rotterdam. Supporters of the initiative also handed out fliers with the images on the streets.

The campaign features four couples locking lips against a background featuring the port city’s iconic Erasmus Bridge: the Jewish-Muslim couple; a Muslim woman kissing a blond man; two women, one in a South Asian dress, and a black man with a woman who appears to be of South Asian descent. (Leefbaar Rotterdam, the rightist faction that led the municipally sponsored campaign, did not immediately answer JTA’s query as to whether the people in the posters were real-life couples or actors posing as lovers.)

The campaign is in support of “women with an immigrant background from patriarchal communities,” Musa said in an interview on Dutch television last month. Such women, she said, are subjected to violence and coercion over their choice of romantic partners. 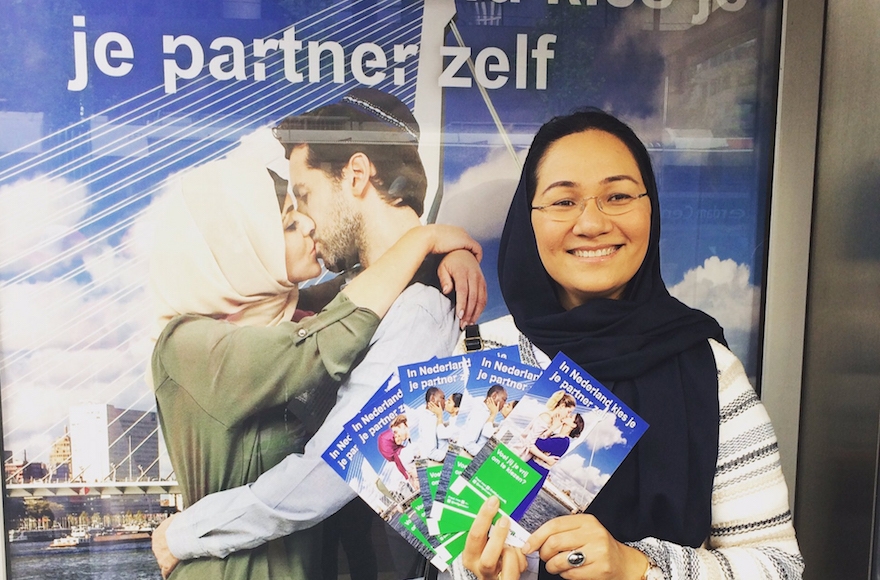 Shirin Musa handing out fliers in Rotterdam featuring images from the poster campaign on free choice of partners, May 25, 2017. (Courtesy of Femme for Freedom)

Citing a 2014 study by the Verwey Jonker Institue, a social policy research group, Dutch officials say there are between 600 and 1,900 victims of forced marriage in the Netherlands. The report also describes wives who are held captive or abandoned.

Virtually all of the major media in the Netherlands have reported on the controversy around the poster campaign. On the prime-time talk show “Pauw,” the head of the Dutch Labour Party, Lodweijk Asscher, praised the campaign as “beautiful.”

But the posters triggered a backlash among some Muslims, including within Asscher’s own party. One of Labour’s representatives on the Rotterdam City Council, Fatima Talbi, wrote in an op-ed that she was “furious” about the campaign, which she said treats Muslims as though they are “backward” by turning the matter of forced marriage into “an integration issue.”

Tunahan Kuzu, a lawmaker in the Dutch parliament for the radical pro-Islam, pro-immigration party Denk, which in the March elections won three seats in the parliament’s lower house, called the campaign “provocative, discriminating and patronizing.” Several of the posters were vandalized, hateful rhetoric was directed at their supporters on social media and activists distributing campaign fliers reported threats of violence. Police assigned officers to watch over some of the activists following several incidents.

One man told an activist from Musa’s Femme for Freedom organization: “I’m going to thump you on your f***ing head if you give me this flier,” Tanya Hoogwerf, a Rotterdam councilwoman, told the PowNed television channel last month.

Two men filmed themselves destroying a poster that was placed on a bus shelter.

“Choose your own freedom, they say,” one of the men said. “Rip it all the way out.”

Musa Movi, a well-known Muslim comedian, in a video called the campaign’s initiators “mosquitoes that you don’t see coming, but when they get you – it’s over.” He then slapped his own neck as one does when killing a mosquito.

The poster featuring the man wearing a kippah was the image that “drew the most attention and criticism” by Muslims, according to Ronny Naftaniel, the executive vice chairman of the Brussels-based CEJI group, a Jewish organization that promotes tolerance in Europe, and a former director of the CIDI Dutch Jewish watchdog on anti-Semitism.

On Maroc.nl, a news site and forum popular with many Dutch Muslims, a moderator called the campaign the work of  “racists and feminists who … provoke Muslims during Ramadan with posters of a Jew kissing a Muslim woman.”

But, Naftaniel added, Muslim detractors were more likely to focus on the depiction of Muslim women and less on the man wearing a kippah.

“The criticism by Muslims was that the campaign tries to enforce social norms on the Muslim minority,” Naftaniel said. “And I think we can debate this issue: Is the campaign saying that it’s good if people lose their identity, intermarry into one big mishmash?”

Although the campaign provoked no negative reactions in Jewish public circles, Naftaniel said, “many Dutch Jews would not like to see their child marry a Muslim, though they don’t feel the need to say it.”

Despite his doubts about how the campaign can be interpreted, Naftaniel ultimately supports its message promoting freedom in choosing romantic partners.

“You can choose someone from a different ethnicity to yours. But you don’t have to. And I think the campaign could have been clearer about this distinction,” he said.

To Esther Voet, the editor-in-chief of the Dutch Jewish Nieuw Israelietisch Weekblad weekly, the “intensity of opposition that this campaign generated is the best proof of how necessary it is.”

It showed that in the Netherlands today, “for many Muslims, seeing a member of their own community kissing a Jew is an image that crosses a line, and that creates resistance,” she told JTA. “And that sentiment is precisely at the heart of the reason that this campaign was started in the first place.”