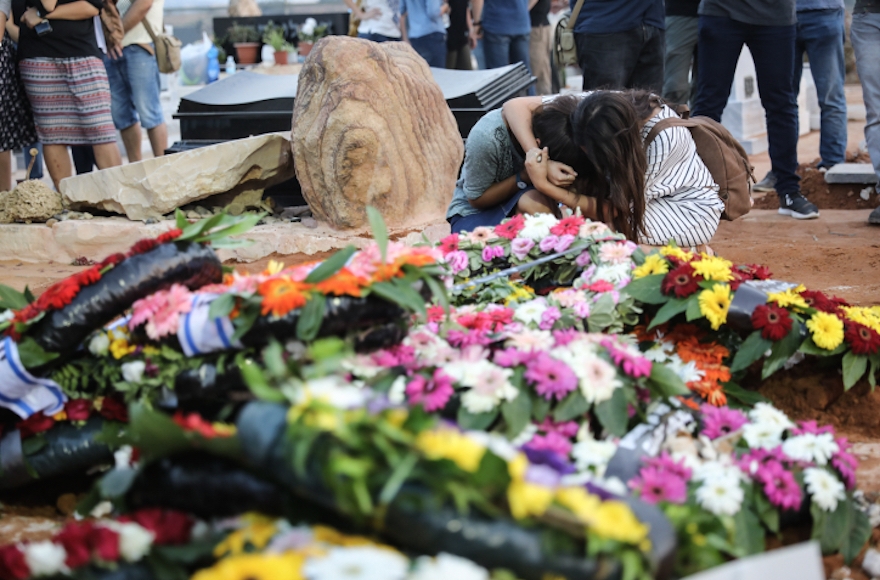 Friends and relatives mourning at the graves of Yosef Salomon, 70, his daughter Chaya, 46, and son Elad, 35, after their funeral, which was attended by thousands, at the Modiin Cemetery, July 23, 2017. (Yonatan Sindel/Flash90)
Advertisement

JERUSALEM (JTA) — Thousands attended the funeral of three members of a family killed in a Palestinian stabbing attack in the West Bank.

Yosef Salomon, 70, and his children Chaya, 46, and Elad, 36, were buried Sunday afternoon at the cemetery in the central Israel city of Modiin.

Tovah Salomon, 68, Yosef’s wife and mother to the two other victims, was allowed to leave the hospital for the funeral; she had been seriously injured in the attack. Several of the mourners carried large Israeli flags throughout the rite, according to reports. Some 10,000 mourners were expected to attend the funeral.

Omar al-Abed, 19, from the nearby Palestinian village of Kobar, entered the home of Yosef and Tovah Salomon in the Halamish settlement and began stabbing the family members, who had gathered to celebrate the birth of a baby to another of the senior Salomon’s sons.

Michal Solomon, the wife of Elad, who ran with the children to the safety of an upstairs room that she locked before calling security services, in a eulogy called him the “perfect husband” and her best friend.

“Now you are not here for me and it scares me,” she said. “In the last two days I have received so much strength from people I don’t know. You don’t know how much you have helped me.”

The rabbi of Halamish, Yonatan Glass, said in a statement read on his behalf: “Only someone with no remnant of humanity could raise their hand against Yossi and his family. Yossi that made everyone he came across happy. The Salomon family household was based on making other people happy.”

The mayor of the city of Elad, home to Elad Salomon and his family, vowed to double and triple the size of the city located on the seam between central Israel and the West Bank.