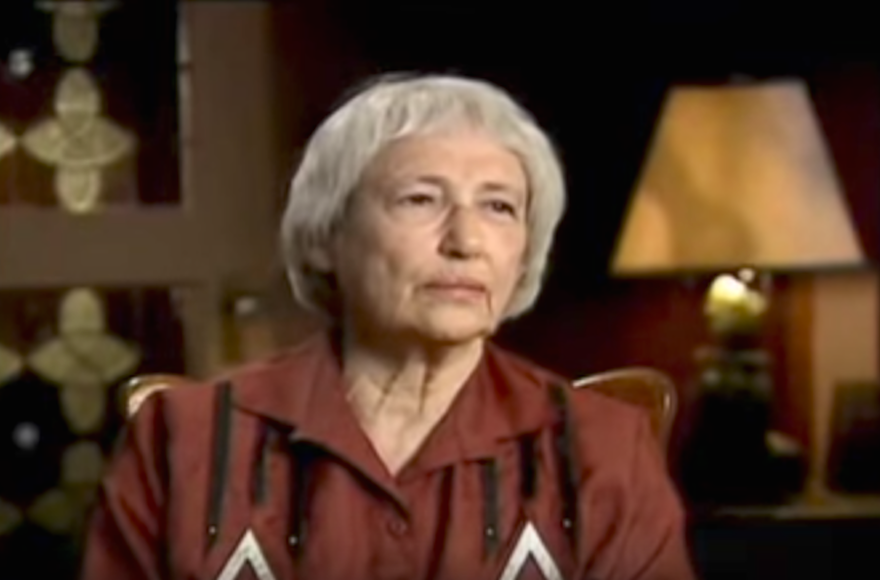 (JTA) — Margaret Bergmann Lambert, a high jumper who was barred from the 1936 Berlin Olympics because she was Jewish, died in New York at 103.

In June 1936, just a month before the Olympics, Lambert, then a German citizen known as Gretel (short for “Margarethe”) Bergmann, won a meet against some of the best German high jumpers with a leap of 5 feet, 3 inches — a height tying a German record and good enough to win the top spot on the Olympic team.

The Nazis had demanded that she compete in the trials in order to appease foreign powers who suspected that the party’s race theories and anti-Semitic policies would sully the Olympics.

But shortly after her record-setting performance at the meet in Stuttgart, at Adolf Hitler Stadium, she received a letter from Nazi officials informing her that she had not qualified.

“Looking back on your recent performances,” the letter said, “you could not possibly have expected to be chosen for the team.” Her accomplishment was removed from the record books.

JTA reported on July 16, 1936, that Bergmann had been dropped from the German Olympic team. The same article noted that Helene Mayer, a fencing star who was half-Jewish, would be allowed to compete but had been demoted to 14th place on the team’s roster. The article cited a report in Der Angriff, a newspaper set up by Propaganda Minister Joseph Goebbels, which claimed that Bergmann was dropped because Germany had no chance of winning the high-jump event, “owing to the excellence of the American and Japanese competitors.”

A Hungarian athlete would go on to win the event with a jump just below 5 feet, 3 inches.

“I had nightmares about the whole thing for months before,” Bergmann said, in a 2015 interview with Newsday, about her return to Germany. “How would people on the team treat me? Maybe they would break my leg to keep me from competing. If I won, could I stand up there and salute that man? What if I lost?”

Margarethe Minnie Bergmann was born to a secular Jewish family in 1914, in the small town of Laupheim, in southwest Germany, about 65 miles from the Swiss border. As a student athlete she excelled in the shot put, the discus and other events as well as the high jump.

With anti-Semitism on the rise in Germany, Bergmann left home at 19 and moved to England, where she won the British high-jump championship in 1935. But when the Nazis pressured her father to bring her home, she returned to Germany to seek a position on the Olympic team.

In 1937, Bergmann was able to obtain papers that allowed her to immigrate to the United States. She landed in New York City, where she worked as a masseuse and housemaid, and later as a physical therapist, according to the Times. In 1938, she married a fellow German refugee, Bruno Lambert, who was a sprinter. He died in 2013.

Lambert continued to compete in track and field events, but for only a few more years. She won the U.S. women’s high jump and shot put championships in 1937 and the high jump again in 1938. She was preparing to try out for the 1940 Olympic team when war broke out in Europe, after which she focused her attention on trying to get her parents out of Germany, which she was ultimately able to do.

Bergmann was inducted into the Jewish Sports Hall of Fame at the Wingate Institute in Israel in 1980. In Germany she was awarded the Honorary Plaque of the Field and Track Association and honorary membership in the Laupheim Gymnastics and Sport Club. Stadiums in Berlin and her home town were named for her.

In 1999 Bergmann broke her oath never to return to Germany, where she received the Georg von Opel Prize, which is given to persons who have distinguished themselves in sport and its principles, according to the Jewish Women’s Archive.

Dagmar Freitag, a member of Germany’s parliament. attended Bergmann’s 101st birthday party in 2015 at her home in Queens, New York.

In 2004, HBO aired a documentary about her called “Hitler’s Pawn.”

She is survived by two sons, Glenn and Gary, two grandchildren and a great-grandson.