Our president just asked us to be fair to white supremacists 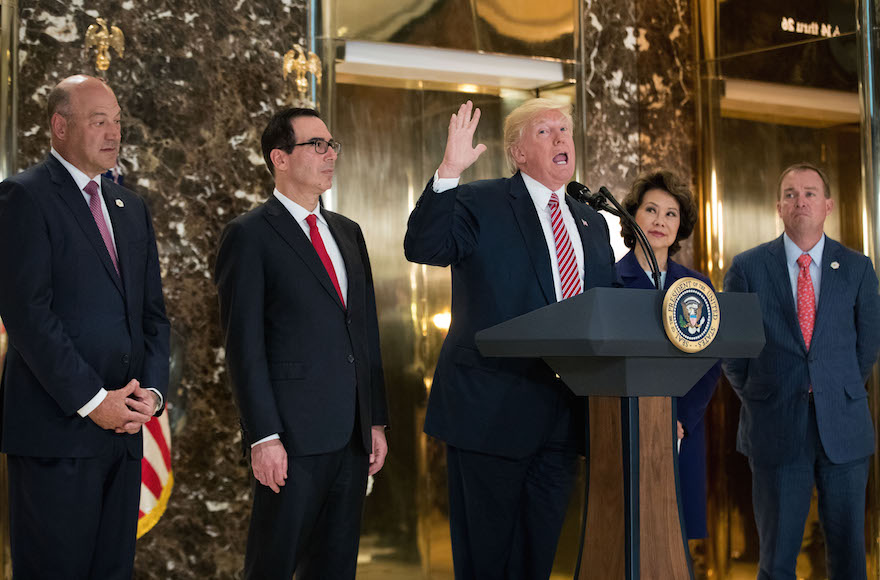 NEW YORK (JTA) — There was a moment in his “neo-Nazi, neo-Shmazi” news conference where you might have found yourself thinking, maybe President Trump is right.

On the narrow question of who was responsible for the violence in Charlottesville, a prosecutor might note that punches were thrown by white supremacists and left-wing activists, neo-Nazis and members of the Antifa resistance.

“I think there’s blame on both sides,” is how Trump put it in his news conference Tuesday in New York.

It’s the right answer if this is the question: “Who threw punches in Charlottesville?” But it is the wrong answer to every other question raised by the awful events of the past three days. Such as, “What is expected of an American president when hundreds of people representing a stew of racist and anti-Semitic ideologies gather in a public park in an American city?” And, “What do we expect of the leader of our government when young men in 2017 wave Nazi flags and chant ‘Jews will not replace us’ while one of their number kills a counterprotester using his car as a weapon?”

And one more: “When given the choice between a mob that defends segregation, slavery and the ideology of genocide, and a crowd that stands opposed to these things, which side do you choose?”

Trump stunned his critics not because he was waiting (uncharacteristically, one might add) for all the “facts” to make a statement, as he said at the news conference, but because he ignored the essential fact: Neo-Nazis, Klansman and other far-right ghouls had called for a rally, under the banner of “Unite the Right,” in an attempt to resurrect ideas that the United States had declared — on the battlefield, in the courtroom and in the court of public opinion — morally bankrupt and grotesquely un-American.

And the president of those United States declared that while such people were bad, they were perhaps no worse than those who came to oppose them. In fact, he was careful to point out, “You had many people in that group other than neo-Nazis and white nationalists. OK? And the press has treated them absolutely unfairly.” But if there were “very fine people” who showed up in Charlottesville to “quietly” protest the removal of a Confederate statue, as Trump put it, they knew exactly what they were getting into. You can’t show up at an orgy and say you’re there just for the snacks. As the satirical newspaper The Onion put it in a headline that barely seemed satirical, “Trump Blasts Critics Who Judge Neo-Nazi Groups By Most Extreme Members.”

Trump may occasionally and reluctantly disavow them, but figures on the lunatic fringe appreciated the bone that they had been thrown.

“Really proud of him,” the white supremacist Richard Spencer said in a tweet. “He bucked the narrative of Alt-Right violence, and made a statement that is fair and down to earth.”

“Donald Trump: He Was Fair to White Supremacists” is quite the epitaph.

On Saturday morning, after the torchlight vigil, after the speech by David Duke and the anti-Semitic chants and the killing of a 32-year-old woman, no one outside of the “alt-right” was looking for fairness. They were seeking moral clarity — and they didn’t get it from the White House.

Some very fine people, including some Jews, are not convinced. They think Trump got it about right in noting that “many sides” are responsible for what happened in Charlottesville. They think it was important to point out that there were “vicious, hate-filled extremists,” as one Jewish leader put it, on both sides — that is, the neo-Nazi side and the protesters’ side, the Klan’s side and the anti-fascist side.

It is as if the lesson of Jewish history is moderation in the face of hatred, restraint when confronted by those who would kill us.

In his 2003 book “Nazis in Newark,” the historian Warren Grover recalled how a loose group calling themselves the Minutemen organized in order to crush the pro-Hitler activity proliferating in their backyard.

“Throughout the 1930s, the Minutemen consistently and effectively opposed Nazi activities in Newark and Northern New Jersey,” Grover wrote. “The fighting force included criminals and boxers who used fists, clubs, and baseball bats to counter the Nazi threat. Often just a rumor that the Minutemen had been sighted was enough to deter Newark’s Nazis from holding events.”

Plenty of Jews who remember the Minutemen consider them heroes — and even revere the memory of the gangster Abner “Longy” Zwillman, who aided them. Maybe we live in more rarefied times. Maybe today we’d call the anti-Nazi gangs “thugs” and “terrorists.” Maybe there’s a difference between standing up to neo-Nazis and actual Nazis. And maybe, to our credit, we understand that nonviolent resistance is the most principled and effective response to hatred and intolerance.

But if the Minutemen lacked a certain gentility, two things they didn’t lack: moral clarity and the courage of their convictions.

Trump was asked Tuesday whether white supremacists and their counterprotesters belong “on the same moral plane.”

“I’m not putting anybody on a moral plane,” our president said.