The left has an Israel problem. Does that mean colleges have an anti-Semitism problem? 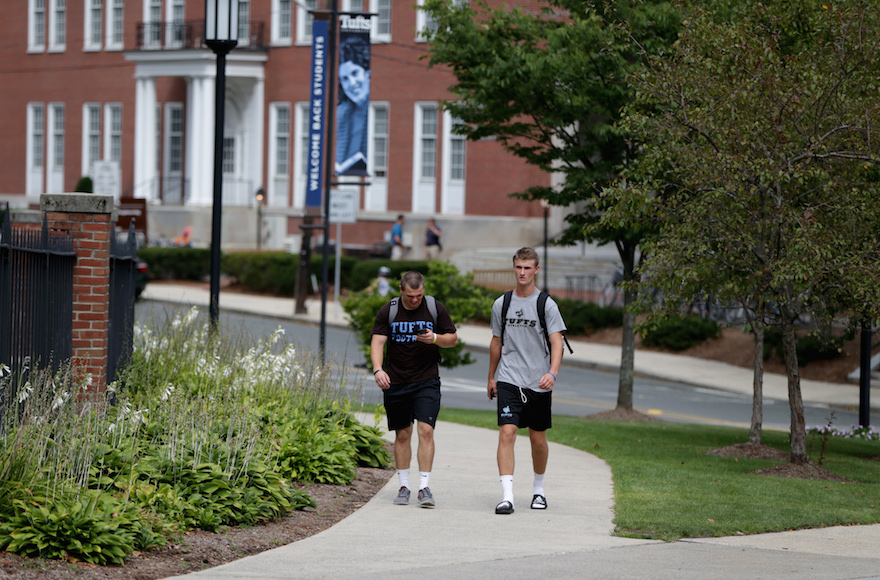 (JTA) — Last week JTA reported a story about an alternative students’ guide published by student activists at Tufts University that labels Israel a white supremacist state. The so-called “disorientation guide” also reduced the university’s Hillel to a “Zionist” organization that offers nothing of value to the private campus’s diversity or culture.

The authors of the guide might deny that, of course. But what else do you make of a guide to campus diversity that does not discuss Jewish social, cultural or religious life? And one that takes at face value complaints from an African-American organization that a Hillel-sponsored event about gun control was meant to “exploit” black people “for their own pro-Israel agenda”?

The conflation of “Jewish” and “Zionist” (and “racist” and “colonialist,” while we’re at it) is hardly a new thing on the left, although the guide was a pretty stark example of an entire minority group on campus being erased or devalued with a few taps of a keyboard by those who purport to stand up for religious and ethnic minorities. That’s why we considered it an important story, and that’s why we published it.

Still, a few things bothered me about the story — and the issue itself.

First, just because an activist group says dumb and misguided things about Jews and Israel, that doesn’t mean the campus in question is “hostile” or “uncomfortable” for Jews. Too often groups, mostly on the outside, seize on incidents like these (and articles like ours) to tar the school or administration as unfriendly or anti-Semitic. Last year, the Algemeiner published a list of “The 40 Worst Colleges for Jewish Students,” which was really just a list of anti-Zionist and anti-Semitic incidents at various campuses. Missing was any sense of how Jewish students actually experience Jewish life at these colleges.

Indeed, Tufts, no. 23 on the Algemeiner list, has a student body that is 25 percent Jewish. Our article noted that it has a range of Jewish and pro-Israel clubs, including Hillel, the Tufts American Israel Alliance, Tufts Friends of Israel, J Street U, Jewish Voice for Peace, TAMID and IAC Mishelanu. Hillel offers Reform and Conservative Shabbat services, and there’s a Chabad. The Forward, which took into account many more factors than pro-Palestinian activism when assembling its own list of top colleges, named Tufts the 13th best school for Jewish students.

That’s not to say that “Israel Apartheid Week” demonstrations, BDS resolutions and screeds like the “disorientation guide” aren’t upsetting. Or that a strong reaction isn’t called for when anti-Zionists slander Israel, Jewish groups and individual Jews.

But colleges are also places where students are supposed to encounter upsetting or uncomfortable ideas. You can’t ridicule a leftist campus like UC Berkeley when it offers counseling to students offended by a talk by a conservative like Ben Shapiro, and then demand that a university “protect” Jewish kids from a pro-Palestinian message. (I mean, you can — but just watch out whom you are calling a “snowflake.”)

On the other hand, the Tufts “disorientation guide” itself also failed the test of university-level inquiry.

There are already enough reasons to be critical of Israel, if you are so inclined, without inventing slanders like “white supremacy.” Liberal Zionists, for example, see Israel’s control of millions of non-citizen Palestinians not only as a hardship for Palestinians but a threat to Israel’s own Jewish and democratic character. Their critique — shared with a weakened but persistent left in Israel itself — is one side of a debate in which reasonable people can take part. You can disagree, but you understand that the critics are serious in their concerns and can summon a strong factual argument in their defense.

But by accusing Israel of “white supremacy,” the anti-Zionists sound like that old tongue-in-cheek definition of anti-Semitism: “disliking Jews more than is necessary.” They yank the debate into a territory where it doesn’t belong. Nothing in Zionism assumes Jews are white, and indeed Israel’s Jewish population — four-fifths of a country that includes a substantial minority of Arab citizens — includes a range of ethnic groups hailing from Europe, North Africa, the Caucasus, the Middle East, Ethiopia and India.

And the “white supremacy” gambit is shoddy scholarship and a tactical disaster. It casts the conflict as a simple case of segregation and civil rights, and not as a clash of national identities. So you can be proud of yourself as a good leftist if, in the name of intersectionality, you rally all kinds of dispossessed groups and discriminated-against people behind your anti-Israel cause, but you do nothing to bring Israelis and Palestinians any closer to peace.

Because the Palestinians aren’t looking for equality — they are looking to fulfill their nationalist aspirations, just like the Jews. Palestinians — I am talking about those who live in the West Bank and Gaza, not Israel’s Arab citizens — don’t want to vote or serve in the Knesset. They want a country — some, a country coterminous with Israel; some separate and side-by-side. But if you delegitimize Israel — and that can be the only motivation behind calling it “white supremacist” — it can mean that you are wishing for only one outcome: the end of the idea of a Jewish homeland, and the elimination of the political sovereignty for one national group, the Jews, in favor of another, the Palestinians.

Then you would have to explain why Palestinian nationalism is any less “racist” or supremacist than the Jews’.

Anti-Zionists, selective in their nationalisms, have found an easy and fashionable metaphor into which to plug their anger at Israel and solidarity with the Palestinians. As a former colleague put it on Facebook: “They’re not really interested in doing good; they’re interested in feeling good. And forcing complicated realities into simplistic moral frameworks helps them feel good about themselves and their ‘activism.'”

What’s more, by hating Israel more than they have to, they have managed to discredit the left in ways that are spreading into the center, and handing a huge victory to a pro-Israel right that is only too happy to paint its adversaries as unserious, uninformed and anti-Semitic.