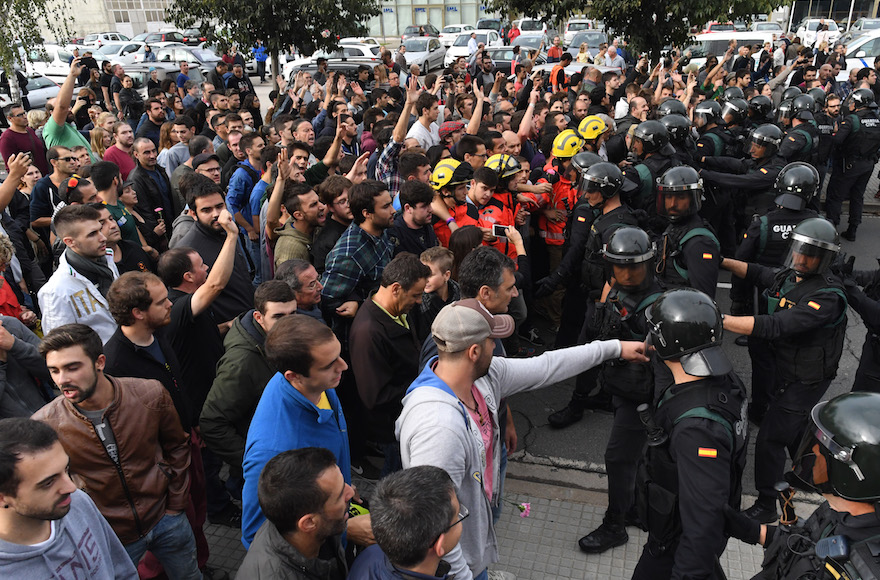 (JTA) — Violence between police and pro-independence protesters in Barcelona will not disrupt holiday services there, a leader of the Jewish community said.

Victor Sorenssen, a leader of the Jewish community of the capital of Catalonia, an autonomous region with its own language and many residents who seek independence from Spain, said the city’s Jewish congregations will not “be affected by something that is essentially a political discussion.”

Sorenssen said this following riots Sunday during the poll in which more than 300 people were injured in clashes with police, who were under orders to prevent a referendum of independence organized by the Catalonian government even though a top court in Spain ruled it was illegal.

Community events, including Sukkot celebrations and Simchat Torah, are at present to go on as scheduled despite the tension around the referendum, Sorenssen added. He said he was not aware of injury to any of the community’s members in the clashes, he added.

“The Jewish community is a religious and a cultural institution and we respect all the different approaches and points of view of our members, that range from pro-independence to being against,” he explained.

Barcelona has approximately 15,000 Jews out of 45,000 living in Spain, according to the European Jewish Congress.