Is Auschwitz ready for a peace center? A Vermont woman thinks so.

(JTA) — A Vermont educator whose grandparents perished in Auschwitz is working to create a humanitarian institute next to the infamous concentration camp, and some Jewish observers aren’t happy.

Nina Meyerhof, 75, sees what she is calling the “City of Hope” as a counterbalance to the grim experience of visiting the Nazi concentration camp, which includes one of the most visited museums in Europe.

“You can imagine that walking through that horror show, where you’re going through gas chambers, etc., and then coming to a place that’s really calm and beautiful and a little cafe and being able to sit and think about your experience,” Meyerhof said. “After you’ve had that experience, you don’t know what to do with it. Well, what we’re saying is you can transform that experience and carry it forward and make a difference in life.”

Meyerhof hopes to establish the City of Hope in 11 former Nazi barracks that were used by the Polish military after World War II. A newly formed nonprofit, the One Humanity Institute, would provide space there for education, research, conferences, NGO offices, a museum, a villa, a garden and a restaurant.

According to the institute’s website, the Auschwitz center will “aim to translate, in formal and non-formal environments, the values of understanding, freedom, equal dignity, justice, equity, harmony, compassion and forgiveness into knowledge, skills, actions, and projects for communities across the world.”

Asked if she thought Holocaust scholars and Jewish organizations might object to her plans, Meyerhof replied, “In no way do we want to take away from the experience of what people learn and viscerally experience when they go there.”

“I can appreciate her intentions, but this is really misconceived,” Zuroff told JTA. “You don’t want to soften the blow [of the experience of visiting the concentration camp]. People should leave Auschwitz very disturbed. Auschwitz stands alone, and that’s exactly as it should be.” 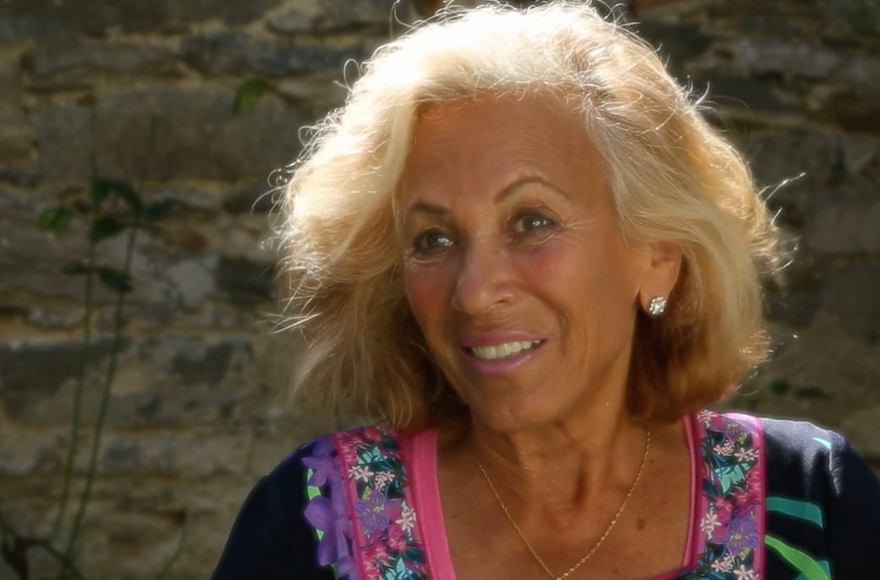 Nina Meyerhof wants to counterbalance the grim experience of visiting Auschwitz. (Screenshot from One Humanity Institute)

Also questioning the project is Michael Berenbaum, who served as the project director during the creation of the U.S. Holocaust Memorial Museum in Washington, D.C., and played a key role in the establishment of Steven Spielberg’s oral history project on the Shoah. Now a consultant on the creation of museums and memorials around the world, Berenbaum said the City of Hope is not the best use of the former SS barracks.

“Auschwitz is a paradox. Auschwitz is the single most sacred anti-sacred site in the world. It is so anti-sacred that it has become sacred,” Berenbaum said.  I have a problem using it for anything other than telling the story of the crime [committed at the concentration camp].

“One always has to ask in such a situation, ‘Is this the most worthy use of so an important a site?’ The staff who were part of this scheme of massive murder — where they were housed probably should be used as part of the site to tell the story of the men and the women who lived in these barracks.’”

Jewish scholars and activists have fought in the past against what they saw as misuses of Auschwitz and its environs, especially attempts to universalize or “de-Judaize” a site where, according to the U.S. Holocaust Memorial Museum, 960,000 Jews were killed, along with approximately 125,000 non-Jewish Poles, Roma and members of other nationalities.

In 1984, a Carmelite convent was established on the grounds of Auschwitz; it was closed by Pope John Paul in 1993 after years of protests. Activists have also asked for the removal of a Catholic church built in the 1980s at the Auschwitz II Birkenau extermination camp.

Zuroff said locating the One Humanity Institute within the Nazi barracks amounted to “replacing reality with fantasy” and dismissed Meyerhof’s plans to establish a research center dedicated to world peace.

“That research is already being done all over the world,” he said. 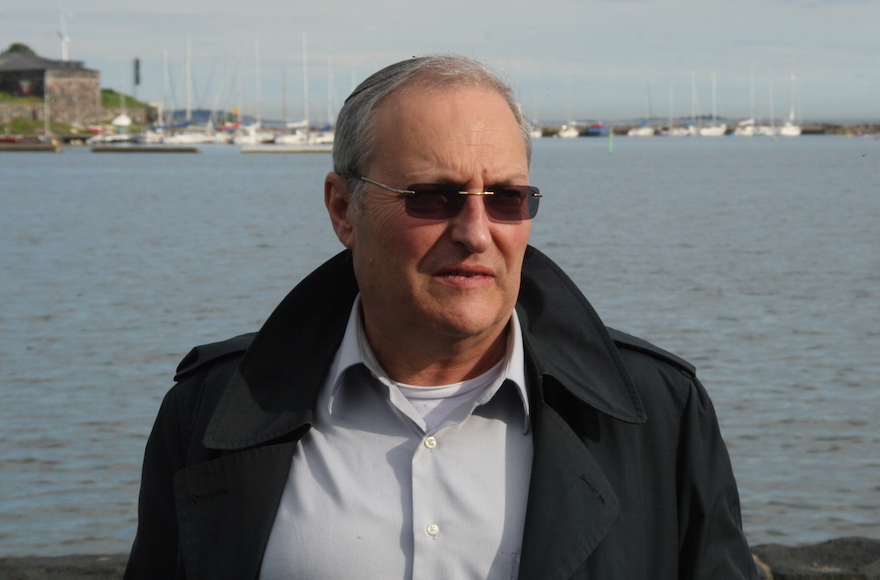 Efraim Zuroff, shown in 2012, thinks the idea for a new center at Auschwitz is “absolutely terrible.” (Wikimedia Commons)

The 11 buildings planned for the humanitarian institute are two- and three-story structures adjacent to the entrance of the concentration camp. Meyerhof said the Polish military still has a claim to the buildings.

Meyerhof said she’s been to war zones around the globe, but did not visit Auschwitz until 2014. Her grandparents and nearly 20 other relatives were killed there.

“I had no intention of getting involved there. None whatsoever,” said Meyerhof, who ran school programs and a summer camp in Vermont, and founded Children of the Earth, an organization that encourages spirituality and activism.

Since then she said she’s made 10 trips to Oswiecim, the town in Poland on whose outskirts the Nazi death camp is located.

Meyerhof, a descendant of German Jews, said members of her family were deported from Berlin to Auschwitz. Her mother, who told Meyerhof that her grandmother was gassed on the day Nina was born, once remarked that “every person who ever gave her a piece of candy was taken away.”

Meyerhof lived in Israel for a year and said she identifies with Jewish ethnicity more than the Jewish religion.

“I don’t have a deep identification as a suffering Jew,” she added.

Meyerhof and her partner, the Slovenian theologist Domen Kocevar, have met with both the mayor of Oswiecim and the governor of its province. According to Meyerhof and Kocevar, the governor has discussed the City of Hope project with Polish Prime Minister Beata Szydlo, an Oswiecim native.

In an email sent Sunday, Meyerhof wrote that she was hoping to meet directly with Poland’s president or prime minister this week before returning to Vermont.

“We’re doing a lot of relationship building,” Meyerhof said of the several trips she and Kocevar have made to Oswiecim. “Part of our design is that financially the town would benefit from our work, that there would be a percentage [of proceeds] that would go to them, there’d be jobs, there’d be taxes.”

The project’s website, which does not contain a single reference to Jews, features videos of diplomats and celebrities expressing their support for the City of Hope, including the violinist Scarlet Rivera and the primatologist Jane Goodall.

“There is no more fitting place for creating a center … where people can be inspired with a vision of a world where we live together with respect for each other,” Goodall said in a video urging support for the One Humanity Institute.

Meyerhof is partnering with Robert Smith, a former Wall Street trader who now runs a network of wealthy families and institutional investors committed to social change. Smith and Meyerhof met in February at the World Summit of Nobel Peace Laureates in Bogota, Colombia.

“She is one of the most tenacious individuals I’ve ever met,” Smith said. “I could see that there was a chance that she could pull this off.”

Smith said he intends to raise $3 million as seed money for the City of Hope from philanthropists affiliated with Investment Community Visibility, his company. The total cost of building the City of Hope is pegged at $250 million.

“My goal with this is that there be light that comes into this place of darkness, and then that light is carried out to other people,” said Smith, who raises funds for the Permanent Secretariat of the World Summit of Nobel Peace Laureates, a nongovernmental organization based in Rome.

Meyerhof said the proposal to build her City of Hope at Auschwitz could be approved next year and that programs could begin in 2019.

After visiting the One Humanity Institute’s newly launched website, Zuroff said the money needed to build the proposed City of Hope would be better spent on the physical preservation of the existing portion of the former concentration camp, now maintained as a historic site, so that it doesn’t physically disintegrate.

(Manhattan-based radio journalist Jon Kalish [@kalishjon] has reported for NPR since 1980. His newspaper articles, radio docs, podcasts and NPR stories are at kalish.nyc.)