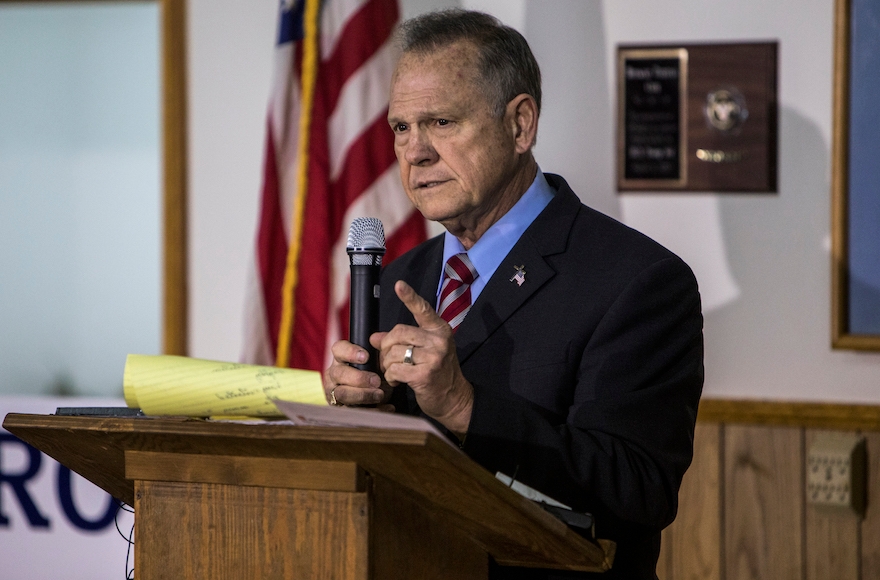 Moore, a Republican, on a radio program Monday was asked about The Ordinary People Society, an organization that seeks to register Alabama felons to vote under a law enacted in May that restores voting rights to those convicted of an array of felonies.

Bryan Fischer, the host of  the American Family Radio program who is friendly with Moore, asked the Senate candidate what he thought of George Soros, “who seems to think that if you register felons to vote, they will vote for the Democrat.” Soros is not funding the initiative; Fischer had apparently read a Breitbart News story posted online Sunday that sought to link The Ordinary People Society to a number of Soros-funded groups.

Moore, whose campaign has been dogged by accusations that he committed sexual assault against two teenagers and wooed other girls when he was in 30s, rejected the notion that felons would only vote for Democrats, but agreed that “Soros was trying to alter the voting populace” in Alabama.

“He is pushing an agenda and his agenda is sexual in nature, his agenda is liberal, and not what Americans need,” said Moore, not explaining what it is about Soros’ agenda that is “sexual.” He added, “It’s not our American culture. Soros comes from another world that I don’t identify with.”

Soros, a Hungarian survivor of the Holocoast, is an American citizen who moved to New York in 1956.

“No matter how much money he’s got, he’s still going to the same place that people who don’t recognize God and morality and accept his salvation are going,” Moore said. “And that’s not a good place.”

Soros, who has donated billions of dollars over the years to liberal and free-market causes, is widely despised by the ultranationalist right in the United States and abroad. Critics have at times used anti-Semitic tropes in attacking him.

Moore is running in a special election Dec. 12 against Doug Jones, a former prosecutor. One poll had Moore running ahead by 6 percentage points. Seven women have accused Moore of sexual impropriety.

He is backed not only by Trump, who had supported Moore’s opponent in the primaries, but by Steve Bannon, the Breitbart CEO and a leader of the far right.

Moore was twice elected chief justice of Alabama and twice removed: for refusing to remove a Ten Commandments monument from a courthouse and for trying to force judges in the state to enforce a ban on same-sex marriage after the Supreme Court had ruled such bans unconstitutional. He has said that Muslims should not serve in elected office and embraced debunked theories that former President Barack Obama was not born in the United States.