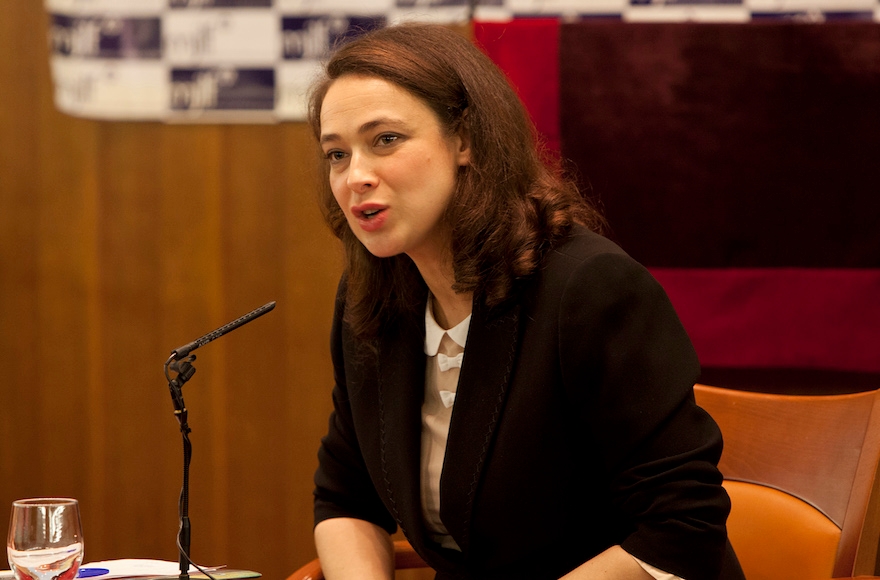 PARIS (JTA) — When Delphine Horvilleur, France’s best-known female rabbi, began appearing regularly in the media, her friends and relatives feared it would expose her to threats or attacks by anti-Semites.

Several years later it appears they were only partially wrong. Horvilleur’s media profile does invite hate speech and abuse online – but mostly from other Jews.

Following a reference to Jerusalem during a television interview last month, Horvilleur, 43, has again become the punching bag of the local branch of the Jewish Defense League and a vocal minority of ultra-conservative Jews. She says they are feeling emboldened in a community that is shifting rightward and curling inward amid lingering security fears and feelings of abandonment by authorities.

Stopping short of threatening to harm her physically, several dozen individuals have written a series of hateful statements against Horvielleur on far-right sites, Facebook and other social media following a Dec. 25 interview about Jerusalem for the France Inter broadcaster.

In the interview, she said that Jerusalem should not be used a political pawn by any party although it is Israel’s capital. She also said the city may become a Palestinian capital as well pending negotiations.

That rather mild disagreement with those who think Jerusalem is unequivocally and indivisibly a Jewish capital led the French Jewish Defense League, or LDJ, to accuse her of “stabbing Israel in the back.”

On its official Twitter account on Dec. 27, the LDJ wrote: “The scum Delphine Horvilleur proudly displays her Kapo credentials. Unfortunately, Jews didn’t have a choice during the Holocaust. But this liberal, left-wing excrement is a disgrace to our community.  DelphineHorvilleur — shameful Jewess!”

Kapos were Jews who worked for the Nazis as police officers inside ghettos and camps.

A far-right activist called Yosh Nakache sent Horvilleur a threatening text message warning that unnamed people would “come and explain to you loud and clear to stop speaking for the real Jewish people instead of your made up liberal one,” adding “The more you speak out, the more escalated the reaction will be.”

Reviled by some of her detractors for being a woman rabbi — one of the recent posts called on her to “return to the kitchen” — and by others for being a left-leaning Jew, this has been the most intense episode of incitement against Horvilleur, already a longtime favorite target for a handful of French Jewish provocateurs.

Horvilleur, an author of several books on theology, is the editor of a Jewish magazine and a married mother of three who lives in the heart of this capital city.

She said she has not filed a police complaint, but is considering how to proceed.

“I’m not going to assume a victim role here, so, yes, I feel safe and won’t be intimidated,” Horvilleur said.

The incitement against Horvilleur isn’t an uncommon reaction in a community where many feel on edge. A wave of anti-Semitic and Islamist attacks has caused thousands of French Jews to leave and is exposing those who remain to the worst security threats experienced by their community since the Holocaust.

Jews with extreme views on the right as well as the left regularly come under vociferous attacks by coreligionists for their perceived betrayal. This happens regularly to Eric Zemmour, a Jewish historian cherished by the anti-Semitic far right and some on the far left for his defense of French citizens who collaborated with the Nazis.

Or Rony Brauman, a former president of Doctors Without Borders and a pro-Palestinian activist who in 2016 said, when commenting about the stabbing of an observant Jew in Marseille, that wearing a kippah is “after all” also “a sign of a kind of allegiance to the policies of the State of Israel.”

But the attack on Horvilleur was different because, despite being a Reform rabbi in a community that is predominantly Orthodox and increasingly conservative, she is a mainstream leader of French Jewry, with strong pro-Israel credentials.

Horvilleur was invited last year to officiate alongside the Orthodox chief rabbi, Haim Korsia, at the funeral of Simone Weil, a Holocaust survivor who became health minister and one of France’s most influential politicians. Though it was not Korsia’s choice – his office attempted to downplay Horvilleur’s role at the funeral – the ceremony was nonetheless an interdenominational first in France.

The statements she made during the France Inter interview were no exception for Horvilleur, an eloquent speaker whose observations and wry sense of humor have helped make her MJLF Beaugrenelle congregation one of the best attended in Paris, with hundreds of families filling the synagogue to capacity on holidays.

“Jerusalem is being instrumentalized on all sides today,” Horvilleur said in the interview when asked about President Donald Trump’s Dec. 6 declaration that the United States recognizes the city as Israel’s capital. “Trump declared something which is an administrative reality. For Israelis, Jerusalem is today the incontestable capital of their country, but this lacks a certain broader vision.”

For some, she added, “it became almost a theological assertion, as though Donald Trump suddenly became a pope or a great rabbi. In others it triggers the desire to contest Israel’s legitimacy to exist under any circumstances.”

Asked whether Jerusalem could also become the capital of a Palestinian state, Horvilleur gave what she acknowledged in an interview to JTA was a “cautious” answer.

“It could, yes, there would need to be reflection on a solution that takes into account the attachment of everyone to the city — which doesn’t change the fact that today, Jerusalem is the capital of Israel,” she told the France Inter interviewer.

Following the incitement against Horvilleur, the CRIF umbrella of French Jewish communities published a statement stating that it condemns the “hateful remarks” against Horvilleur, adding that those who made them should be “prosecuted and convicted.” But the statement did not indicate that the hateful messages were by other Jews.

The Liberal Union of Jews in France, or ULIF, denounced the incitement in a statement that noted the hate speech came “from within the community” and that the Jewish tradition is “unequivocal” in its disapproval of such rhetoric.

But the Consistoire, the organization that represents most of France’s Orthodox synagogues, has not spoken out on the issue.

“It seems that this fringe minority suddenly is succeeding in getting away with its actions as the still majority stays mum,” Horvilleur said.

That may be a result of lessons learned from the last time the Consistoire waded into an acrimonious internal debate between ultra-conservatives and an outspoken female spiritual leader to many French Jews.

In June, a rabbi from Marseille harshly criticized Liliane Vana, a philologist and expert on Jewish law, for her role in organizing a seminar at a local Jewish community center that featured women reading the Torah – an action that some Orthodox Jews believe is sacrilegious.

As the Consistoire gingerly attempted to walk back the harsh verbal attack, the event escalated into a scandal. It prompted two small demonstrations by young Orthodox men and a slew of insults and threats by other French Jews, in Marseille and beyond, all critical of Vana.

That “rather banal statements trigger such an outpouring of hate is a sign of how intolerant our Jewish community has become to respectful disagreement, which is the essence of Jewish democratic values and thought,” Horvilleur told JTA. “French Jewry is ill, and only it can cure itself.”