In this West African country, a Jewish community is forming 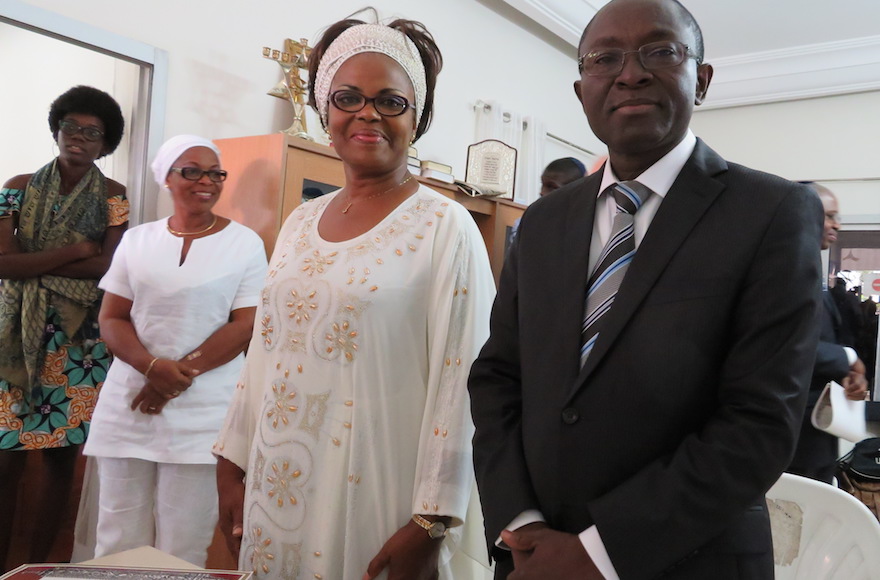 A couple marry according to Jewish tradition, in Abidjan, Dec. 9, 2017. (Bonita Sussman)
Advertisement

(JTA) — Avraham Yago, a married father of five who works as a linguistics professor at the University of Abidjan in the West African nation of Cote d’Ivoire, has visited Israel four times to learn about Judaism and practice his Hebrew.

Yago, 64, grew up without any religious affiliation. As a teenager, however, he embarked on a religious journey that led him, by way of Christianity as well as studies at the Kabbalah Center in Abidjan, to Judaism.

“For me, the Torah is the truth,” he told JTA from Abidjan, the country’s largest city.

Last month, after over 20 years of studying Judaism, Yago converted to Judaism along with 47 others, most of whom are members of the community he leads.

Gathering in Jacqueville, a coastal town in the country known in English as the Ivory Coast, the community members answered questions in front of a rabbinical court, or beit din, whose members flew in from Israel and the United States. For the immersion required of converts, they used a lagoon that served as a mikvah, or ritual bath. Male converts underwent a ritual drawing of blood since they were already circumcised.

The conversions were facilitated by Kulanu, a New York-based group that supports communities around the world seeking to learn about Judaism. Kulanu, which has been in touch with the community since 2012, had brought a Torah scroll, prayer books and other ritual items there on an earlier visit in 2014.

After the conversions, rabbis performed Jewish weddings for six couples in what Kulanu believes is a first in the country.

The converts belong to two communities in Abidjan, Sussman said. The larger one, led by Yago, has 42 members, consisting of five families as well as singles. Another six people identify as a separate group.

Like most members of his community, Yago believes he has Jewish roots. 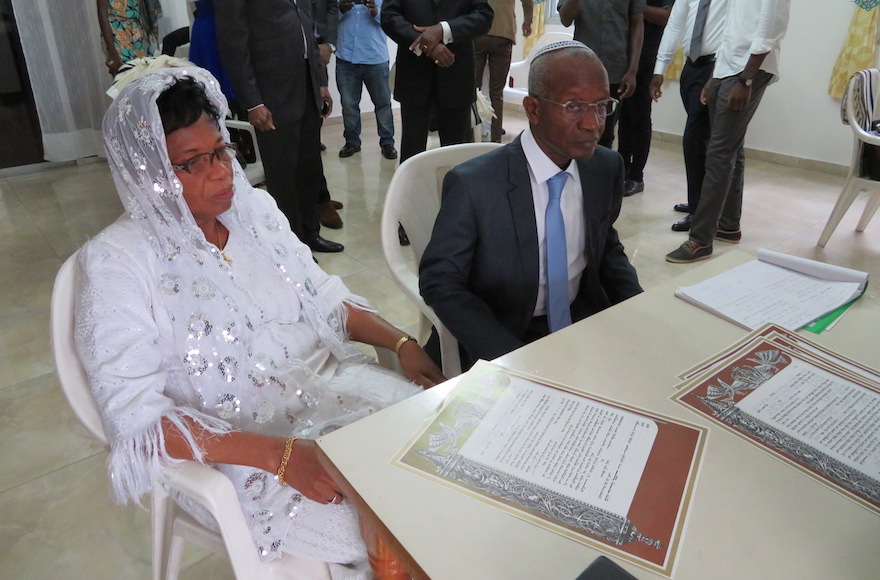 Avraham Yago and his wife with their new Jewish marriage certificates in Abidjan, Dec. 9, 2017. (Bonita Sussman)

That’s not unique in the communities that Kulanu works with. Last year, the group brought rabbis to Nicaragua to convert 114 people, and in 2016 it helped 121 people become Jewish in Madagascar. Both communities also believe they have Jewish heritage, with the Madagascar community believing they are members of a lost tribe.

The Cote d’Ivoire community is relatively affluent, allowing them to buy Jewish ritual objects and books, said Nathan Devir, an assistant professor at the University of Utah who researches emerging Jewish communities.

“They are a very privileged kind of community, I think much more so than any other African communities could ever dream of being,” said Devir, who visited the Cote d’Ivoire community in 2015.

The community counts among its members doctors, dentists, university professors and diplomats.

Members follow Sephardic Orthodox customs and eat a pescatarian diet since they do not have access to kosher meat, according to Sussman.

“They dress very modestly. They’re very into laws of niddah and mikvah,” she said, referring to ritual laws surrounding menstruation and sex. “On Shabbat they have a full day of prayers.”

Shabbat services are held in Yago’s home, but he said the community hopes to construct a synagogue and mikvah. 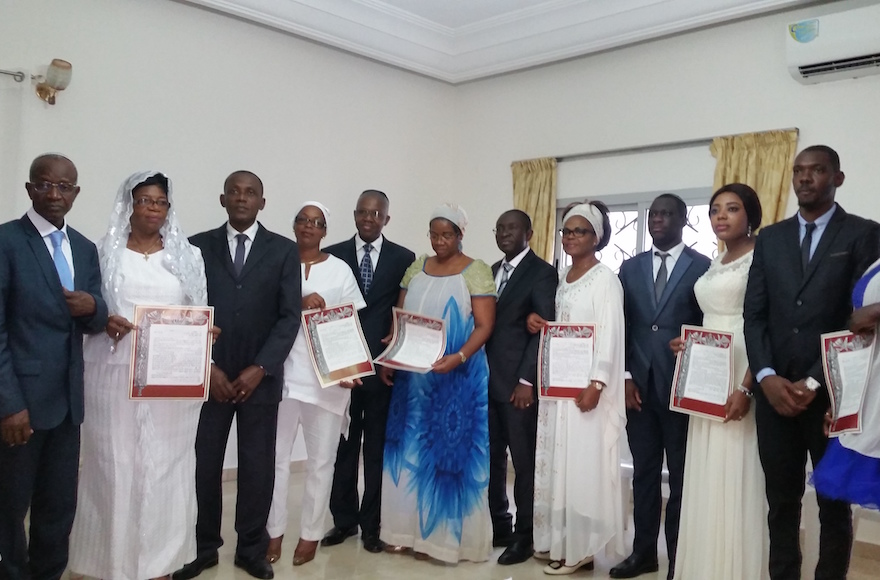 Couples who married in Abidjan after having undergone conversions to Judaism, Dec. 10, 2017. (Bonita Sussman)

The community’s beliefs are centered around the idea of a personal relationship with God, said Marla Brettschneider, a professor of political science and women’s studies at the University of New Hampshire who joined Kulanu on the trip last month.

“[T]hey imagine their activities, it’s a work they need and want to do to bring themselves closer to God, and [they believe] that the Jewish framework is the best or primary framework for them to be pursuing that relationship with God,” said Brettschneider, who has done research on Jewish groups in Africa.

Conversions to Judaism in the developing world aren’t without controversy.

Devir said that while the Cote d’Ivoire community is likely to be accepted as Jews by Jews in the United States, including the non-Orthodox denominations and the Modern Orthodox, they would face more difficulties among haredi Orthodox Jews and in Israel.

Community members do not want to move to Israel, Yago said. Still, recognition in Israel is necessary if members want to receive visas to study at yeshivas there. Members of Uganda’s Jewish community, who converted under the auspices of the Conservative movement, have found it hard to obtain certain visas and stipends that Jews can apply for in order to study and live in the Jewish state, Haaretz reported in October.

Suspicions about the validity of conversions such as the ones done in Cote d’Ivoire stem from various concerns, Devir said. Among the concerns: the rabbis are flown in to perform the conversions and have not met with the community beforehand, and that following the conversions the communities may not have adequate funds or infrastructure to sustain Jewish life. Some skeptics also worry that converts still subscribe to Christian beliefs, Devir said.

Sussman said that the American Jewish community is used to seeing people who are born Jewish lose interest in the faith, not the other way around.

“In South America and in Africa, we find groups yearning to run and break through the doors to come in, and no one’s letting them in,” she said. “This is a huge problem. It’s an unfamiliar challenge to the worldwide Jewish community.” 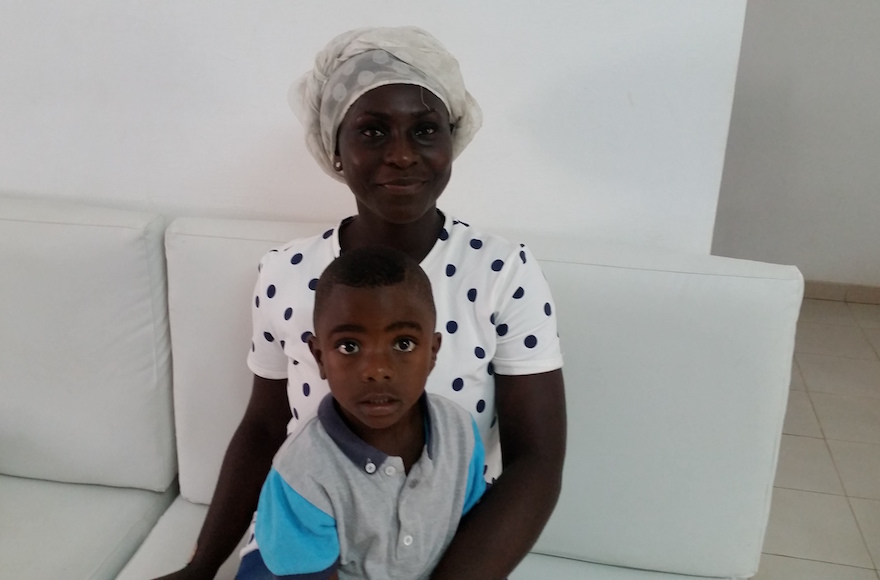 This mother and her young son in Jacqueville are part of a group of people in Cote d’Ivoire who recently converted to Judaism, Dec. 8, 2017. (Bonita Sussman)

Sussman said the three rabbis on the beit din — Leonard Book, Shmuel Mayteles and Andy Eichenholz — had Orthodox credentials. Book received his ordination from Jews’ College in London (now known as the London School of Jewish Studies), while Mayteles was ordained privately by a rabbi ordained by the Lander College for Men in Queens, New York. Eichenholtz, who lives in Israel but serves as a rabbi at a synagogue on Staten Island, New York, declined to say where he was ordained.

“I did not and will not involve yeshivot or other people in the special mitzvoth I do such as helping lost and neglected communities come to Judaism in the 21st century,” he wrote in an email.

The website for Congregation Ohel Abraham, his synagogue on Staten Island, says Eichenholz has studied at Yeshiva Mercaz Harav, an Orthodox yeshiva in Jerusalem.

Sussman sees the conversions as having a larger significance. She has said she sees her work as a way to “rebuild the Jewish people” following the Holocaust and the persecution of Jews in Arab countries.

“For me personally, it was a gradual realization that [Judaism presented] a God that I had been pursuing for a long time,” he said. “And today, now that I am Jewish, I am satisfied.”