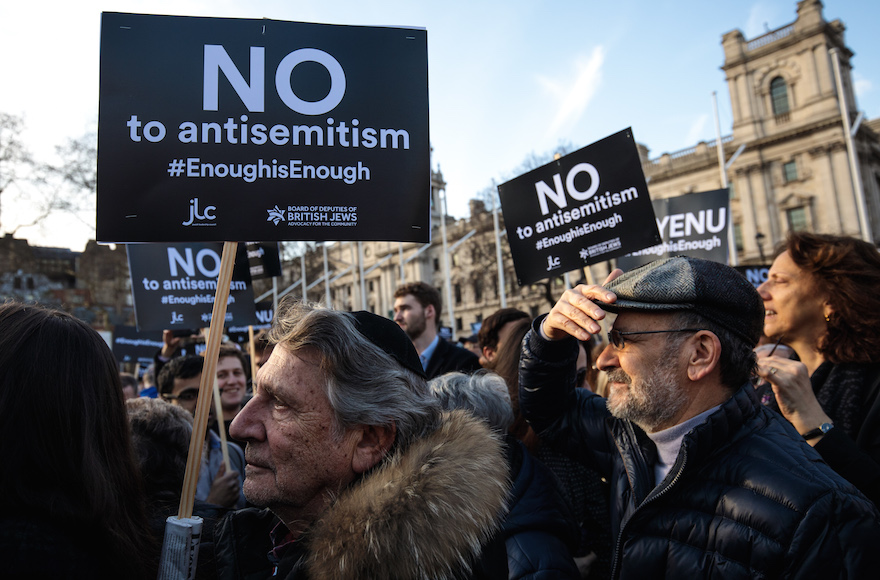 LONDON (JTA) — On Sunday, hundreds of British Jews stood outside the Houses of Parliament and demonstrated against the leader of the opposition Labour Party, Jeremy Corbyn.

The event was unprecedented, not just because almost no one in Britain has ever taken to the streets to demonstrate against the opposition, but because British Jews have little history of public confrontation, instead preferring to keep their heads down and face their challenges behind closed doors. The one famous occasion in which British Jews did take to the streets was in the 1930s, when they challenged the fascists in what is known as the Battle of Cable Street. Ironically, Corbyn frequently cites that confrontation as a political shield to demonstrate his anti-racist credentials.

“My mother was at Cable Street” has become Corbyn’s rallying cry.

Corbyn, 68, has roots firmly in the hard left of the Labour Party. Since 1983, he has served as the minister of Parliament for the central London constituency of Islington North, never holding any kind of ministerial office. Instead, Corbyn was a passionate activist supporting every kind of hard left cause – with particular backing for the Palestinians. Throughout the ’80s and ’90s, he was a regular face at every conceivable anti-Israel event. He became a patron of Palestine Solidarity Campaign, and was president of the hard-line Stop the War Coalition, which opposes the post-9/11 wars in Afghanistan, Iraq, Libya and elsewhere.

His entire approach — and that of his admirers — has been that as an anti-racist he cannot possibly be anti-Semitic. The Jewish community begs to disagree.

So in 2015, when Corbyn’s name was added, in the name of ”diversity,” to the Labour leadership ballot to succeed Ed Miliband, some people thought it was a joke. Others were more nervous.

Their anxiety, sadly, has been validated. Corbyn’s predilection for associating with extremists, whose uniting feature was their antipathy to Israel, has let the anti-Semites out of the bag. Since 2015, under his watch, there have been countless anti-Semitic attacks on social media. Jewish members of Parliament have been subjected to vile abuse, and dozens of people have been suspended from the Labour Party because of anti-Semitic declarations – either directed at Jews in general, or against people within their own local Labour Party. One of Corbyn’s closest associates, former London mayor Ken Livingstone, was suspended for saying Hitler was a supporter of Zionism. Jewish leaders wanted him thrown out altogether; he remains a member of Labour.

In 2016, Corbyn asked the outgoing chief executive of a political think tank, Liberty, to hold an investigation into anti-Semitism within the party.

Shami Chakrabarti’s report conceded that there were pockets of anti-Semitism within Labour, and recommended that abusive terms such as “Zio” should not be used. At the very news conference at which her report was launched, a hard-left extremist verbally attacked a Jewish Parliament member to the point where she left in tears. Corbyn, standing beside Chakrabarti, said nothing, and was filmed later in deep conversation with the activist. Chakrabarti, incidentally, was rewarded with a peerage; the report was condemned as a whitewash by many in the community. 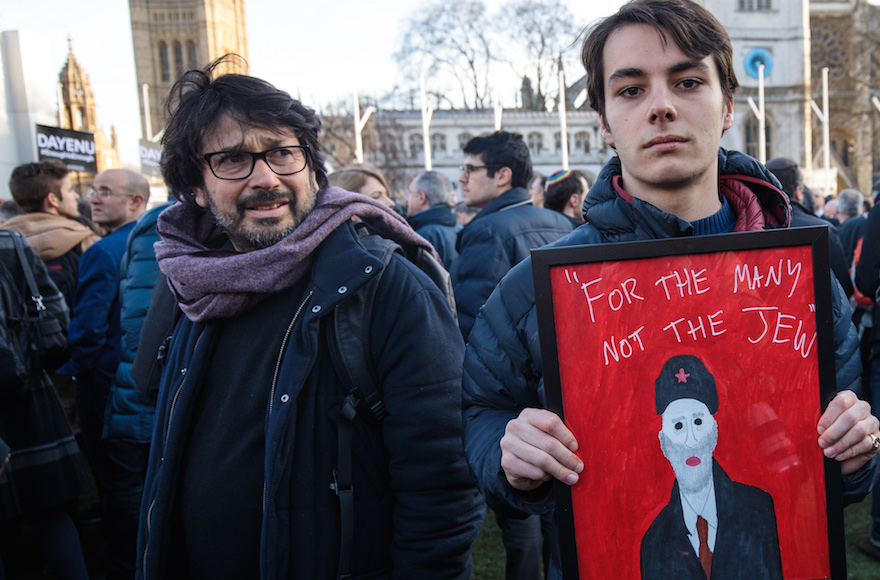 A demonstrator holding a sign referencing the Labour Party’s motto “For The Many Not The Few” at the protest in London, March 26, 2018. (Jack Taylor/Getty Images)

All of this would have been bad enough had these been problems merely inherited by Corbyn. In the last months, however, more and more evidence has been appearing about Corbyn’s own involvement in dubious, anti-Semitic areas of social media. A pro-Israel researcher, David Collier, compiled a meticulous account of a Facebook group called Palestine Live. It emerged that Corbyn had been a member of the group, a number of whose members have posted Holocaust-denying or anti-Semitic material. Corbyn did nothing to denounce these posts. It was later claimed that he had been made a member of the group without his knowledge, but subsequent reports showed that was not possible — and it became clear that he was a member of at least two other shady Facebook groups with similar kinds of posts.

What really brought matters to a head was the unlikely story of a mural painted six years ago on the side of a building in Tower Hamlets, in east London. The picture shows a group of stereotypical Jewish caricatures, apparently bankers, sitting around a table that is held up by the oppressed poor. The mural caused outrage when it was first displayed, and even the local mayor at the time, no lover of Jews, denounced it as anti-Semitic and ordered it erased.

The artist complained on social media and Corbyn himself responded, asking why the painting should be removed. When his response was revealed, first in 2015 and again last week, a furious Jewish Labour Parliament member, Luciana Berger, pressed for a better explanation. At first, Corbyn said that he had not looked properly at the painting, which he now agreed was anti-Semitic. Berger said this was not good enough, and that she was ready to challenge him at this week’s Parliamentary Labour Party meeting, the last one before the Easter recess.

But before that could happen, the Jewish leadership – the 250-year-old Board of Deputies of British Jews , and the relatively new Jewish Leadership Council — stepped in. On 24 hours’ notice, the two groups, which represent mainstream Jewish communities in the United Kingdom, organized a protest under the slogan Enough is Enough.

Nearly three years of endless complaints about Corbyn and his response to anti-Semitism had come to a boil.

Jonathan Arkush, president of the Board of Deputies, and Jonathan Goldstein, chairman of the leadership council, wrote an open letter to MP John Cryer, the influential chair of the Parliamentary Labour Party.

“We have had enough of hearing that Jeremy Corbyn ‘opposes anti-Semitism,’ whilst the mainstream majority of British Jews, and their concerns, are ignored by him and those he leads,” they wrote.

“Again and again, Jeremy Corbyn has sided with anti-Semites rather than Jews,” they wrote. “At best, this derives from the far left’s obsessive hatred of Zionism, Zionists and Israel. At worst, it suggests a conspiratorial worldview in which mainstream Jewish communities are believed to be a hostile entity, a class enemy.”

Hundreds of Jews were delighted to heed the call to demonstrate against Corbyn on Sunday. As nearly every speaker at the rally made clear, no one in the Jewish community has a problem with support for Palestinians or criticism of Israeli government policies. The difference is, however, when the criticism leeches into Israel’s right to exist and when anti-Zionism, unwelcome but legitimate, spills over into overt anti-Semitism.

Corbyn himself did not attend the Parliamentary Labour Party meeting on Sunday. However, he and his advisers were clearly taken aback by the strength of feeling on the part of the Jewish community. Corbyn’s office issued a number of letters reaching out to British Jews, each one more ingratiating than the last. He has not quite apologized for associating with people who have a visceral hatred of the Jewish state. But he has proclaimed himself an “ally” in the fight against anti-Semitism.

Jeremy Corbyn, leader of the Labour Party, outside the Houses of Parliament in London after the United Kingdom voted to leave the European Union, June 24, 2016. (Rob Stothard/Getty Images)

Perhaps the most telling part of his latest letter is this section: “Newer forms of antisemitism have been woven into criticism of Israeli governments. Criticism of Israel, particularly in relation to the continuing dispossession of the Palestinian people, cannot be avoided. Nevertheless, comparing Israel or the actions of Israeli governments to the Nazis, attributing criticisms of Israel to Jewish characteristics or to Jewish people in general and using abusive phraseology about supporters of Israel such as ‘Zio’ all constitute aspects of contemporary antisemitism. And Jewish people must not be held responsible or accountable for the actions of the Israeli government.”

It remains unclear quite why “criticism of Israel cannot be avoided,” or why a one-sided focus on the Palestinians is such a priority for a British political party.

Corbyn appears to think that his next step is something he has avoided for the best part of the last three years: a meeting with the Jewish community leaders.

He is now more anxious to meet the Jews than the Jews are to meet him. No such meeting has yet been arranged, and centrist Labour lawmakers are tearing their hair out over the damage that has been done to the century-old relationship between British Jews and Labour. At least two non-Jewish MPs, John Mann and Wes Streeting, have complained to the leader’s office that  they have been subjected to a torrent of online abuse for supporting the Jewish community. Several more MPs have been threatened with de-selection by their local parties for having supported the rally. The Board of Deputies and the Jewish Leadership Council have now set out a series of conditions that they want Corbyn to implement in order for a meeting to take place. The most urgent of the conditions is that Corbyn makes it clear in his own voice that anti-Semitism is not a “smear” against him and Labour’s inner circle.

Many Jews now say they cannot bring themselves to vote for a party led by Jeremy Corbyn, no matter how much he proclaims himself the community’s friend.

And on social media, the abuse and the insults roll on. “Corbynistas,” as his supporters are known, denounce the Jewish community for “weaponizing” anti-Semitism in order to topple Corbyn and prevent him from becoming prime minister. Anti-Semitism has been described as “mood music” by the leader of one of Britain’s trade unions, Len McCluskey. His partner, Jennie Formby, has just become general secretary of the Labour Party.

Nobody in the Jewish community is expecting major change anytime soon.