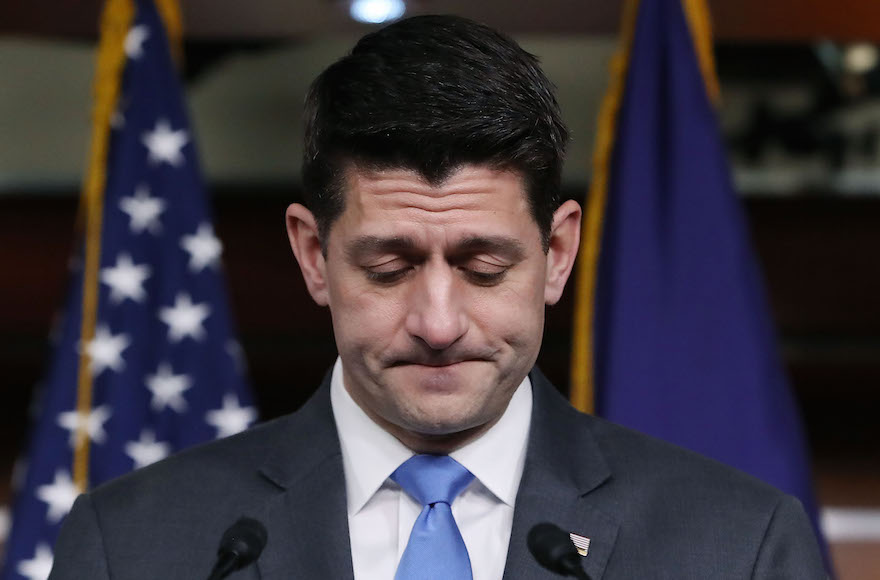 House Speaker Paul Ryan announcing he will not seek re-election for another term in Congress, during a news conference at the Capitol, April 11, 2018. (Mark Wilson/Getty Images)
Advertisement

WASHINGTON (JTA) — Thanking House Speaker Paul Ryan for his service, the Republican Jewish Coalition urged the party to seek an alternative to the racist candidate who is running in Ryan’s Wisconsin district.

Ryan said Wednesday that he would serve out his term as speaker, but would not run again this year in order to spend more time with his family.

Paul Nehlen, a far-right candidate who challenged Ryan in the 2016 primary and was beaten soundly, is mounting another run this year. He peddles anti-Semitic tropes about Jewish control of the media.

“Although a fringe candidate with abhorrent neo-Nazi views was already running against the Speaker, we are very confident that with the leadership of the Wisconsin GOP, the eventual Republican nominee to fill Paul Ryan’s House seat (WI-01) will be someone who upholds the GOP’s best values and traditions,” Matt Brooks, the RJC’s director, said Wednesday in a statement.

Nehlen has raised $160,000 for his run, according to the Open Secrets election monitoring website. The only other Republican contender, Nick Polce, an Army Special Forces veteran, has raised under $18,000. The primary is Aug. 14.

“We call on the Republican Party to strongly disavow Paul Nehlen and on all Republicans to condemn Nehlen and his candidacy,” said the Jewish Democratic Council of America in a statement. “Anti-Semitic candidates must not be tolerated.”

Nehlen has also embraced the white supremacist slogan “It’s okay to be white,” seemed to endorse a book that blames Jews for introducing vice into Nordic societies, and tweeted a list of media executives he identified as Jewish or married to Jews.

The RJC has said that it was a mistake that the Republican Party failed to stop a neo-Nazi from winning the GOP primary last month in Illinois’ 3rd Congressional District. National and state Republicans did not bother to seek or back a candidate in the safely Democratic district comprising parts of Chicago and its southwestern suburbs, leaving the field to Arthur Jones, a one-time leader of the American Nazi Party.

“The GOP didn’t invite Jones into the party. The only mistake was not running a candidate in an uncompetitive, safe-Democrat district,” RJC Chairman Norm Coleman said after the primary last month. “There is no place for Nazis and white supremacists in the Republican Party. Arthur Jones will never be accepted in our party.”

With Ryan’s departure, the district, Wisconsin’s 1st, could go Democratic, according to political forecasters. Randy Bryce, an ironworker and union leader who caught public attention when he excoriated the jobs policies of Ryan and President Donald Trump, reportedly has raised nearly $5 million, mostly from small donations, in his bid for the Democratic nomination. Also running is Cathy Myers, a former teacher.

The RJC statement was otherwise effusive in its praise for Ryan, who has been solidly pro-Israel both as a congressman and as speaker of the U.S. House of Representatives.

“In his twenty years of serving his constituents and the people of America, Paul Ryan has never been shy about his passion for public policy and public service,” Coleman said in the statement. “He has been steadfast in his support for Israel throughout his career, and few have exemplified the inseparable bond between Israel and the United States more than Paul Ryan.”