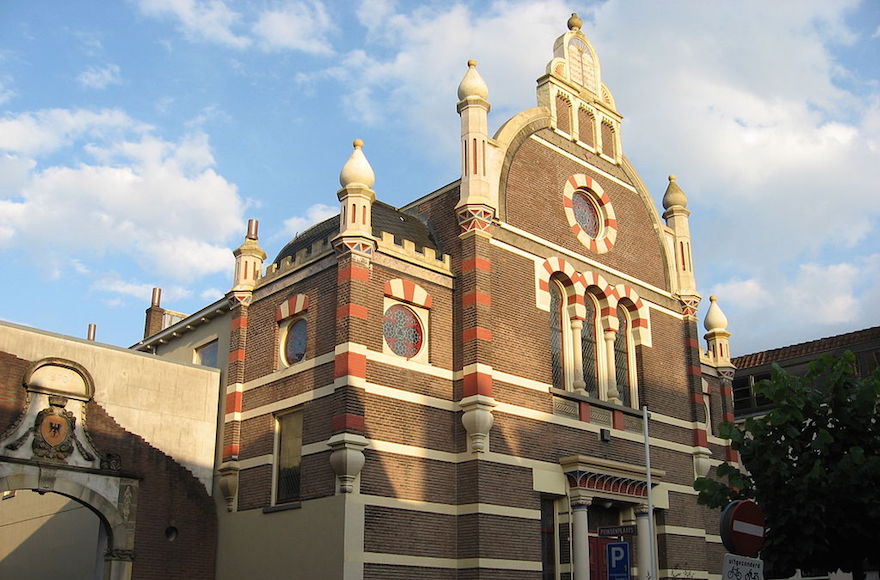 AMSTERDAM (JTA) — The Jewish community of Deventer in the east of the Netherlands is protesting a Dutch-Turkish entrepreneur’s plan to transform their former synagogue into a restaurant.

The synagogue on Gol Street, a tall building in the neo-Moorish style, was built in 1811. Developer Ayhan Sahin bought the building in January, the daily newspaper De Stentor reported Saturday.

Tom Fürstenberg, chairman of Deventer’s Beth Shoshanna Jewish community, made up of several dozen members, told the regional newspaper that it would be “scandalous” if the municipality approves Sahin’s plans.

Sahin recently submitted a plan to municipal authorities to transform the synagogue into an eatery – a plan that would be the end of Jewish institutional life in Deventer, Fürstenberg said. He also said the plan ran contrary to agreements made with Sahin. The Jewish community had hoped to continue to be able to use the establishment for religious purposes under new ownership.

Fürstenberg had said in the past that he hopes that whoever buys the former synagogue will restore it so that it continues to function as a Jewish institution. Across the Netherlands, nonprofit organizations and municipalities have taken over synagogues without communities, turning them sometimes into popular museums, as in Groningen.

In 1940, in the days following the German invasion into the Netherlands, members of the Dutch National Socialist Party ransacked the Deventer synagogue as police stood by, destroying the interior. By 1943, Deventer had no registered Jewish residents. The vast majority of them were murdered in Nazi death camps. The interior was restored after World War II.

In recent years, the small Jewish community of Deventer could no longer afford to maintain the large building, which is a listed national monument. It was sold to a local church, which resold it to Sahin for an undisclosed amount, the report said.

Sahin told De Stentor said his plan to turn the synagogue into a restaurant “is very interesting and one that would appeal to a lot of people from outside” Deventer. He also said he regrets hearing the local Jewish community would be without a space to worship if the plan is approved, but added he is “not the Salvation Army.” He also said he would be willing to allow the community to keep using the building if they pay “full rent” for it.