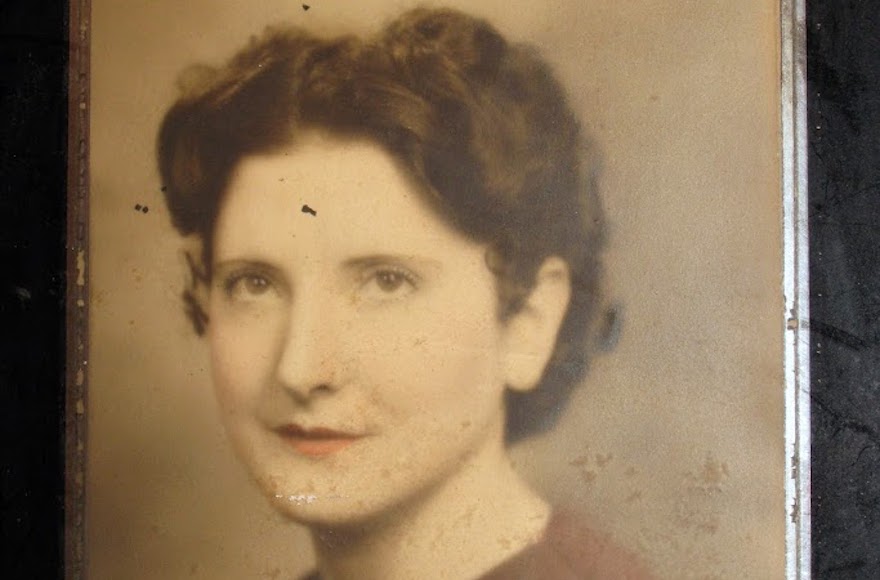 (JTA) — When Eleanor Roosevelt or Bess Truman sent a formal invitation to one particular White House staff member, they often addressed it in the customary form of days gone by: “To Mrs. William Reynolds,” the envelope would read.

Mrs. Reynolds, a dark-haired beauty who handled presidential correspondence, lived in Virginia and had a pronounced Southern accent.

It is doubtful her employers had any inkling that Mrs. Reynolds was born Bertha Hurwitz in 1903 to an Orthodox Jewish family in Lomza, Poland, immigrating with her mother to the Washington, D.C. area in 1913. Bertha’s father Yitzchak had earlier left for America, promising to send for his wife, his son Kalman, and his daughter, but was never heard from again.

I wasn’t able to confirm this, but Bertha, who began working at 1600 Pennsylvania Avenue in 1934 and remained there through the Eisenhower administration, may have been the longest-serving Jewish White House staffer in American history.

It’s a remarkable achievement, given prevailing attitudes about Jews in high places in those days. FDR’s mother Sara Delano Roosevelt conveyed the social anti-Semitism common to the times, and Harry Truman was known to drop an anti-Jewish slur despite his friendship with his Jewish business partner, Eddie Jacobson. Bess Truman prided herself on the fact that a Jew had never entered their home in Missouri.

It was into that hostile-to-Hebrews world that Bertha Hurwitz stepped during the early days of the first FDR administration. She had already stunned her family by marrying Treasury Department employee William Reynolds, who wasn’t Jewish, and made another then-unconventional choice by focusing on her job and never having children, although there may have been medical reasons for that.

Her brother Kalman, however, who lived in New York City, had three offspring, Shirley, Joe and Fran. They became Bertha’s “substitute children,” as Joe puts it.

“She was absolutely exotic in our family, with a certain elegance about her,” explains Joe, who lives in New York’s Hudson Valley. “Everyone in the family had a Yiddish accent, but there was no sense of her Polish background. She sounded like she was from Virginia, and I loved it when she read books such as ‘Chicken Little’ to me.”

Joe also knew that when Aunt Bertie came from Washington to visit her family in New York, there was bound to be a present.

“In 1950,” he recalls, “when I was 12, she handed me a piece of clear Lucite that encased a rusty nail and two pieces of stone-like matter, along with a small plaque reading ‘Original White House Material Removed in 1950.'” 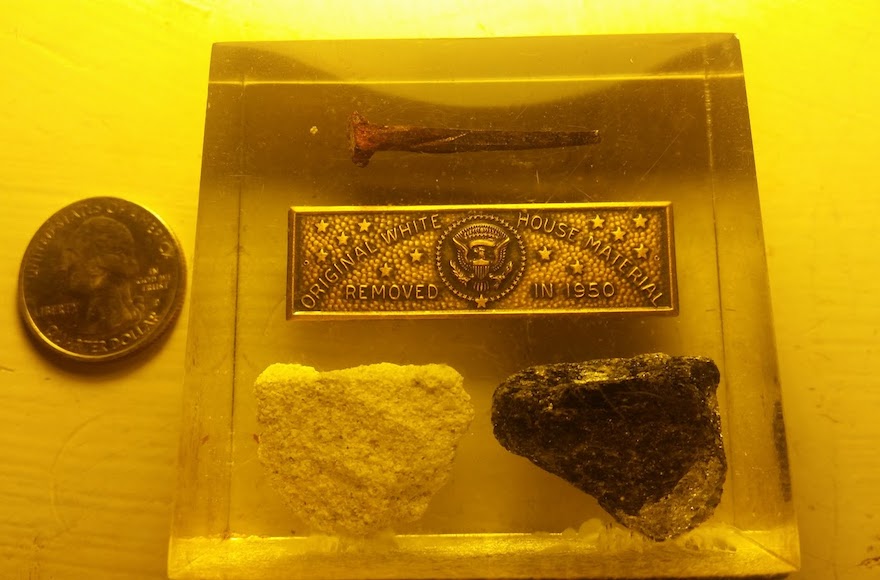 Bertha Reynolds once gave this plaque, which reads “Original White House Material Removed in 1950,” as a gift to her nephew. (Courtesy Joseph Hurwitz)

The historic mementos were a priceless byproduct of the Truman administration’s extensive interior renovation of the building between 1948 and 1952. Joe, an architect, keeps his aunt’s gift on his desk to this day.

“When I was about 10, in 1944, we went to the White House to visit her. I remember feeling so excited and so proud of her, and she was proud of me. She introduced me to all the people she worked with,” said Shirley.

During another Washington visit in the midst of World War II, Bertha showed her niece the so-called “Victory gardens” near her Arlington home.

Bertha was generous to her brother’s family.

“My father worked in the garment district and money was very tight,” Shirley remembers. “Bertie used to bring me beautiful dresses. And she took me to the theater! The first two plays I ever saw were ‘Kiss Me, Kate’ and ‘South Pacific,’ and she even got us box seats.”

Bertha’s nieces and nephew never asked for details about her job, and Joe says he simply knew she was in the secretarial pool and had “mentioned once that she was working with President Truman.”

But two documents provide more information: one says the position allows “exercise of independent judgment and initiative, (while) engaged in the briefing and cross-referencing of correspondence of the President and his Secretaries.” It lists responsibilities involving letters from political leaders and policy-makers, and speaks of maintaining “card indexes” for the president of his various appointments to the Cabinet and other departments. 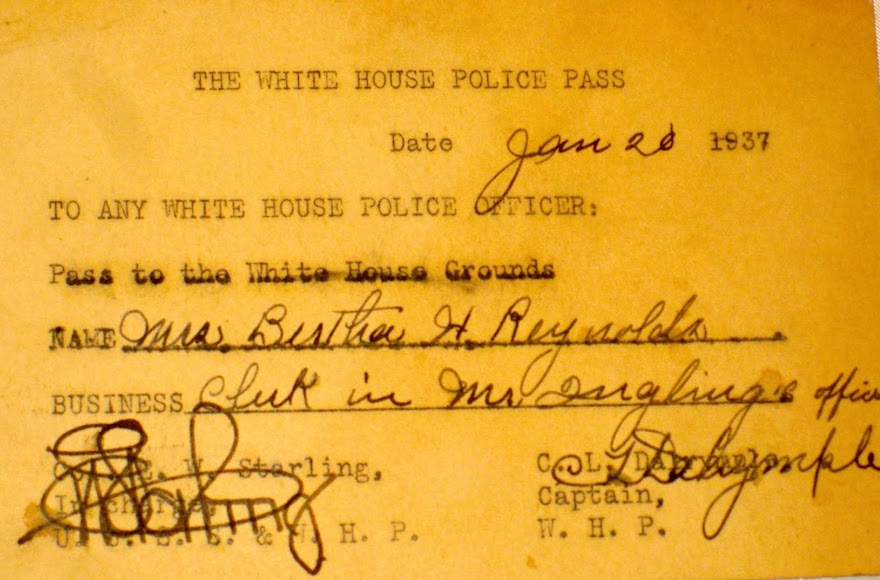 The second document, a letter from 1946, informs Bertha that “By direction of the President, you have been appointed Assistant Clerk … in the Executive Office of the President, the White House office, with compensation at the rate of $2544.48 per annum.” (The average annual income in the U.S. that year was $2,600.)

Bertha was widowed twice, first after a long marriage to Reynolds, then following a happy union with Jack Nalley, who, like her first husband, was not Jewish. She became ill in her 80s and moved to New York near her niece Shirley, living, appropriately enough, in the Franklin Nursing Home on Franklin Avenue in Queens. She passed away in 1991 at the age of 88, leaving her niece a suitcase bulging with various items that was stored in the attic of Shirley’s house for more than two decades.

Last year, Shirley realized she had to figure out what to do with that suitcase. Shirley and her husband, Rabbi Albert Thaler, are fixtures in the Conservative movement; he retired last year from Temple Gates of Prayer, Congregation Shaarai Tefilla in Flushing after 63 years in the rabbinate. Knowing that downsizing from their current home was inevitable, she asked if I would help her sort through Aunt Bertie’s “stuff” and decide what to do with it all.

Rabbi Thaler has been my family’s spiritual leader since 1958. He and Shirley long ago became close friends of my parents, and the lives of our two families have been intertwined for decades. In fact, we attended Passover seders annually at the Thaler home, and I recall Aunt Bertie — by then old and frail — sitting at the end of the seder table, beaming with pride at her nieces and nephew and their children.

One afternoon late last year, Shirley shlepped the suitcase down and opened it on the dining room table where Bertha used to sit. I was astonished as we removed, piece by piece, unexpected treasures from the past.

There were Christmas cards handed out to White House staffers, personally signed by Franklin and Eleanor Roosevelt and Harry and Bess Truman. Dwight Eisenhower put his John Hancock on a formal portrait, and Truman autographed a stylized version of his proclamation, on May 8th, 1945, that Germany had surrendered – which was given to his employees as an historic souvenir. 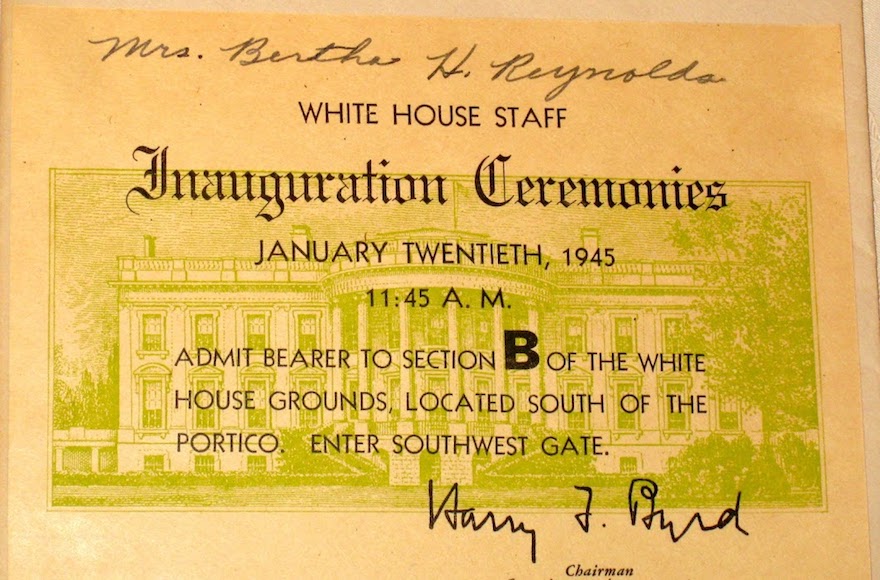 There was a group photo of three dozen smiling White House employees gathered in the Oval Office around Truman’s desk, with Bertha prominently situated at the front of the crowd.

Then there were the ornate invitations: to inaugurals, receptions, Christmas celebrations, and dozens of “garden parties” hosted by the First Ladies. One reads “Mrs. Roosevelt, At Home, on Saturday, May 18th at four o’clock. If the weather does not permit the garden party to be held (then), it will be held on Monday, May the twentieth, at the same hour.”

Bertha had saved nearly 40 invitations in all, along with passes that she had to present at the entrance to the events. The reverence she felt for the people she worked for and the unique experiences she had with them was almost palpable.

The organized secretary also kept personal diaries, and all the notes and cards she ever received from her nieces and nephew (who, in their early years, often wrote to “Aunt Birdie”, thinking that was her name). Those, Shirley decided, she had to save. But some of the historic memorabilia was auctioned off online this month — Truman’s signed World War II proclamation alone went for $5,500 — and the rest will be sold in August by Heritage Auctions.

So these are the final gifts from a doting Aunt Bertie to her adored nieces and nephew. I’m sorry I never thought to ask at those Passover seders about her life and career — one can only imagine the stories she could tell. But for now, “Dayenu.” It’s enough to know that a young Jewish woman from a shtetl in Poland ended up serving her adopted country alongside several of America’s greatest leaders, and witnessing, up close and personal, some of the most momentous events of the 20th century.