I voted against the Iran nuclear deal. Withdrawing from it is a mistake. 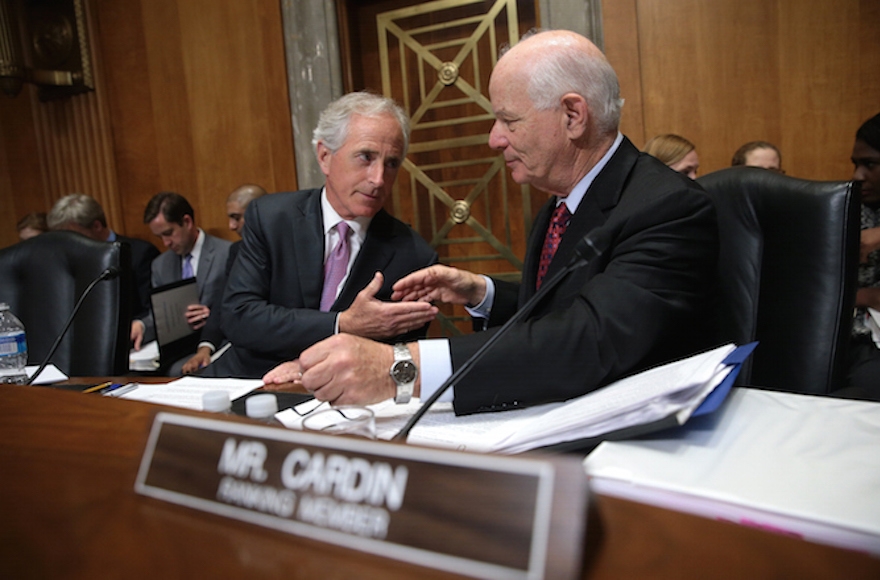 WASHINGTON (JTA) — President Trump’s decision to withdraw the United States from the Joint Comprehensive Plan of Action, known as the Iran nuclear deal, is bad policy and calls into question America’s international credibility.

Mr. Trump has now set the international community on a slippery slope, imperiling the national security interests of the United States and our allies, particularly Israel.

I voted against the Iran nuclear deal three years ago because I felt it left certain long-term questions about Iran’s enrichment capabilities unanswered. Since it was entered into however, I have worked to ensure there is rigorous enforcement and oversight of the deal. Three years in, Iran is complying with its end of the nuclear bargain, according to international observers and American intelligence officials.

But the United States is now breaking the deal, poised to re-impose sanctions that were lifted on Iran for the promise of ceasing their nuclear weapons program.

President Trump has breathed air into Tehran’s inevitable argument to the international community: We kept our end of the deal, but America is not good for its word and cannot be trusted. It is in fact America who has violated its obligations under the deal.

That is a deeply unfortunate and frankly dangerously embarrassing prospect, because Iran is one of the most nefarious actors on the world stage, playing a destabilizing role across the Middle East and proudly carrying the mantle of the greatest nation-state threat to Israel today.

The Ayatollah and the hard-liners in Tehran have propped up Bashar al-Assad’s murderous rampage against the Syrian people and propelled the collapse of that country’s economy and infrastructure – direct, physical threats to Israel. Tehran has fueled the civil war in Yemen and exacerbated the gross humanitarian crisis borne out of that conflict. And day by day, Iran seeks and seemingly achieves greater influence over the central government in Iraq.

I agree with President Trump’s concerns about Iran’s global posture and its non-nuclear actions. But we can keep the nuclear deal working while also going after Tehran for its support for terrorism, its human rights abuses against the Iranian people, its ballistic missile testing, and its violation of arms embargoes. These are not mutually exclusive actions.

Last year, Congress passed into law a number of sanctions and other tools President Trump could use to hold accountable three of America’s principle adversaries: Russia, North Korea and Iran. I was proud to co-author and negotiate that legislation through to final passage.

President Trump has not used the full power of his office, or the additional tools Congress granted him, to strengthen our hand and lead the international community against Iran.

It did not have to end up this way.

In 2015, as President Obama was nearing conclusion of the JCPOA negotiations, I worked with Senator Bob Corker in our capacities as the leaders of the Senate Foreign Relations Committee to write the Iran Nuclear Agreement Review Act. That bill asserted Congress’ right to review any agreements reached as part of the effort to keep Iran from acquiring a nuclear weapon. INARA passed each chamber of Congress with near unanimous support and brought greater accountability and understanding to the American people about the nuclear deal and why it was in our interests.

Donald Trump then became president and sought to make good on his campaign promise to tear up the deal. For months throughout 2017, I worked with then-White House National Security Advisor, General H.R. McMaster, to brainstorm possible changes to INARA that would not violate two of my principles: no changes that would have the U.S. violate its JCPOA obligations, and no changes without European concurrence.

As the international community stands at the precipice of this cliff now created by President Trump’s decision to withdraw the U.S. from the Iran nuclear deal, I am mindful of two immediate realities.

First, when Israel looks north, she sees Iran staring back from its strengthened footholds in Syria and Lebanon. President Trump’s decision to walk away from the deal will inevitably embolden Iran and endanger Israel.

Second, within the month President Trump is expected to sit down with North Korean dictator Kim Jong-un as part of the international effort to denuclearize the Korean peninsula and end the Korean conflict. Our friends and partners will understandably approach this important endeavor more cautiously now given Mr. Trump’s decision to violate U.S. obligations under the Iran nuclear deal. Will the U.S. keep its word this time?

At the end of the day, the JCPOA is an executive agreement that the president can leave at any time. But just because he can leave the agreement does not mean he should. Mr. Trump has failed to make a convincing case for U.S. withdrawal from the Iran nuclear deal and in the process, may very well have strengthened Iran.

(The author is a member of the United States Senate from the state of Maryland, and is a senior member of the U.S. Senate Foreign Relations Committee.)