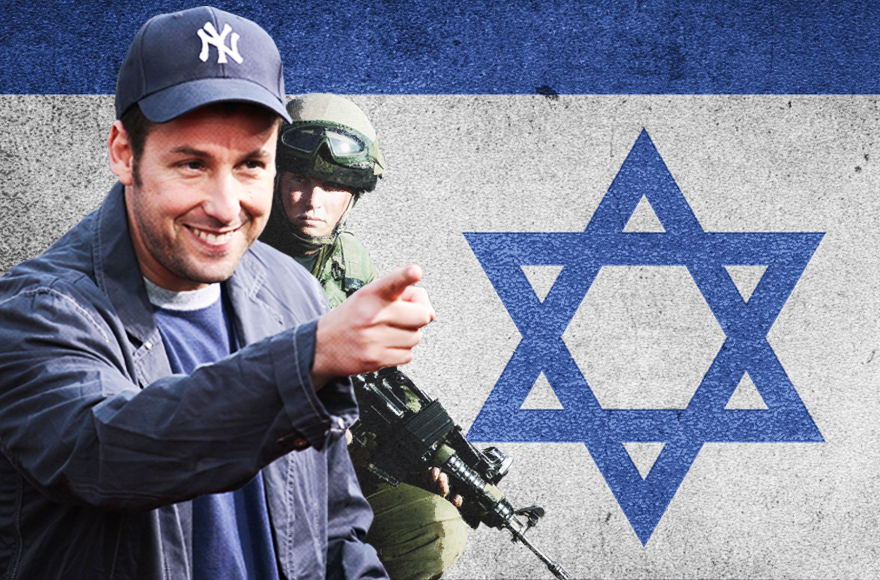 HOLLYWOOD - MAY 28: Actor Adam Sandler speaks to a fan during the "You Don't Mess With The Zohan" film premiere at Grauman's Chinese Theatre on May 28, 2008 in Hollywood, California. (Photo by Frederick M. Brown/Getty Images)
Advertisement

NEW YORK (JTA) — Whatever else you can say about the somewhat mixed legacy of his work, you certainly can’t question Adam Sandler’s credentials as an avatar of Jewish cultural pride. Chalk that up to his famous Hanukkah song, which name-checked an array of famous Jews, his Hanukkah-themed animated comedy “Eight Crazy Nights” and the 2008 film “You Don’t Mess With the Zohan.”

In “Zohan,” Sandler played an elite and legendary Israeli soldier who longs for a peaceful life. The film, which was released 10 years ago this week, was full of in-jokes about Jews and Israel — hummus practically serves as a supporting character — but it also actually expressed a liberal Zionist viewpoint that continues to disappear from modern Mideast discourse.

Sandler stars as Zohan Dvir, whose superhuman acts of fighting skill are rendered with cartoonish, over-the-top special effects. Zohan, though, is sick of fighting; he’d rather be partying with bikini-clad ladies on the Tel Aviv beach. His real dream in life is to be a hairdresser, and early on in the film he becomes emotional while flipping through an old Paul Mitchell hairstyle guide.

During a fight with his Palestinian counterpart, The Phantom (played by John Turturro, of course), Zohan fakes his own death in order to sneak into the U.S. and make his hairdressing dreams come true.

“I couldn’t take all the fighting anymore — what’s it all for?” he says in a thick, overstated Israeli accent.

Once in New York, an incognito Zohan finds work in a salon owned by an attractive Palestinian woman (Emmanuelle Chriqui) and is caught up in a miniature version of the Middle Eastern conflict in a Lower Manhattan neighborhood, where feuding Israeli and Palestinian immigrants operate businesses on either side of the street. By the end of the film, however, the two sides unexpectedly bond and reach something resembling an Oslo Accords on the Hudson.

The story was loosely based on Nezi Arbib, an Israeli army veteran who moved to the United States and started a hair salon. Sandler spent two weeks training with Arbib — in hairstyling, not military tactics.

“Zohan” has a lot of the scatological, lowbrow humor that’s long been associated with Sandler’s work, as demonstrated in a bizarre subplot that has Zohan making his name as a hairdresser by having sex in the back of the salon with female clients who are decades older than he is. It was directed by Dennis Dugan, who has helmed seven other Sandler films.

But the writers — Sandler, Robert Smigel and Judd Apatow — gave the film an ambitious satirical edge (the script also lifted some Israeli electronics store humor from a series of 1990s “Saturday Night Live” sketches written by Smigel). It offers a crowd-pleasing if unrealistic solution to the Israeli-Palestinian conflict that goes beyond two states: Outside the pressure cooker of the Middle East, Israelis and Palestinians can flourish together side by side by realizing how much they have in common and toiling toward the same goals. In the film’s New York, that means keeping one’s business afloat.

“Zohan” has all the forces joining against villains who turn out to be more dangerous than themselves — a Trump-like real estate developer and his redneck henchmen (led by singer Dave Matthews).

Even in 2008, the film was criticized for being both too Zionist and not Zionist enough. The left-wing magazine Counterpunch denounced it as racist and of expressing “a comedic approach to understanding the inner workings of the substandard Arab people.” Meanwhile, Gil Troy wrote that the film’s “happy ending comes when our hero abandons his country and his identity, joining the all-American intermarried mélange.”

Some aspects of the film don’t hold up well in 2018, starting with the casting of Palestinian characters with white actors such as Turturro, Chiriqui (who was raised in an Orthodox Jewish household) and Rob Schneider (who was born to a Jewish father). The absurd sex-in-the-workplace plot, along with other explicit comments, which weren’t especially funny in 2008, play even worse in the #MeToo era.

But in the end, “Zohan” coherently expresses a liberal Zionist worldview. Today, Israel is increasingly becoming a wedge issue — conservatives are expected to support Israel and all of its actions unconditionally, while liberals are expected to condemn all that Zionism stands for. This leaves liberal Zionists, or those wishing for a peaceful two-state solution and a more left-wing Israeli government, without much of a political home.

So much discourse about the Israeli-Palestinian conflict these days is either framed in terms of Israel heroically defending itself from invading hordes or heartlessly carrying out massacres — views that are simplistically whittled down to terms like “pro-Israel” and “anti-Israel.” “You Don’t Mess With the Zohan” shows us something we rarely see anymore in media or culture: an Israeli hero who is proud of his country and heritage and wants the best for both, but is also sick of fighting and desires peaceful coexistence.