In Sweden, Jews and Muslims united around Israeli flags at a gay pride parade 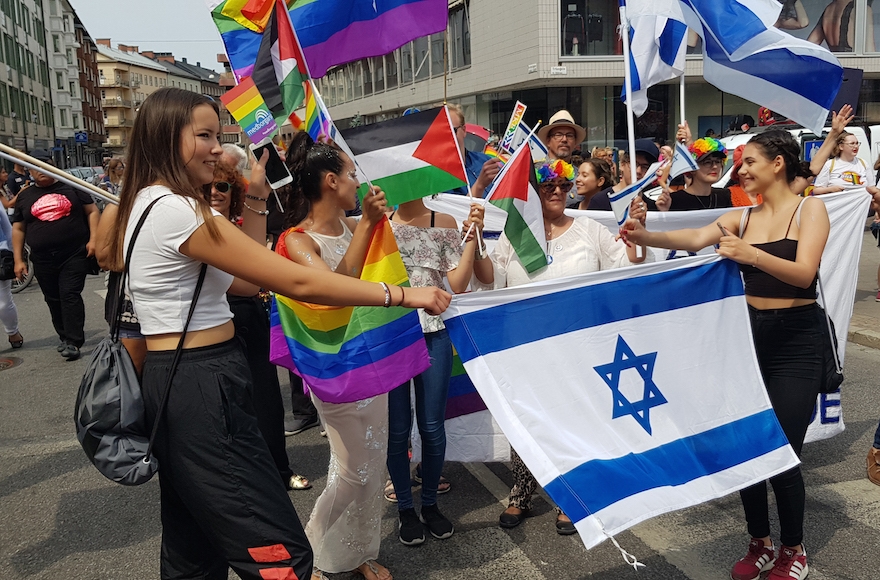 MALMO, Sweden (JTA) — This city is not the best place to fly rainbow flags emblazoned with a Star of David.

Its crime rate — among the highest in Scandinavia — and a large Muslim community make Malmo a flashpoint rife with interethnic and religious tensions. It is also notorious for its high rate of anti-Semitism, including harassment of Jewish leaders, attacks on synagogues and Jewish cemeteries, and anti-Semitic chants at protests.

That’s why Barbara Posner, one of Malmo’s approximately 1,000 Jews, was slightly apprehensive when she joined the Jewish contingent at the city’s gay pride parade earlier this month. It didn’t help that the event fell on one of the hottest days of the year and at the end of Ramadan, the Islamic month when Muslims fast daily between sunrise and sunset.

“I had some concerns, yes, but not enough to keep me away,” Posner, 66, said about the June 10 event. “I think it’s important Malmo’s Jews take an active part in all of the city’s major events, our backs straight and proud of our identity,”

It was the third consecutive year that local Jews organized their own group inside the parade, complete with flags bearing Jewish symbols and Israeli music blasting from a large trolley speaker that one participant, a Christian supporter of Israel, had schlepped all the way from Stockholm.

This year, the some 15 participants of the Jewish group were targeted with insults and threats, including by cyclists who shouted “f*** Zionists” at them and one man who ran a finger across his throat. But they also found their ranks joined by an Arab waving a Palestinian flag, a refugee from Syria and another one from Libya, as well as several non-Jewish Swedes who marched with them to show support.

To some Malmo Jews, that experience and others indicate that the combination of Jewish outreach and visibility can lead to change even in a city that some consider Europe’s anti-Semitism capital. But other observers say that animosity toward Jews runs too deep to be treated effectively in small events lasting several hours. 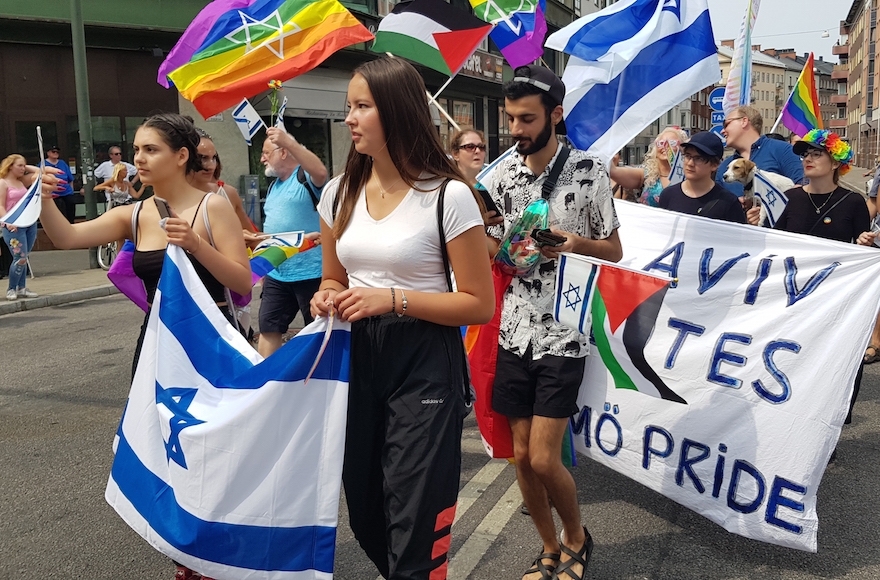 In addition to the Jewish presence at the pride parade last week, Jewish leaders in Malmo have reached out to Muslims and other non-Jews. In 2016, one of the city’s rabbis, Moshe David HaCohen, formed a partnership with a local imam, Salahuddin Barakat. In a state-funded project called Amana, HaCohen, who works for the Jewish Community of Malmo, and Barakat hold small interfaith study groups together and visit schools jointly.

“It’s definitely making an impact,” said HaCohen, 38, who moved to Malmo in 2016 from the West Bank settlement of Tekoa, about Amana and its activities. “There’s more quiet than before.”

Quiet is the ultimate goal for the Jews of Malmo. Many of them say they feel growing anxiety and even despair amid extreme expressions of anti-Israel sentiment and anti-Semitism in the city of roughly 350,000 residents, where Muslims account for about a third of the population.

The city’s Chabad rabbi, Shneur Kesselman, has complained to police more than 120 times over anti-Semitic assaults over the past decade. The problem erupted in Malmo in 2009, when protests over Israel’s war with Hamas in Gaza turned into anti-Semitic violence. That January, the local Jewish cemetery was firebombed.

Weeks later, riots broke out over the attendance of Israeli players at an international tennis tournament. Thousands staged an unlicensed protest march that included demonstrators hurling paint and bricks at police protecting the stadium.

The city registers dozens of anti-Semitic incidents annually — a vastly outsize share of the national tally in a country with some 20,000 Jews mostly residing in the capital city of Stockholm. In 2010, the Simon Wiesenthal Center published a “travel warning” on Malmo, advising Jews to skip it for safety reasons.

“It took a while until we decided to have a Jewish group at the gay pride parade,” said Ilana Edner, an Israel-born Swedish teacher living in Malmo who organized the Jewish parade marchers. “But we have to show we’re also here. It’s the only way we can negotiate a place for us here.”

At the June 10 march Edner, a Sephardic Jew who speaks Arabic, made a point of reaching out to non-Jews and Muslims. Logal Bet Kako, a gay refugee who belongs to Syria’s Assyrian minority, sang along to the songs of Dana International, the transgender Israeli woman who won the 1999 Eurovision song contest.

“I have many Jewish friends, and I didn’t see any Assyrian group at the gay pride parade, so why not?” Kako told JTA about his decision to join the Jewish contingent.

But the “highlight of the event” for Edner began when she noticed a 15-year-old Malmo-born Palestinian girl named Iman defiantly waving a Palestinian flag near the Jewish group.

“I asked her to join us,” Edner said of the moment she saw the girl. “There was a moment of hesitation and we were off, waving an Israeli flag and a Palestinian one, showing Malmo that we can get along.”

“I was just so touched by it, I was not expecting it at all,” Iman, who did not give her last name, told JTA. “It was so welcoming and so beautiful, I feel fortunate to have been part of this beautiful moment.”

Some onlookers applauded the unusual scene, which was featured prominently in local news articles about the parade. 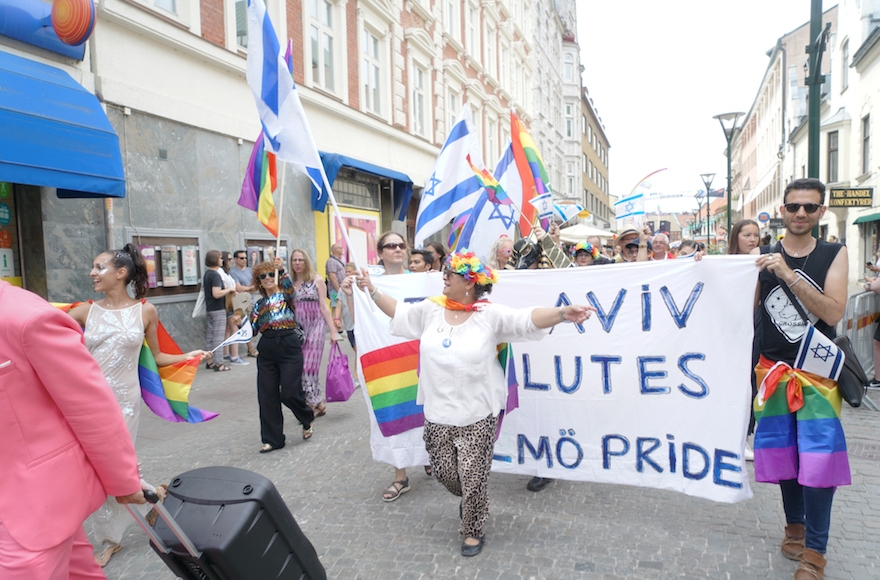 Ilana Edner, marching in front of the banner, with participants of the Jewish contingent of the gay pride parade in Malmo, Sweden, June 10, 2018. (Cnaan Liphshiz)

But Iman’s presence, waving a Palestinian flag alongside Israeli ones, also triggered hostility. Other onlookers shouted at the girl to go away, yelled “Shame on you” and made gestures at her head suggesting that she was crazy. To protect Iman’s identity, Edner gave her a mask borrowed from another marcher who came dressed in a Pharaoh costume.

HaCohen, an Orthodox rabbi, said he is not too keen on the Jewish group’s presence at the gay pride parade. But he and Edner agree that visibility is key to the fight against anti-Semitism in Malmo.

“It’s understandable, but Malmo’s Jews perhaps have not been open enough with their identity,” he told JTA. “It’s a Catch-22: Jews are afraid so they lower their profile, people aren’t used to seeing them and it doesn’t allow for interaction. It’s not a good dynamic.”

Visibility notwithstanding, Malmo’s anti-Semitism is “widespread and deep,” Kesselman, the Chabad rabbi, told JTA. Which is why “the audiences reached through these [outreach] sessions are not necessarily where the problem is rooted.”

Kesselman says he and his family have experience repeated anti-Semitic harassment on the street, and told JTA he has not “seen any change on the ground because” of any outreach program.

“But it’s also unfair to expect or demand change,” he said. While Kesselman supports interfaith dialogue, he says it has “a limited potential for doing that in the short term. The long term is also a question.”

Posner said she would not feel safe wearing a Star of David pendant in the heavily Muslim southern parts of Malmo.

Frida Eriksson, a Jewish widow and mother of one from Malmo, says there are areas where she does not feel safe walking not only because she’s Jewish, but because she’s a woman.

HaCohen is more optimistic. He cites how leaders of pro-Palestinian groups and Muslim faith leaders have made a series of statements rejecting violence against Jews.

“These things are unprecedented,” he said.

Edner said that HaCohen’s outreach efforts “have resulted in little more than rhetoric.”

“Malmo’s city authorities, which fund Amana, are obviously seeking a PR project that they can use to deflect pressure,” she said.

The statement said that “Jews and Muslims stand united in the struggle against anti-Semitism, hate of Muslims and all forms of hatred and discrimination against minorities.” The Jewish community called it a “peace declaration between Jews and Muslims.”

HaCohen defended the text, saying it was “significant” because it was the first time a leader of the Muslim community in Malmo had stated those sentiments in writing.

Posner, the retired city worker, says she supports both HaCohen’s vision of outreach and Edner’s activities.

But her long years working in the city’s education system has made her unsure whether Jews will be able to remain there long term. With local schools suffering “extreme segregation” between ethnic Swedes and those with an immigrant background, she said, “I fear there may not be such a future.”