Detention facilities or ‘concentration camps’? A debate on names invokes the Nazis. 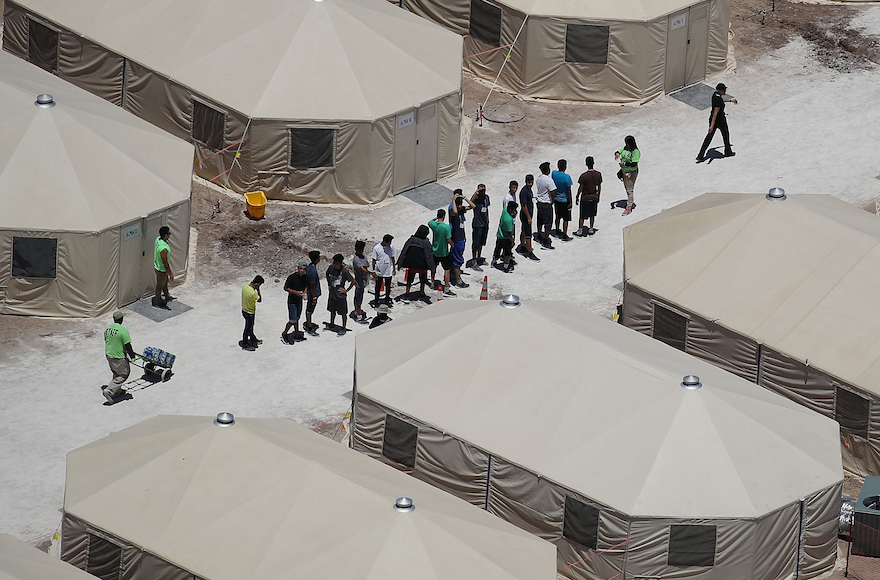 Children and workers at a tent encampment recently built near the Tornillo Port of Entry in Tornillo, Texas, June 19, 2018. (Joe Raedle/Getty Images)
Advertisement

WASHINGTON (JTA) — Simmering beneath the heated debate over whether Holocaust references are appropriate in the debate over the Trump administration’s policy of separating migrant families is a question of terminology: Are the shelters where the migrants are housed correctly described as “concentration camps”?

The debate is raging among Wikipedia’s editors after one of them added the facilities housing the children to the crowd-sourced encyclopedia’s entry “List of concentration and internment camps.”

Editors opposing the usage appear to be unsettled in part by the attention the revised Wikipedia entry has accrued, with Gizmodo, Vice and the Daily Kos each devoting major articles to the addition as a seeming validation of the awfulness of the detention policy.

More to the point, the Wikipedia dissenters question the accuracy of the designation: Are the centers correctly described as concentration camps?

Here are some of the complicating factors:

According to a Department of Homeland Security fact sheet, migrant children and parents may be separated when “individuals who are believed to have committed any crime, including illegal entry,” are “referred to the Department of Justice.” DHS then transfers children to the custody of the Office of Refugee Resettlement, where they are held in a “temporary shelter” until a sponsor can be found for the child. Reports suggest these shelters include large centers with dormitory-like accommodations. Meanwhile, the adults are held in what the government calls “detention facilities” pending hearings.

The Encyclopedia Britannica defines a concentration camp as an “internment center for political prisoners and members of national or minority groups who are confined for reasons of state security, exploitation, or punishment, usually by executive decree or military order.” That definition comports with the arguments of those who note that the separations and detentions are being used to punish or deter would-be migrants, as some administration officials have acknowledged.

But the encyclopedia adds several caveats. Here’s one: Concentration camps, Britannica says, are “to be distinguished from refugee camps or detention and relocation centers for the temporary accommodation of large numbers of displaced persons.”

Whether the detention facilities at the border and beyond contain people “confined for reasons of state security, exploitation, or punishment” by Presidential Donald Trump’s “executive decree,” or whether they are “relocation centers for the temporary accommodation” of “displaced persons,” is the debate exercising the editors at Britannica’s scrappier rival, Wikipedia, and also informing the broader political debate.

“These children are not being held without trial,” editor Flamous1 said in the online encyclopedia’s behind-the-page debate. “Moreover, they weren’t taken from their parents from their homes and then imprisoned (ex: Nazi, Japanese situations). They are held, just like any other asylum applicant, until the hearing can be heard.”

Kellyanne Conway, a top adviser to Trump, said on NBC’s “Meet The Press” over the weekend that the intention was simply to facilitate returning the migrants to their countries of origin, not to punish them.

“There are ways to repatriate these people back to their home countries expeditiously,” she said.

Joel Pollak of Breitbart News calls the concentration camp comparisons an abuse of the Holocaust and considers the separation policy humane, not punitive.

“When the U.S. Border Patrol separates children from parents who are arrested, it is to protect the children, and help them, with the intention of reuniting them with their families,” he wrote. “When the guards at death camps like Birkenau separated children, it was to lead them to the gas chambers.”

Concentration camps, before and after the Nazis

Much of the debate has been clouded by the conflation of the phenomenon of concentration camps, which predate the Holocaust, and the camps introduced by the Nazis. The key difference is between temporary measures instituted by authoritarian regimes before the Holocaust and the permanent dehumanization of classes of people under the totalitarian Nazi regime.

The camps launched by the Spanish rulers in Cuba in the 1890s — seen by historians as the first concentration camps — sought to control a civilian population perceived as sympathetic to insurgents for the duration of an operation aimed at quelling an uprising. The same is true of the camps that the British established in the subsequent decade to control the Boer insurgents in South Africa.

In both those cases, and in subsequent manifestations, concentration camps were inhumane and deadly — but not permanent. The authorities who established the camps hoped to quell opposition, not to establish a permanent system of imprisoning a designated class of citizen.

The same was true of the initial Nazi concentration camps, which were established shortly after the rise to power of Adolf Hitler in 1933. The first prisoners were “primarily Communists, Social Democrats and other political enemies of Nazism who were seen as being in need of political reeducation,” according to “The Holocaust Encyclopedia” edited by Walter Laqueur.

The SS assumed control of the camps within a year and by the outbreak of war in 1939, the camps’ mission had shifted: Many had become slave labor camps, housing populations the Nazis considered subhuman, including Poles, Slavs and Jews, and contracting their labor out to the German private sector.

Another tendency is to conflate concentration camp with Nazi death camps, which had a single overriding purpose: the extermination of the Jews.

So are these concentration camps minus the Nazi baggage?

Andrea Pitzer, a historian who last year wrote a book “One Long Night,” on the history of concentration camps, believes the designation is accurate in this case.

“Yes, of course they’re concentration camps,” she said this week on Twitter. “They aren’t the unique subset of death camps that were invented by the Nazis for genocide, or even Arctic Gulag camps built for hard labor. But they’re camps created to punish a whole class of civilians via mass detention without trial.”

Yes, of course they're concentration camps. They aren't the unique subset of death camps that were invented by the Nazis for genocide, or even Arctic Gulag camps built for hard labor. But they're camps created to punish a whole class of civilians via mass detention without trial. https://t.co/c8edQna4Vf

Given that the Trump administration said it is seeking an expedited solution, and that displaced persons conventionally spend time in relocation centers, I asked Pitzer to expand on her conclusion that these are indeed concentration camps. She said what was key to her determination was how other Trump officials, including Attorney General Jeff Sessions and top Trump adviser Stephen Miller, have described the policy as a deterrent.

“So we have punitive detention being used against asylum seekers, adults and children alike,” Pitzer said. “It’s a policy that wasn’t in place before under other administrations, and there’s no law requiring it. It wasn’t adopted as an emergency measure to deal with a new problem or a massive influx. People are being deported without their children, which is as punitive a measure as one can imagine. What can you take from people who have nothing? Their children.”

Deborah Lipstadt, the Holocaust historian, said it was not helpful to focus on the correct terminology while an event is underway.

“Ten years from now if we’re sitting around analyzing this from a historical point of view, we can make comparisons,” she said in an interview, noting for instance that it took years to precisely define the carnage in Cambodia in the 1970s as a civil war that included a genocide rather than a genocide in and of itself. “I think the comparisons are made too easily and too glibly; the comparisons don’t get us where we need to go.”

Lipstadt said the Trump administration’s policy of separating children from their parents as a deterrent measure should be regarded on its own terms, whatever historical term eventually defines it.

“Something doesn’t have to be like the Holocaust to be awful, to be just plain wrong,” she said. “Separating children from their parents, children in diapers, putting them in cages, listening to them weep — it’s treating people like commodities.”

Get the inside scoop on the week’s Jewish political news in your inbox. Sign up for The Tell, our new weekly email by Ron Kampeas, JTA Washington Bureau Chief.