With time running out, we must engage with Holocaust survivors 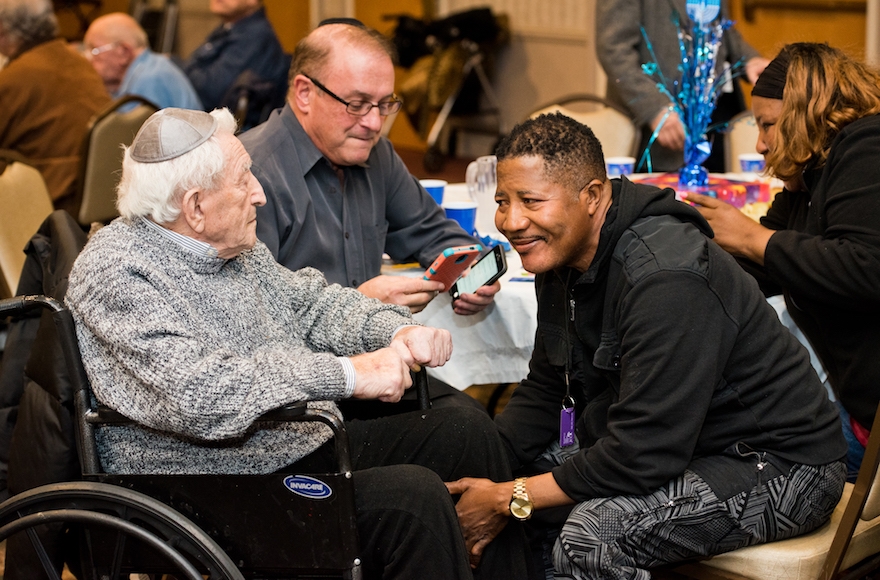 Holocaust survivors and visitors attend a Hanukkah event at Café Europa in Cherry Hill, N.J. in 2016. (Courtesy of the Claims Conference/Jordan Cassway)
Advertisement

(JTA) — There are over 400,000 Jewish Holocaust survivors worldwide, but the survivor population is rapidly diminishing. As we prepare to celebrate the High Holidays and mark the beginning of another year, each of us needs to reflect on what we have done in the past year to support this shrinking community and commit to doing more for them in the coming year.

If you have never met a survivor, you are not alone. The Holocaust Knowledge and Awareness study conducted in April in the United States revealed that U.S. adults have little personal connection to the Holocaust, and 66 percent have never met a Holocaust survivor. This is unfortunate, as meeting and engaging with survivors and learning about their experiences firsthand can significantly impact the way individuals perceive Holocaust-related issues as well as hatred and bigotry overall.

Damage perpetrated during the Holocaust and the resulting grief and pain continues to this day. Consequently it is never too late to reach out to survivors, and it’s always necessary. Engaging may be easier than you think. Events recognizing and celebrating survivors can be found around the globe at local synagogues, Jewish organizations and social welfare agencies that specialize in elder care.

For example, Hanukkah 2017 marked the first International Holocaust Survivors’ Night – a day set aside to honor survivors. On the third night of Hanukkah, simultaneous candle-lighting ceremonies were held in New York City, Berlin and Jerusalem at the Western Wall. This year, International Holocaust Survivors’ Night events will expand to include candle-lightings in Paris, London and Moscow.

Moreover, Claims Conference-sponsored Cafe Europas – local gatherings of Jewish Holocaust survivors that include entertainment, dancing and often a meal – are hosted by social welfare agencies around the world. Each Cafe Europa provides a special opportunity to hear firsthand testimony about the Holocaust and observe what it is to still have hope and a positive outlook despite having been forced to endure the darkest chapter of human history.

The Holocaust Knowledge and Awareness study also indicated that 58 percent of Americans believe something like the Holocaust could happen again. This bleak yet sobering outlook confronts us with the knowledge that as a global community, we have not done enough to address the bigotry and hatred that paved the road to genocide more than 70 years ago. Such a finding underscores the unmistakable importance, and urgency, to “never forget.”

To that end, and despite the lack of knowledge about the Holocaust revealed by the study, there was a silver lining in the survey: 93 percent of Americans agree that all students should learn about the Holocaust in school, believing that education is the key to preventing the recurrence of such a horrific tragedy. This could serve as a strong foundation for leveraging local campaigns for survivor engagement and public education. Currently, only 12 states mandate Holocaust education in their schools. While the number is small, it represents an opportunity, a serious gap that an overwhelming majority of the country agrees should be addressed.

Let the plaintive cries of the shofar during these Days of Awe not only pierce that part of us that remains complacent with the way things are, let it also fortify our call to action for the new year: Find a way to engage with the survivors in your community. Invite survivors to share their experiences with your organization, synagogue or local school. Honor survivors on Dec. 4, the third night of Hanukkah. Contact your local and state representatives and push for Holocaust education in your schools. Try to bring Holocaust-related films to your community centers or neighborhood theaters with a related panel discussion including survivors.

All too soon, it will be too late. When the survivor population is gone, our opportunity to learn from them and enrich our lives passes as well. Clearly this call to action is no small ask. It requires diligence from survivor advocates and family members, innovation to develop new and creative ways to preserve survivor memories, and – most important – that we understand that whatever we do, it will never be enough.

During the Holocaust, the world stood by complacently while 6 million people were murdered; not for what they did, but for who they were. Make this new year different. Make this the year you take responsibility – or additional accountability – to support our survivor population. As long as there is a single survivor left it is not too late. In the end, our call to action is quite simple: Don’t just stand by. Do something. Get engaged with the survivors in your community.

(Julius Berman is president of the Conference on Jewish Material Claims Against Germany (Claims Conference) and has headed many national Jewish organizations, including the Conference of Presidents of Major American Jewish Organizations, the American Zionist Youth Foundation and the Jewish Telegraphic Agency.)