Should Bill Clinton have shared a stage with Louis Farrakhan at Aretha Franklin’s funeral? 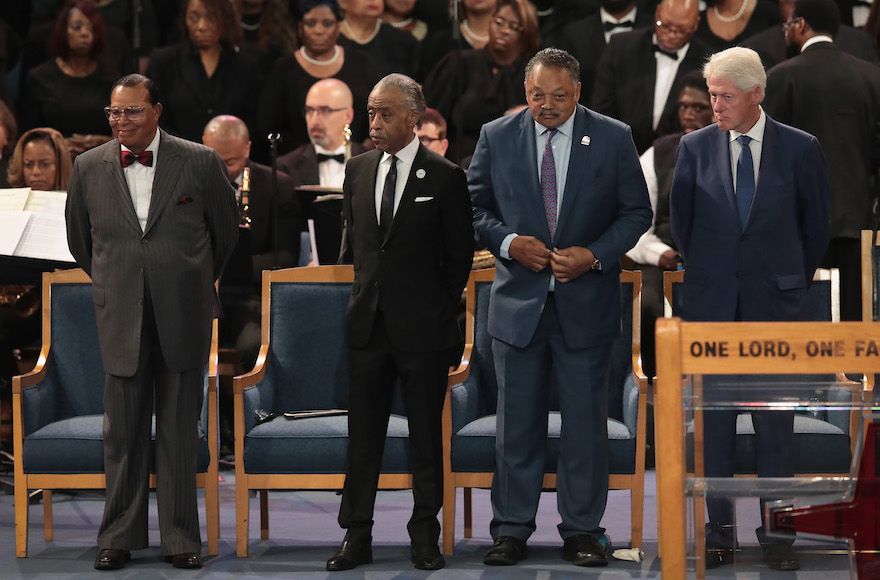 Barack Obama and George Bush spoke for McCain, a former rival of both, while Bill Clinton did the same for Franklin, who performed at his 1993 inauguration.

Liberals quickly rebutted the notion that for all the high-minded rhetoric about bipartisanship,  McCain’s memorial represented a meaningful rebuke of Donald Trump. Conservatives — and Jews of various political stripes — slammed Clinton’s willingness to share the stage with the anti-Semitic Louis Farrakhan, a guest of the Franklin family.

Although his Nation of Islam has been praised for promoting self-reliance and instilling pride within the black community for years, Farrakhan is a vicious anti-Semite, not to mention anti-LGBTQ. In 1984 he called Adolf Hitler a “very great man”; his now de-verified Twitter profile is bannered with a pinned tweet in which he boasts of “Thoroughly and completely unmasking the Satanic Jew and the Synagogue of Satan.”

Farrakhan at an event in February deemed Jews to be “the mother and father of apartheid” and “have control” over some agencies of government. He argued that Jews have induced black male homosexuality through the “weaponization” of marijuana, portraying Jews as opponents of black masculinity. Among those on hand were progressive Women’s March leader Tamika Mallory, who refused to apologize for her attendance or repudiate Farrakhan.

Clinton did not comment on sharing a stage with Farrakhan, although his daughter, Chelsea, defended him on Twitter. After condemning Farrakhan’s anti-Semitism, Chelsea argued that “Aretha’s family had every right to invite whomever they wanted to celebrate her life.”

But would the former president been as comfortable sharing a stage, if requested by the mourners of a similarly respected figure, with an unalloyed bigot like David Duke or Richard Spencer?

Several figures on the left appear to tolerate and tacitly endorse the Nation of Islam leader — an ideological inconsistency that enables anti-Semitism to be tolerated even when other forms of bias, including anti-black racism, are roundly condemned.

The Congressional Black Caucus still maintains ties with Farrakhan. According to The Daily Caller, the caucus held a secret meeting with him in 2005. Contacted recently, all 21 current members of the caucus who met the minister in 2005 declined to denounce him. Some, including Barbara Lee and Gregory Meeks, eventually did so. The popular firebrand congresswoman Maxine Waters, who has long embraced Farrakhan and still does, did not.

There may be simple calculus in this: Politicians don’t want to alienate constituents for whom Farrakhan is still a hero. And minority groups, including the Jews, are reluctant to take marching orders from the establishment about whom they should and shouldn’t condemn.

Yet for many progressives, and increasingly the left at large, anti-Semitism is fundamentally different from and less serious than anti-black racism or Islamophobia, among other forms of bias.

As I reported in early August, progressives and liberals — from Melissa Harris-Perry to Linda Sarsour — embrace a hierarchical definition of racism that places importance on power. According to this formula, only the powerful can be racist and powerful people cannot have racism wielded against them. Within this paradigm, white-on-black bias, due to the power gap, is racism; black-on-Jew bias — anti-Semitism — in which the weak attack the strong, becomes simple bias rather than racism.

Without a power gap, anti-Semitism becomes less concerning than anti-black and other racism.

“The thing I’m always worried about in the world is power, and how power is wielded in ways that cause inequity,” Harris-Perry, explaining why she declined to condemn Farrakhan, said earlier this year. “So if you can show me that Minister Farrakhan has taken his position and used his position to create inequity and inequality for Jewish people, then I will denounce that tomorrow.”

By embracing this definition of racism — and relegating anti-Semitism to some lesser form of bias — the left has enabled the continued normalization of bigots like Farrakhan within their ranks.

“If Jews are seen as ‘white’ (which, in this permutation of progressivism, they are), and ‘whites’ cannot be subjected to racist attacks, then anti-Semitism becomes a trivial concern,” K.C. Johnson, a history professor at Brooklyn College, former Fulbright instructor at Tel Aviv University and regular Washington Post contributor, told me in August.

Jews in Great Britain have had a taste of that dynamic this year amid accusations that the Labour Party has crossed the line from deeply critical of Israel to outright anti-Semitic. Jews who have cried foul over party leader Jeremy Corbyn’s cozy relationship with Palestinian terrorists and heated anti-Israel rhetoric have been told that they are both too powerful and too comfortable to have any real complaint.

“Astounding, isn’t it,” British novelist Simon Maginn tweeted in July, “that a group which claims to be silenced, oppressed, powerless manages to keep the [Labour anti-Semitism] story running day after day, week after week, month after month, in every Tory paper and on the Tory BBC. Must be terrible to be so oppressed, so silenced.”

While the Trump White House has been and should be excoriated for encouraging white supremacist and far-right groups in the pursuit of far-right votes, it goes without saying that the left should be similarly condemned for fraternizing with and continuing to legitimize Farrakhan and his ilk seemingly in the pursuit of black votes.

Of course, Aretha Franklin’s family had every right to invite whomever they saw fit to her funeral. Nobody, however, forced Clinton to appear on the stage itself. Clinton could and should have opted not to attend without a change in the dais, thereby refusing to share a stage with, and implicitly elevating, a bigot.

(Charles Dunst will soon begin as an intern reporter at Southeast Asia Globe in Phnom Penh, Cambodia. He is a former editorial fellow at the Jewish Telegraphic Agency and his writing has appeared in The Washington Post, The American Prospect and The Hill, among other publications.)