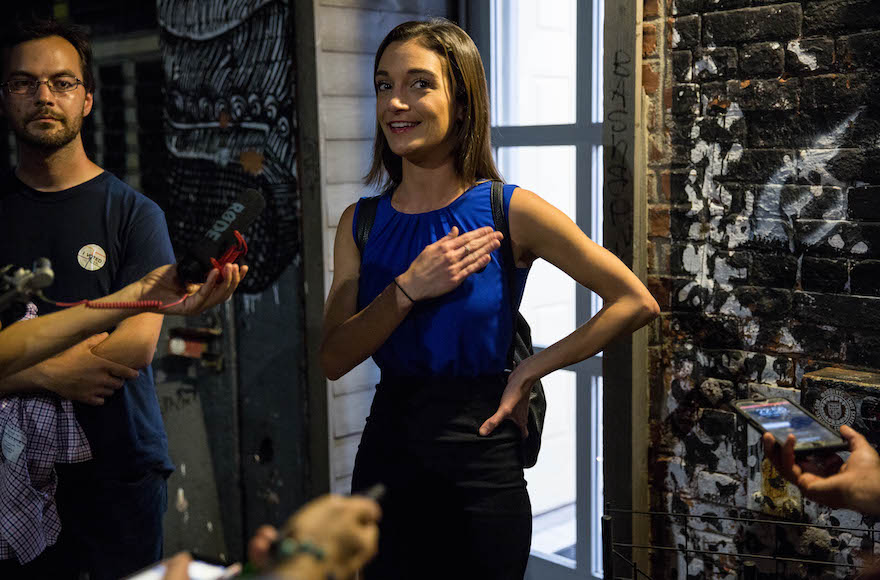 (JTA) — Julia Salazar, whose revised claims to Jewish identity raised questions and challenges in the media, won her race for a New York State Senate seat in Thursday’s Democratic primary.

Salazar’s biography came under close scrutiny when journalists uncovered evidence that she had not grown up working class, as she had claimed; that she was not an immigrant, as she had allowed campaign officials to claim without correction; and after evidence appeared to undercut her claim to Jewish roots, through her father, and Jewish identity.

She told JTA last month that she has some extended family members who are Jewish.

Family members denied knowledge of Jewish roots, and digging into her late father’s family history in Colombia showed nothing but Roman Catholic affiliations. Salazar said she had converted to Judaism while at Columbia University, and a number of friends from her university days vouched for her Jewish identity. Her account of how she converted varied, and a rabbi she named as presiding over the conversion was a Reform movement rabbinic intern at the time, New York Magazine reported. The Reform movement does not authorize rabbinic interns to carry out conversions.

Salazar also identified herself as a victim of sexual assault by David Keyes, a spokesperson for Israeli Prime Minister Benjamin Netanyahu. After being accused of sexual misconduct by a number of other women, Keyes took a leave of absence from his position while denying the charges.

The larger themes of Salazar’s campaign, including calls for rent control, resonated against her rival, whom she accused of deferring to real estate interests.

Like others in the Democratic Socialists of America party Salazar backs the boycott Israel movement.

Further up the ballot, Andrew Cuomo appears headed for a third term as New York governor after soundly defeating a Democratic primary challenge from his left.

The media called the race for Cuomo soon after polls closed at 9 p.m. Thursday, with nearly 70 percent of the vote counted. Cuomo led Cynthia Nixon, an actor best known for her role in “Sex and the City,” 66-34 percent.

Cuomo overcame the negative publicity from a former aide’s last-minute attempt to mislead Jewish voters about the Israel positions of Nixon.

On the eve of Rosh Hashanah, the Democratic Party, which is led by Cuomo, sent 7,000 Jewish homes a flier claiming Nixon was silent on anti-Semitism, that she backed the Boycott, Divestment and Sanctions movement targeting Israel, and that she opposed subsidies for Jewish education.

All of the claims were false or misleading. Newspapers reported that a former top aide to Cuomo wrote the flier and another former top aide signed off on it. Cuomo denounced the release, but Nixon and her supporters pushed back, accusing the establishment of dirty tricks. Nixon is raising her two children as Jewish. She does not back BDS, but she opposes the penalty Cuomo has imposed for compliance with the movement.

The son of a revered former governor of New York, Mario Cuomo, Andrew Cuomo is believed to be a sure bet to defeat the Republican challenger, Marc Molinaro, in November.

Also in New York state, eight members of a conservative group called the Independent Democratic Conference — reviled among Democrats for striking deals with Republicans in the State Senate — faced primary challenges. Six of them, including Jeffrey Klein, whose 34th District represents parts of the Bronx and Westchester, lost to progressives. Julie Goldberg, a teacher, mounted a strong challenge against another IDC member, David Carlucci, in the 38th District in Rockland County, northwest of New York City, but Carlucci survived.

The IDC had hastily disbanded at Cuomo’s behest in April as it appeared likely the members would face challenges from the left.

Simcha Felder, a Brooklyn Democrat who caucuses with Republicans separately from the IDC, survived a primary challenge with support from Orthodox Jewish turnout.