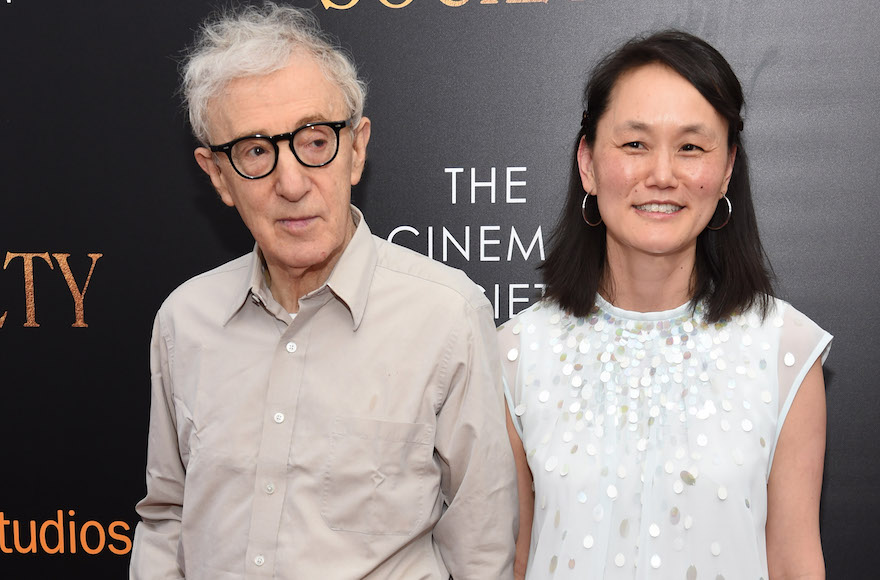 Woody Allen and Soon-Yi Previn at the premiere of "Cafe Society" at the Paris Theatre in New York, July 13, 2016. (Jamie McCarthy/Getty Images)
Advertisement

(JTA)– Soon-Yi Previn, the wife of filmmaker Woody Allen, defended her husband of 25 years against charges that he sexually abused his adopted daughter when she was 7.

“What’s happened to Woody is so upsetting, so unjust,” Previn, 47, told New York magazine in an interview published in the Sept. 17 issue and posted on the magazine’s Vulture website late last week. “[Mia] has taken advantage of the #MeToo movement and paraded Dylan as a victim. And a whole new generation is hearing about it when they shouldn’t.”

Previn is the adopted daughter of Mia Farrow and her ex-husband Andre Previn. She met Allen when the filmmaker was Farrow’s boyfriend. Allen and Farrow have a biological son and also adopted two children.

In May, in the wake of accusations by dozens of women against movie producer Harvey Weinstein and the launch of the #MeToo movement, Allen’s adopted daughter Dylan Farrow revived her accusation that the acclaimed director had molested her in Farrow’s home when she was 7 years old in 1992. Allen has denied that he ever molested his adopted daughter, and an investigation in 1993 determined that Dylan Farrow was coached to make the accusation, which she denies.

The New York article was written by Daphne Merkin, who said in the piece that she has been friends with Allen for more than 40 years. The revelation has led to accusations of bad journalism policies against the magazine.

These are the first comments that Previn has made on her relationship with Allen and the accusations against him in their years together.

Allen and Previn began their relationship in 1991, when Allen still had some kind of relationship with Farrow, and when Previn was a freshman in college studying art. They had planned to keep their relationship a secret and guessed that it would end quickly. Upon discovering the relationship, Farrow called it a virtual case of incest because of the complicated relationship between Allen and the women.

Previn said that Farrow was abusive and considered her to be “retarded,” but that she and Allen did not start a relationship to punish Farrow.

“I wasn’t the one who went after Woody — where would I get the nerve? He pursued me,” she told Merkin. “That’s why the relationship has worked: I felt valued. It’s quite flattering for me. He’s usually a meek person, and he took a big leap.”

Allen’s adopted son Moses has defended him, saying most recently in a blogpost in May that he was present when the molestation of Dylan Farrow is said to have taken place, and that no such assault occurred. His biological son Ronan Farrow, who goes by his middle name after growing up as Satchel, has defended his sister in the controversy. Ronan Farrow is the author of several groundbreaking articles in the New Yorker on high-profile men accused of sexually abusing women.

Several stars of Allen movies have repudiated him in recent months or donated their earnings from Allen films to organizations that support women who have been sexually abused or marginalized.