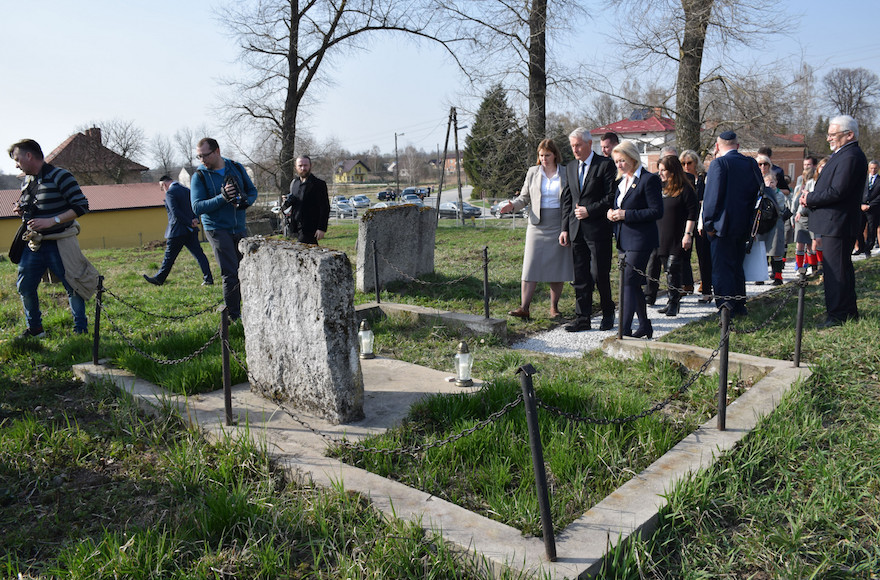 LUBLIN, Poland (JTA) — When German air force pilots took aerial photographs of western Ukraine in 1941, they did it to help Nazi Germany defeat the Soviet Union in a war that saw the genocide of 6 million Jews.

But in a twist of fate, the German government has recently started funding an effort that uses the photographs to identify and preserve Jewish cemeteries.

The effort, in which the Luftwaffe archives are only one of several ingenious tools, began in 2015 with the establishment of an organization called the European Jewish Cemeteries Initiative, or ESJF. The largest-ever international project of its kind, ESJF has since fenced more than 100 Jewish cemeteries in seven countries on a modest annual budget of approximately $1 million.

And in Eastern Europe, fencing Jewish cemeteries is “not as straightforward as it may sound,” according to Philip Carmel, a British former journalist, the organization’s CEO since its creation.

Even determining the location of such graveyards can be challenging in towns with entire Jewish populations that were murdered and cemeteries plundered for construction material and then stolen for development.

“Obviously they were taken to help the German war effort,” Carmel said of the prints and negatives that he pulled from German state archives. “But they were accurate enough to help us identify some Jewish cemeteries right before the destruction.”

In the western Ukrainian town of Buchach — the birthplace of the Jewish Nobel Prize laureate Shmuel Yosef Agnon and Nazi hunter Simon Wiesenthal — Jews for generations buried their dead atop a mound that in 1941 stood on the town’s northern margins.

But after the murder of the area’s 10,000 Jews during the Holocaust, the forest adjacent to the cemetery was allowed to swallow it up, leaving exposed only a few dozen headstones. Fragments of others used to lie in piles on the shoulders of the potholed asphalt road that snakes along Buchach’s Torgova Street.

The forest’s progression and the destruction caused to the headstones – locals throughout Eastern Europe steal them to use as sharpening stones or building material – complicated efforts to map the cemetery. The Luftwaffe aerials show its borders clearly, explained Carmel, who last year oversaw its demarcation. It is now set for fencing later this year, complete with retaining walls. 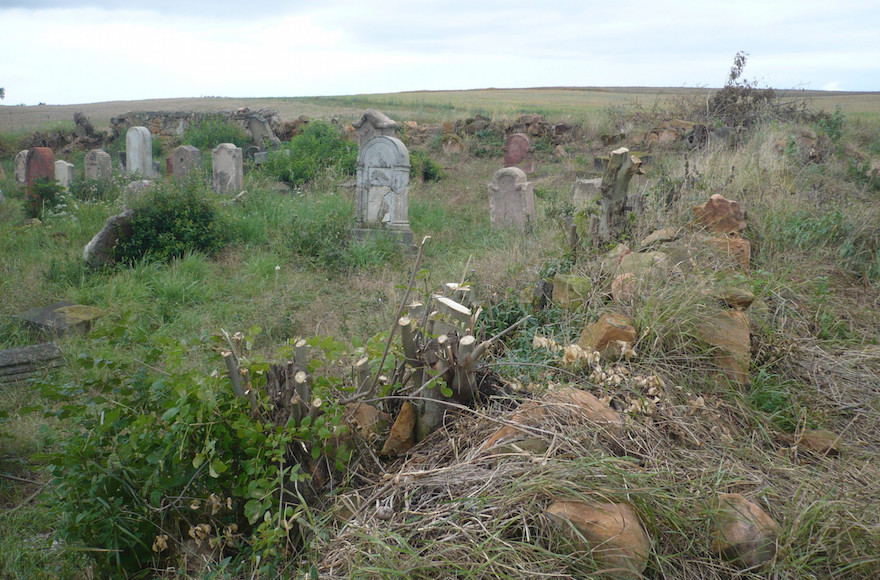 ESJF recently began using engineering drones that can map a Jewish cemetery in a fraction of the time and cost that a team of surveyors would require.

Fencing is crucial, Carmel said, because it prevents further damage. While it neither helps restore damage nor prevent people who are determined to get in from climbing the fence, “It shows ownership, it indicates interest and it vastly reduces the chance of vandalism,” he said.

Jewish communities in Eastern Europe are struggling to maintain crumbling heritage sites from an era when the local Jewish population was many times greater than it is today, as are activists working to preserve Jewish cemeteries.

But ESJF is the best-funded and first international effort of its kind, active in an area with well over 10,000 Jewish cemeteries in various degrees of risk. And it is by far the most transparent, as per stringent reporting demands by the German treasury.

Whereas the bulk of the damage to Jewish cemeteries happened during World War II and under communism, they are still being degraded today at an alarming rate due to unregulated construction and vandalism.

Earlier this month, the construction of a state-funded sports complex in the town of Klimontow, Poland, was completed atop what activists say was a disused Jewish cemetery. Last year, a judge in Belarus cleared the way for the construction of apartments atop two former Jewish cemeteries in Gomel. And in Lithuania, the government is ignoring an international outcry over its plan to build a conference center on what used to be one Vilnius’ largest cemeteries, which the communists razed.

About a quarter of all Jewish cemeteries in Eastern Europe were destroyed during the Nazi and Soviet periods, according to Rabbi Isaac Schapira, the Israel-based founder and chairman of the ESJF board.

“Most of those that have remained lie neglected principally because their communities were wiped out in the Holocaust,” he said.

This is also the reason the German government decided to bankroll ESJF, according to Carmel.

As a rule, ESJF does not get involved in cemeteries featuring a legal or territorial dispute, like the ones in Klimontow, Gomel or Vilnius.

“Our objective is to fence as many Jewish cemeteries as possible in as little time as possible for the lowest cost,” Carmel said.

Instead of duking it out with local authorities and developers, ESJF tries to find compromises.

On a recent project, ESJF even purchased a small and cheap plot of land in a small Ukrainian town so it could serve as a Christian cemetery. It was the simplest way of getting the local Orthodox church, which did not want to bury Seventh-day Adventists in its Christian cemetery, to stop burying them atop older graves at a disused Jewish cemetery, Carmel said.

When it comes to halachah, or Jewish law, ESJF is strict in observing its rules on burial, Carmel said. But whenever possible, he said, the organization tries to compromise, keeping with its view that local partnerships are the only guarantee for the organization’s long-lasting impact.

“The cemeteries we fence, they are not being guarded,” Carmel said. “Ultimately the only way of making sure these places don’t get destroyed is to get the local population to think of their local Jewish cemetery as part of their own heritage.”

One success has been in Frampol, Poland, where dozens of schoolchildren joined ESJF’s fencing and cleanup of the local Jewish cemetery.

Another is the story of Katy Kryvko, a 17-year-old high school student from the Ukraine village of Derazhne, located about 100 miles north of Buchach. Two years ago Kryvko, who is not Jewish, contacted ESJF about a Jewish cemetery behind her home that the local children used as a playground.

“I was shocked when I realized that kids are playing literally at the cemetery,” she told JTA. “I didn’t understand why it was neglected and nobody cared about it.”

Her interest in the cemetery led Kryvko to study the tragic history of the region’s Jewish population, and to ESJF, which cleaned it up and fenced it last year.

“It’s so important for me because I know that I’m the only one person who can save the cemetery,” she said. “I mean, who can take care of it.”