This is the gravest threat to the future of liberal Judaism 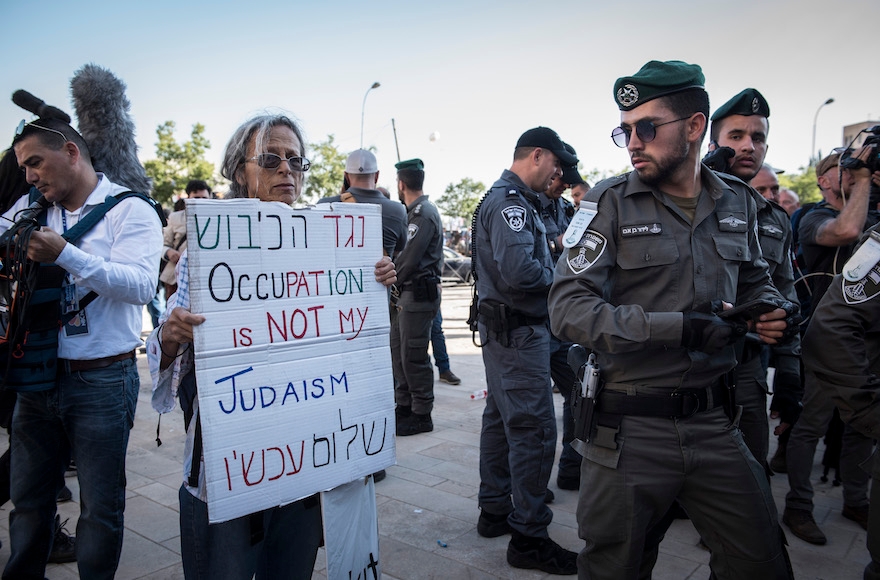 A small demonstration near the new U.S. embassy in Jerusalem on its opening day in May 2018. (Adrien Vautier/Barcroft Media via Getty Images)
Advertisement

NEW YORK (JTA) — Something is rotten in the state of liberalism that threatens the future of progressive Judaism.

Jews who call themselves “liberal” join organizations seeking to boycott, divest and sanction Israel in disproportional numbers. They lead the attack against Israel with a kind of ferocity normally reserved for the world’s worst regimes. Their antipathy for Israel leads them to join groups that even have anti-Semitic tendencies.

But the danger is not only in the political realm. Like everything else in life, our actions – our politics – are dictated by our core values and principles. Many liberal Jews are uncomfortable with Jewish particularism, asserting that it is an illiberal idea whose time has passed. While there was always a healthy tension in Jewish thought between the centrality of Jewish peoplehood and Jewish interactions with, and obligations to, the world at large, it is increasingly difficult for liberal Jews today to accept that Jewish distinctiveness is a core Jewish value or even a contemporary social good.

Thus, liberal Jews are abandoning their Jewish identity in accelerating and unsustainable numbers. According to a Pew study published in August, nearly half of American Jews prefer not to identify with organized religion. Their distancing from the Jewish community has already caused a significant contraction of our movement and, if not contained, will cause an implosion of the instrumentalities of Reform Judaism itself. If we do not reverse these trends, Reform Judaism two generations from now will be a shadow of what it is today.

Pulitzer Prize winner Michael Chabon’s commencement address last spring at the Hebrew Union College-Jewish Institute of Religion addressed these issues directly. Before a sanctuary filled with newly minted or soon-to-be Reform rabbis, cantors, educators and other Jewish professionals and their families, Chabon told these future leaders of Reform Judaism that since the last of his children’s b’nai mitzvah, his retreat from religious practice has been near total. He contended that Judaism, like every other religion, is one giant interlocking system of division intended to enforce the division between, among other things, Jews and non-Jews.

Chabon touched upon the very heart of Jewish distinctiveness and peoplehood.

Such is the wounded state of Jewish liberalism today that in response, Chabon received a rousing ovation from most (but not all) of the crowd of students about to embark on their first full-time positions in Reform synagogues, supported by many of their professional mentors.

Under what theory of liberalism are we required to discard attachments and loyalties to Jews? What is this new Jewish progressivism that asserts that the acceptance of others requires the negation of self? Is a marriage between two Catholics, Hindus, Muslims or Universalists illiberal? Is a marriage between two indigenous Australians, eager to preserve Aboriginal civilization, illiberal?

To care about fellow Jews, to feel connected to the Jewish people and to be attached to the Jewish state are not proof of ghetto Judaism. In fact, not to be committed to these values is evidence of Jewish decline.

We liberal Jews never seem to speak about Jewish solidarity anymore. We speak about our obligations to the world with profound conviction and eloquence, but never seem to speak about our obligations to Jews. Thus, for many Reform Jews, “tikkun olam” implies everyone in the world except Jews. It is rare to meet an American Reform youth or activist who considers tikkun olam to include the obligation to assist, say, impoverished Jews in Israel or the former Soviet Union. A Reform tikkun olam mission would more likely travel to a poor African village than a soup kitchen for Jews in Ukraine.

The irony is that the very concept of prophetic values emerged from the Hebrew prophets, who were fierce particularists. At no time did they abandon the Jewish particular in favor of the universal. To the contrary, the universal was a function – a product – of the particular. The impetus and urgency of prophetic morality was an outcome of the centrality of the Jewish people, not its negation.

The growing inclination among liberal Jews to de-emphasize Jewish distinctiveness is the gravest threat to the future of liberal Judaism. For what are the prospects of the continuity of the people if the people are not committed to its own continuity – and does not even agree philosophically that it is a legitimate objective and a social good? Is it possible to sustain the Jewish people without being committed to the Jewish people? Can Judaism survive without Jews?

In the modern world, those who are not committed to Jewish survival will not survive as Jews.

(Ammiel Hirsch is the senior rabbi at Stephen Wise Free Synagogue, a Reform congregation on New York’s Upper West Side. This op-ed is adapted from his 2018 Yom Kippur sermon, “From the Ghetto.”)