I tested positive for the cancer-causing BRCA mutation. Now what? 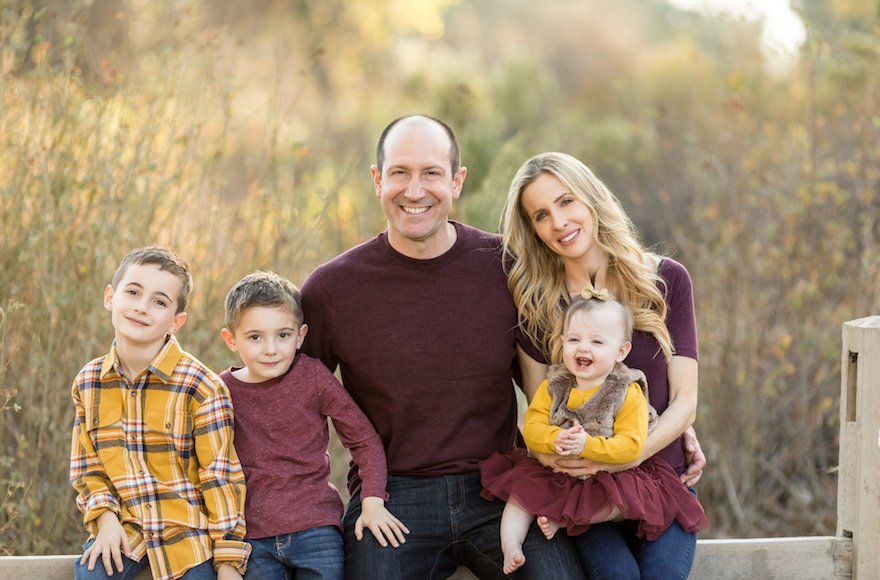 Laura Osman is shown with her husband Lawrence Osman and their children Levi (in yellow plaid shirt), Teddy and Molly. (Courtesy of Laura Osman)
Advertisement

ENCINO, Calif. (JTA) — Curiosity about my ancestry spurred me to order an at-home genetic testing kit by mail earlier this year. Maybe my blonde hair was a result of some hidden Swedish genes?

When the kit arrived, I quickly spit in the tube and sent it off, not giving any thought to the genetic and ancestry testing boxes I checked off. Although I just went through a rigorous prenatal genetic testing process while pregnant with my third child less than two years earlier, I figured the small price difference to do more genetic testing could be worthwhile.

Several weeks later, an ordinary morning sipping coffee would become extraordinary. Quickly scrolling my phone, I clicked on my available testing report from the testing kit. First came my ancestry: 99.9 percent Ashkenazi Jewish. As I kept scrolling, my heart stopped as I saw BRCA1 POSITIVE. CONSULT WITH DOCTOR.

This is a mistake, I thought. No one in my family, men or women, have had breast or ovarian cancer. Shaken, yet hopeful of a lab error, I called my ob/gyn and explained the situation. That afternoon I was sitting in her office awaiting a medical grade test, the gold standard in BRCA testing.

Seven days later I received the call confirming my nightmare: I indeed was BRCA1 positive.

My initial shock and anger were replaced with a paralyzing fear that I already had developed cancer. Women carrying the BRCA mutation begin advanced screenings starting at age 25, and here I was at 37 never having had a mammogram or ovarian cancer screening. With the BRCA1 mutation, I faced an up to 88 percent lifetime risk of developing breast cancer and a 45 percent  lifetime risk of ovarian cancer. My body, which I pushed to the limit as a track and cross country All-American in college, was a ticking time bomb.

Immediately I knew that feeling sorry for myself was not a productive option. When my breast and ovarian cancer screening (CA125 and a pelvic ultrasound) came back clear, I breathed a momentary sigh of relief, realizing how lucky I was to catch this. Then I moved quickly to a plan of action.

Five weeks after receiving the initial email from my at-home genetic testing company, I underwent my first surgery: a laparoscopic tube and ovary removal with my incredibly knowledgeable doctor at a major Los Angeles hospital. Eleven days later, my doctor laughed when I showed up to my post-op checkup anxiously awaiting to be cleared for exercise in my running shorts. Although I was hobbling and out of breath on that first run back, I was also smiling knowing I had significantly reduced my risk of ovarian cancer.

Next I had to tackle the surgery that scared me the most. A double mastectomy is not only physically difficult but emotionally loaded. Instead of ignoring my fears, I began open conversations about my emotions, the pain and recovery, and how it could potentially change my relationship with running. I reached out to Sharsheret, the national Jewish not-for-profit organization that supports women and families facing or at high risk for breast and ovarian cancer. Sharsheret’s Peer Support Network is a confidential program that connects women one on one with others who share similar diagnoses, treatments, family constellations and experiences.

Beyond the peers, Sharsheret has a team of skilled and sensitive social workers and a genetic counselor who speak to thousands of women like me, helping us to cope, and stay strong and resilient while making very tough decisions about our bodies, our health and our future.

Without regret, I chose to preventatively remove both healthy breasts. On July 26, I underwent a nipple-sparing bilateral mastectomy with immediate direct-to-implant reconstruction. Although the initial recovery was filled with some dark moments, each week I gained strength and was surrounded by an army of support, which undoubtedly helped me heal both physically and mentally. Now, 12 weeks past my surgery date, I am back to my eight-mile runs and chasing around three small kids. As I set out running, I am so grateful to be strong, healthy and pain-free. Each step is a reminder of how lucky I am to have caught my BRCA mutation before it was too late.

When I look at my body today, it is not a terrible reminder of my genetic mutation, but rather a beautiful result of finding a team of supportive surgeons who believe you do not have to sacrifice aesthetics to prevent cancer.

The final piece to my puzzle was finding the origins of my BRCA1 mutation. As it turns out, my father carries the BRCA gene. Although male carriers are at increased risk for prostate cancer, the mutation often goes undetected in men, as it did in my father, who had prostate cancer. A common misconception is that women cannot inherit BRCA from their fathers. Because no women in my family had breast or ovarian cancer, the possibility that I carried BRCA flew under the radar.

All Ashkenazi Jewish women and men carry a one-in-40 risk of carrying a BRCA mutation as compared to one-in-500 chance in the general population. October may be Breast Cancer Awareness Month, but all year round, Jewish women and men everywhere need to ask more questions about their family genetic history on both their paternal and maternal sides. It is time for us to begin conversations with our doctors even when they may not initiate them with us. We need to be educated, and to raise awareness about how BRCA and other genetic mutations such as CHEK2 and PALB2 can be passed down from both parents. Stopping cancer before it stops us is now often in our hands. While prophylactic surgery might not be the right choice for every woman, knowing our risk and understanding our options will empower us to take control of our bodies and our lives, and will enable us to make informed and potentially life-saving decisions.

In the U.S., the average woman has a 12 percent chance of developing breast cancer and a 1 to 2 percent chance of developing ovarian cancer. But certain genetic mutations such as BRCA1 and BRCA2 can increase those lifetime risks to up to 88 percent and 45 percent respectively, according to studies published in the Journal of the American Medical Association. These mutations are found in Ashkenazi Jews 10 times more frequently than in the general population. At least 50 percent of hereditary breast cancer is related to genes we don’t know how to look for yet.

At-home genetic testing companies may offer tests for three such mutations most commonly found in those of Ashkenazi descent, making it much easier for them to get tested. It’s important to note that anyone who takes an at-home genetic test should first and foremost get tested by a medical provider and also consult a genetic counselor to discuss their results and help them navigate next steps.

Now that my cancer journey is behind me, I want to pay it forward and help. That’s why I am sharing my story so publicly — so that other men and women understand how learning their own cancer genetic profile can save their lives, and to give a “face” to those who inherit the BRCA mutation from their fathers.