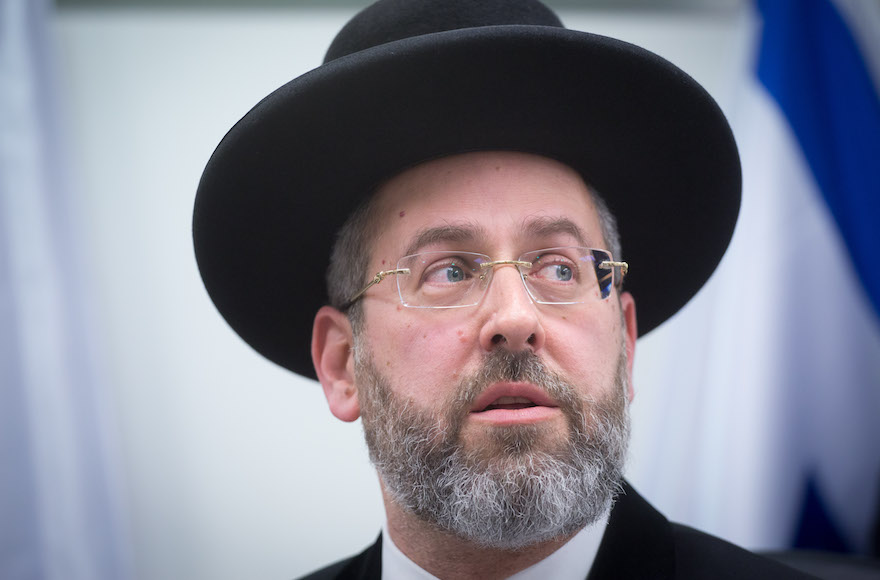 Israel's Ashkenazi Chief Rabbi David Lau attends the traditional selling of the the hametz (food containing leavening) of the state of Israel to Arab Israeli Mr Jaber (unseen) before the upcoming Passover holiday, on March 29, 2018. Photo by Miriam Alster/Flash90
Advertisement

(JTA) — Israel’s Chief Rabbinate may deserve a lot of the criticism it gets from non-Orthodox Jews in this country, who see their official expressions of Judaism disrespected and their followers disenfranchised by the rabbinate’s tight hold on Israel’s religious affairs.

But it appears that Ashkenazi Chief Rabbi David Lau did not deserve headlines, including one in JTA, suggesting that he refused to identify the site of the deadly shooting in Pittsburgh as a “synagogue.”

In fact, according to a translation of his full interview with the Israeli newspaper Makor Rishon, Lau did use the Hebrew word for a synagogue — “beit knesset” — to refer to synagogues like Tree of Life Congregation in Pittsburgh, and at the same time offered a full-throated, and even perturbed, dismissal of those who would make such petty distinctions at a time of tragedy.

The original story made its way from Makor Rishon to the Israeli daily Haaretz to a report in The Washington Post. Our report on the issue referenced The Washington Post story, so I’ll quote from that: “In an interview with Makor Rishon, a newspaper aimed at the Modern Orthodox community, the country’s Ashkenazi chief rabbi, David Lau, referred to Tree of Life synagogue as ‘a place with a profound Jewish flavor.'” Both Lau and Sephardi  Chief Rabbi Yitzhak Yosef, the Post explained, “stopped short of recognizing that it took place in a synagogue.”

That sort of slight is profoundly hurtful to non-Orthodox Jews. Over the years, Israel’s haredi Orthodox-run establishment and media rarely or never refer to their rabbis as rabbis and its synagogues as synagogues. It is a rhetorical insult that reflects the indignities that Reform and Conservative rabbis and lay leaders, representing the majority of affiliated Diaspora Jews, face in their campaign to be fully and legally recognized in the Jewish state. We noted that Lau’s remarks “fueled a debate” over pluralism in Israel.

According to the full interview with Lau, however, he appeared at pains to separate the Pittsburgh tragedy from that ongoing controversy. In response to the interviewer’s question about the fact that the site of the shooting was a Conservative synagogue, Lau said, heatedly, “What bearing does that have on this? That is irrelevant. We are talking about Jews who were killed just for being Jews. What is the question? There is nothing to discuss about their affiliation. They were killed because they were Jews! Does it matter in which synagogue they pray in or what text they use?”

(In Hebrew, the last phrase is “Zeh m’shaneh b’eizeh beit knesset o nusach hem mitpalelim?” Beit knesset, or “house of assembly,” is the standard Hebrew word for a synagogue.)

Lau continued in this impassioned vein after the interviewer noted that the haredi media won’t use “synagogue” to refer to a Reform or Conservative house of worship. Lau said he doesn’t speak for the haredi media, and that he often disagrees with what they do and write.

Then he added: “I repeat and say: We are speaking about Jews and we need to not take advantage of the situation to raise our painful differences. I have an ideological dispute with them about Judaism, about the past and the future of the Jewish people throughout the generations.” He then said, rhetorically, “But because of this they are not Jewish?”

As for the “a place with a profound Jewish flavor” quote, here is the context. The reporter asked, “Is it a synagogue?” Lau replied, “Jews were murdered because the murderer considered the place that he killed them in to have a distinctive Jewish flavor.” The phrase in Hebrew is “makom im sameman yehudi bolet.” The Hebrew word “bolet” is hard to translate, but means something that stands out, literally or figuratively. “Sameman” is flavor in the sense of a characteristic.

Lau added: “It is a place where there are Torah scrolls and there were Jews with prayer shawls and prayer books. The people came there to become closer to God. It is for that reason that the murderer came there to kill them in their place and not another place. That is what makes this event especially painful and particularly emotional.”

Some, including Avital Chizhik-Goldschmidt, an editor at the Forward, have argued that far from avoiding the term “synagogue,” Lau was specifically addressing the topic in a way most likely to sway his haredi Orthodox followers.

“Lau was using a classic, emotional description of a synagogue, a description that he knew would resonate with his readers,” Chizhik-Goldschmidt wrote. “He depicted a synagogue scene in detail, so Orthodox readers would relate to it beyond denominational differences.”

As for his Sephardi counterpart, Yosef chose a formula that avoids the word “synagogue,” but his statement clearly embraces the Pittsburgh victims as fellow Jews.

“I was shocked to hear about the murder of innocent Jews in Pittsburgh, Pennsylvania, simply because they were Jews, by an abhorrent murderer who was driven by anti-Semitic hatred,” he said in a statement. “My heart is with the bereaved families and with all of our Jewish brothers and sisters who live in the U.S.”

None of this puts to rest the ongoing conflict between non-Orthodox Jews in America and the Chief Rabbinate. Nor am I suggesting that the legal challenges and religious activism will not, or should not, resume in earnest once the tragedy of Pittsburgh is fully absorbed and its dead appropriately honored.

But this does appear to have been a moment of one Jew feeling, and appropriately expressing, profound pain for another. That’s something to build on.