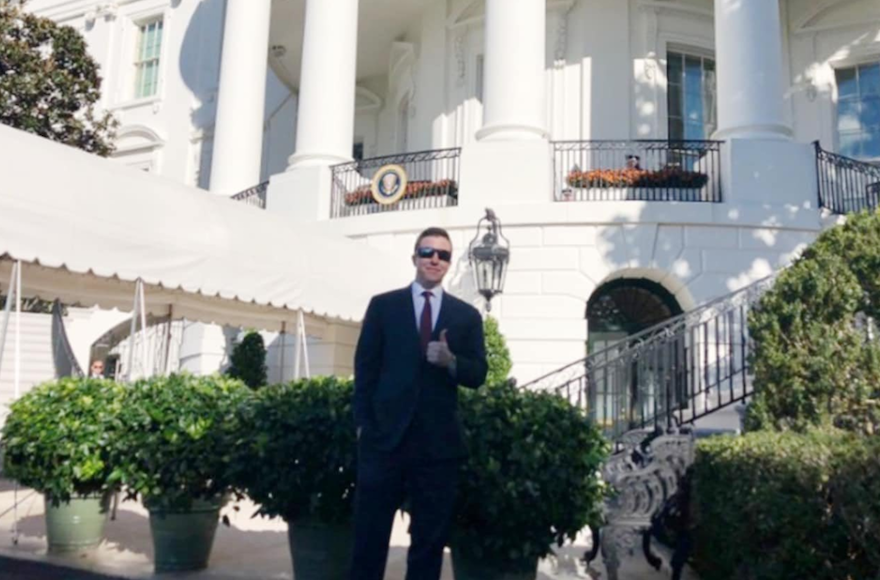 Patrick Casey, who leads Identity Evropa, posted photos Wednesday on Twitter of him posing on the White House grounds.

“Evropa has landed at the White House!” he said.

Sarah Sanders, the White House spokeswoman, told JTA in an email: “He was one of more than twenty-five thousand people who came to the White House Fall Garden Tour, which is open to the public. Free tickets are made available to anyone who wants to attend.”

Identity Evropa coined the phrase “You will not replace us,” which refers to a conspiracy theory that Jews are masterminding a plan to replace whites with non-whites.

Identity Evropa participated in the neo-Nazi march in Charlottesville, Virginia, in August 2017 that ended with violence and a deadly attack on counterprotesters allegedly carried out by a white supremacist. During that march, the Identity Evropa slogan was echoed in the phrase “Jews will not replace us.”

President Donald Trump equivocated on condemning the march, blaming both sides for the violence and saying that both the marchers and the counterprotesters included “fine people.” White supremacists and neo-Nazis praised Trump for his reaction. An array of Jewish groups and lawmakers from both parties criticized him.

“The White House should be #NoPlaceForHate,” Greenblatt said on Twitter.