My day job is translating from Jewish to English. Gevalt! 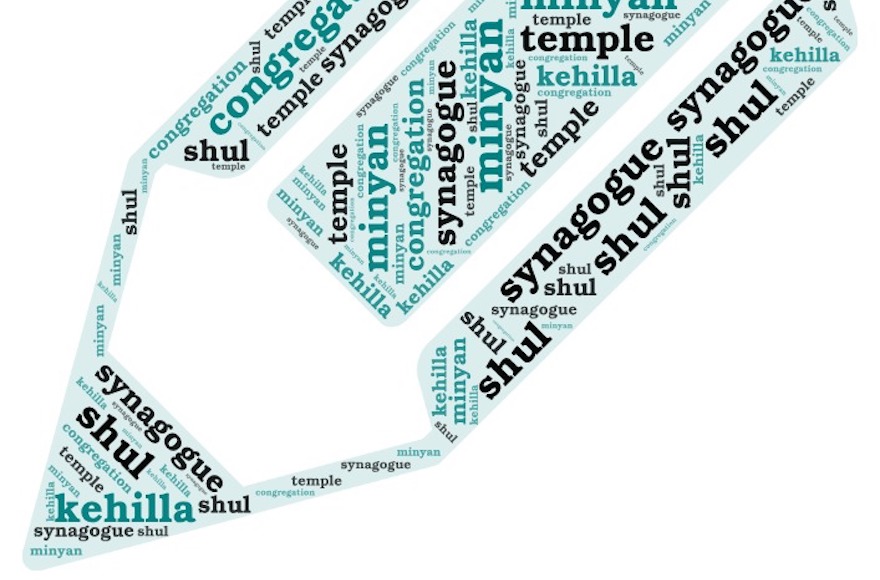 (JTA) — Do you go to shul, temple, synagogue, minyan or just services?

Let me ask it another way: That synagogue you won’t set foot in — Do you call it a shul, temple, synagogue, minyan or services?

I’m not being judgy. It’s a question about language.

Working at a Jewish news service, we often discuss the vocabulary of our English-speaking readers. And as a specialty news service, we also ask how specialized we should be. When you write a lot about religion and Israel there is a lot of distinct vocabulary, usually loan words from the Hebrew and Yiddish.

And even English words have distinct Jewish uses. A sentence like this, “The mission will explore modalities of engagement to promote continuity,” can be translated as “We’re going to Israel to look at ways to keep people interested enough in Judaism so they don’t marry gentiles.”

The question we ask frequently is how “insidery” we should be. Is it confusing or alienating to refer to a synagogue as a shul on first reference? If we mention a shiva, do we need to explain that it is the seven-day period of mourning observed by Jews after a burial?

One camp worries that too much untranslated and unexplained specialty language is just one more barrier to readers accessing not just JTA but Jewish life as a whole. A headline like “Conservatives offer grants for new minyans,” from 2008, may be perfectly decipherable for insiders, but may not mean much even to those who know that a minyan is a prayer quorum of 10 Jews. In the context of the headline, “minyan” actually means a congregation that meets independently of a synagogue. (And while we’re at it, “conservative” means the Conservative movement, which is, confusingly, one of the “liberal” Jewish denominations.)

There is another camp, of which I may be the sole member, that believes a little insidery-ness is good for the JTA brand — and the reader. Our camp worries that if you go too far out of the way to avoid the language as it is used by engaged Jews, you signal to readers a naivete about your subject matter.

Readers of sports blogs and tech sites, for example, expect a little specialized vocabulary as part of their reading diet. A sentence like “deGrom’s major league-leading 1.70 ERA was two-thirds of a run lower than the next closest NL hurler” isn’t exactly Sanskrit, but it does assume — and reward — a little prior knowledge. The old Spy magazine used to have a regular feature making fun of The New York Times for overexplaining things to its readers, as in “The Beatles, the popular rock and roll band of the late 1960s …”

Last week we had an office debate over a headline for an article about the scholar Robert Alter, who had just finished his three-volume translation of the Hebrew Bible. His name appeared in the original headline, leading some on staff to complain that no one would know who he is. In the age of search engines and social media, they correctly argue, you need headlines that are immediately accessible to the greatest number of potential readers. That argues for something like “After three decades, a scholar completes a monumental translation of the Bible.”

But I argued to keep his name in the headline, since leaving it out might suggest that we didn’t understand Alter’s place in the Jewish literary firmament. It was the difference, I argued, between using “Jacob deGrom” and “Mets pitcher” in a headline at ESPN: The reader who would most value the information would recognize the name, and everyone else would, I don’t know, figure it out.

I won the Alter argument (mostly, I suspect, because I managed to exhaust the opposition), and had some vindication Monday night when I attended a discussion at the New York Public Library with the legendary New Yorker writer John McPhee. Now 87, McPhee has made a career writing popular magazine articles and books about highly specialized subjects: geology, ecology, nuclear energy, sports. At Monday’s event McPhee’s interviewer, Paul Holdengraber, read a letter from McPhee to his late editor at the New York Review of Books, Robert Silvers. In it McPhee argues for the specialized vocabulary in one of his geology essays. Silvers apparently worried that the particular jargon of geology — anticlines, synclines, migmatite, terrane — would be a turnoff for general readers. McPhee argued, at length, that readers would figure the words out in context, or could reach for a dictionary. Explaining each word would hobble the prose, and omitting them would mean losing credibility in the science community.

But McPhee is also aware of the limits of insidery-ness. On Monday and in his recent how-to book “Draft No. 4,” McPhee said that writers can’t assume that they share “frames of reference” with their readers. He points out how young people haven’t heard of once-household names like Elizabeth Taylor and Cassius Clay.

“[C]ollective vocabulary and common points of reference are not only dwindling now but have been for centuries,” he wrote.

Sarah Bunin Benor, a scholar of Jewish language at Hebrew Union College-Jewish Institute of Religion, once used our archive to note the changing use of Jewish vocabulary at JTA and the Jewish community in general. Her study found, paradoxically, that the use of certain Hebrew and Yiddish words — such as shul, daven and chutzpah — actually increased even as the American Jewish community itself became more assimilated. (A JTA dispatch from 1924, by contrast, described a synagogue’s contents as the “Ark of the Law, the Scrolls of the Law, the Reader’s desk, and the seats” — not a Hebrew or Yiddish term among them.)

Benor also demonstrated how the Reform movement became increasingly comfortable with a Hebrew vocabulary, with words like mitzvot (commandments, good deeds), aliyah (immigration to Israel) and tikkun olam (social action) appearing more frequently in its documents. The changes suggest that “three generations after the mass wave of immigration, Jews felt comfortable enough in America to express more distinctiveness in their in-group language,” she wrote.

How much of that distinctiveness should be expressed by a Jewish news service — or, for that matter, by a synagogue rabbi, a Hillel director or a Jewish novelist?

The trick is hitting on a vocabulary that flatters the intelligence of readers without leaving them behind or on the outside. In fact, that should probably be the guiding principle of any Jewish organization or service looking to “engage” young or disaffected people. And it is up to the “engagers” to keep up on the fluidity of frames of reference and note how the collective vocabulary keeps changing.