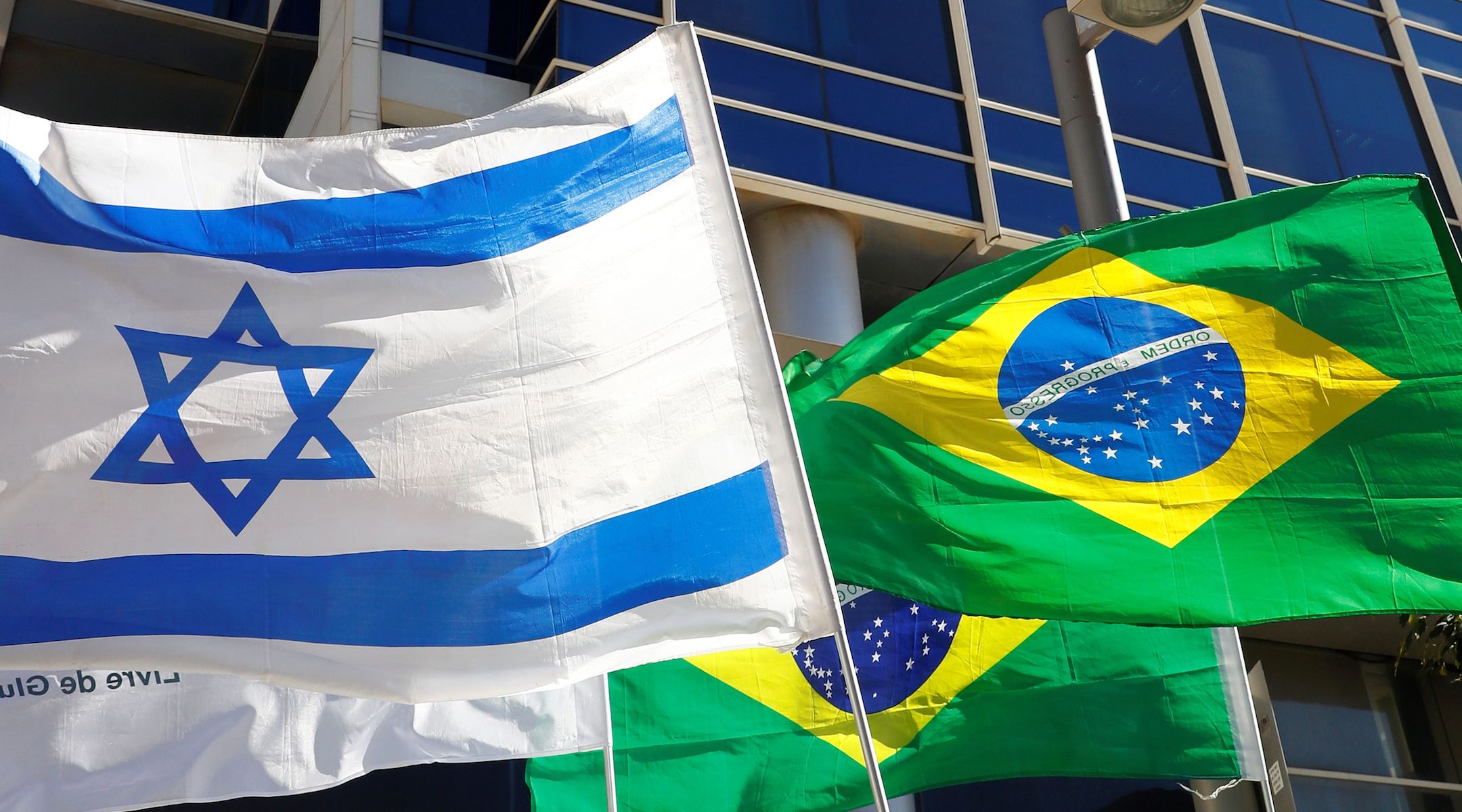 Netanyahu’s five-day visit, which is scheduled to start on Dec. 27, will mark the end of nearly 15 years of tensions between Jerusalem and Brasilia, which had reached a nadir in 2014, when a senior Israeli diplomat called Brazil a “diplomatic dwarf” in response to the Latin American country’s decision to recall its ambassador to protest Israel’s attack on Hamas during that summer’s Gaza war.

Brazil is “not just another country. It’s a country with nearly a quarter of a billion people, a superpower. And they’re changing their relations with Israel from one extreme to the other, including on the issue of Jerusalem,” Netanyahu told members of his ruling Likud party in the Knesset on Monday.

“This visit is unique, historical, a turnover in the relationship between Israel and Brazil. It’s a great start of year 2019,” Israeli Ambassador to Brazil Yossi Shelley, told JTA over the phone from Jerusalem on Sunday, where he attended a conference of ambassadors from Latin America, Asia and Africa.

Bolsanaro is a highly divisive figure among Brazilian Jews due to his ardently pro-Israel positions, on one hand, and history of racist and homophobic statements, on the other. In November, his son was reported to have told Trump adviser and son-in-law Jared Kushner that he would move the Brazilian embassy to Jerusalem, prompting enthusiastic praise from Netanyahu.

“Brazilians have elected a new president in free and fair elections. The process has split and polarized the Brazilian society, including our very diverse Jewish community,” Fernando Lottenberg, the president of the Brazilian Israelite Confederation, told JTA last month. “Now is time to reunite, based on our Jewish and democratic values of justice and tolerance.”

“Brazil’s former governments were not so nice to Israel, especially in regard to the Arab conflict,” Shelley added. “Israel has a lot of problems with leaders, never with peoples. We like to visit friends. Bibi’s coming to Brazil sets a new stage and a new era to start between Israel and Brazil.”

Shelley’s own nomination came after an unprecedented diplomatic standoff in 2016 when the Brazilian government refused to acknowledge Netanyahu’s previous pick for envoy, the pro-settlement activist Dani Dayan. Dayan was later assigned to the consulate in New York. 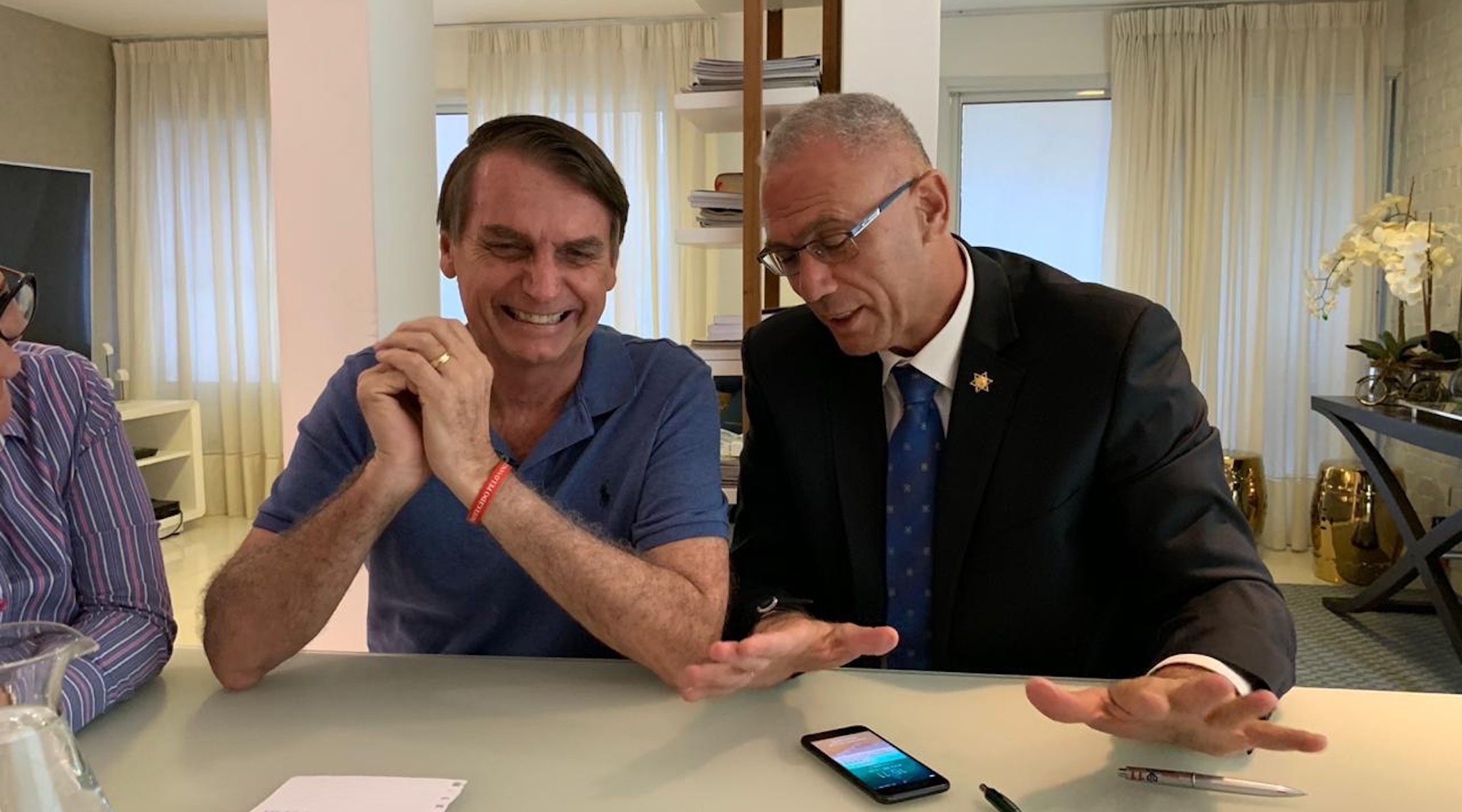 Netanyahu has worked hard to strengthen relations with many emergent figures on the nationalist right. Bolsonaro, sometime’s referred to as Brazil’s Trump, is an ultra-conservative populist who has praised his country’s former military dictatorship and, like Trump, threatened to use the power of the state against his political opponents.

Immediately after the election, Bolsonaro began to take steps to indicate his desire for closer relations with Jerusalem. Israeli Ambassador Shelley was the very first diplomat welcomed by the president-elect less than 24 hours after his electoral victory.

“Bolsonaro stood out among the many candidates for including the State of Israel in the major speeches he made during the campaign. He is a lover of the people and the State of Israel,” said Israel’s honorary consul in Rio, Osias Wurman, who also joined the private meeting.

In September 2017, Netanyahu spent several days in Latin America visiting Argentina, Colombia and Mexico but did not come to Brazil. When David Ben-Gurion traveled to Latin America’s biggest country in 1969, he was no longer Prime Minister. Surprising to some is the fact that Netanyahu will not visit Sao Paulo, Brazil’s largest city and home to half of Brazil’s Jewish community. Brazil is home to a 120,000-strong Jewish community, half living in Sao Paulo. The embassy in Brasilia and the Sao Paulo consulate have been Israel’s only diplomatic institutions in Brazil since the Rio de Janeiro consulate was closed several years ago. Israel has honorary consuls in Rio and Belo Horizonte.

Brazil played a crucial role in the creation of the State of Israel. The late Brazilian diplomat Oswaldo Aranha presided over the U.N. General Assembly vote held on Nov. 29, 1947 and heavily lobbied for the majority in favor of the resolution that partitioned the British Mandate of Palestine into two states, Jewish and Arab. For his efforts, he was nominated for the Nobel Peace Prize in 1948.

“Oswaldo Aranha is regarded by the Jewish people as the great craftsman of the fulfillment of our millennial dream of 2,000 years: the state of Israel,” Wurman told JTA last year during the celebration of Israel’s 70th anniversary.

In 2017, a record 700 Brazilian Jews moved to Israel, according to The Jewish Agency, most of them seeking a better quality of life, fleeing urban violence and impoverishment. That’s more than three times the annual average of about 200 new Brazilian immigrants and a 45-year record for the South American country.