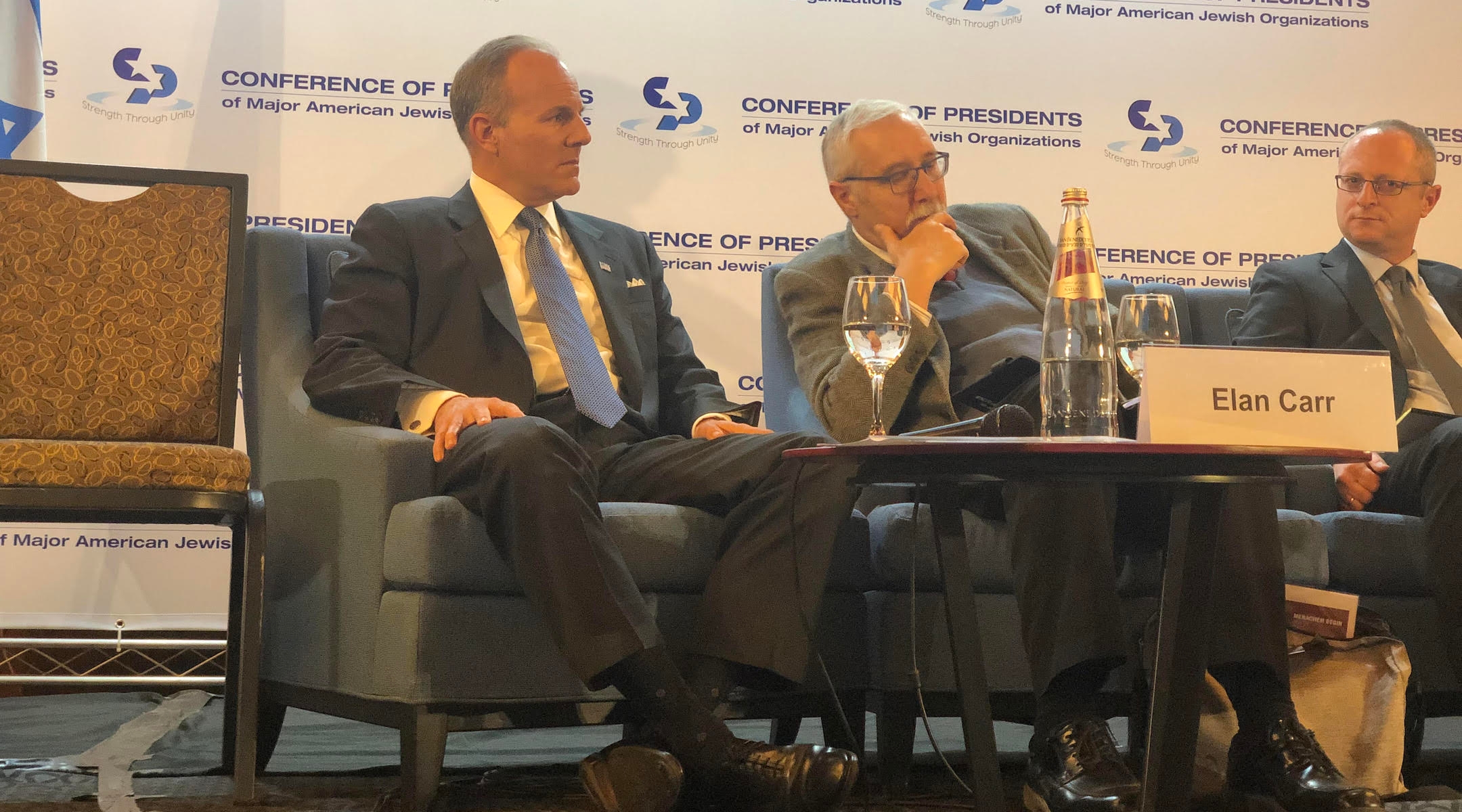 Elan Carr, left, the U.S. State Department's new envoy on anti-Semitism, speaks to delegates of the Conference of Presidents of Major American Jewish Organization in Jerusalem, Feb. 21, 2019. To his left are Gerald Steinberg, president of NGO Monitor, and Ron Brummer of Israel's Ministry of Strategic Affairs. (Sam Sokol)
Advertisement

JERUSALEM (JTA) — The State Department’s new envoy on anti-Semitism addressed American Jewish leaders gathered for a conference here, and praised President Donald Trump for his commitment to fighting that bias.

Elan Carr appeared to charm delegates of the Conference of Presidents of Major American Jewish Organizations, who hosted the envoy Thursday toward the end of their annual four-day trip here.

But a number of leaders remained skeptical of Trump and his commitment to battling anti-Semitism, despite the vigorous applause Carr received when he spoke of the administration’s recognition of Jerusalem as Israel’s capital and declared that anti-Zionism is a form of contemporary anti-Semitism. Trump remains divisive in the wider Jewish community, earning praise for his support of Israel and opprobrium for rhetoric that his critics say has stoked racism.

Carr, 50, a Hebrew-speaking former Los Angeles prosecutor who served with the U.S. Army in Iraq, was named as the special envoy for monitoring and combating anti-Semitism earlier this month. The post, which was held by Ira Forman under President Barack Obama, had sat empty for the first two years of the Trump presidency despite protests from lawmakers and Jewish groups.

“My office was created by law and designed to protect the Jewish people throughout the world. Think about that,” Carr said Thursday. “The world’s greatest power is focused, by law and design, on protecting the Jews. It’s something not to be taken for granted.”

Carr declared that the president “could not be more passionate about the issue” of fighting anti-Semitism and had “spent considerable time speaking about anti-Semitism in his State of the Union address.”

In the Feb. 5 address, Trump referred to anti-Semitism as a “vile poison” and a “venomous creed,” and introduced survivors of the October shooting at a Pittsburgh synagogue.

Carr, who was in Israel to meet with government officials and members of civil society, also praised Secretary of State Mike Pompeo, saying that Pompeo “couldn’t be more determined” to wipe out the “disease” of Jew hatred.

“Pompeo speaks about this at every opportunity and is passionate about it,” Carr said. “It’s the business of this administration and of the United States to fight anti-Semitism.”

Carr was adamant that the White House would “not ignore any part of the ideological spectrum” and would go after anti-Semitism “regardless of the ideological clothing in which it dresses itself,” from ultranationalism on the right to left-wing anti-Zionism. Some Jewish groups belonging to the Presidents Conference, an umbrella representing a range of political ideologies, have been concerned that a Department of Homeland Security program on countering violent extremism was shifted during the Trump administration to focus solely on Muslim extremism and not white nationalism.

Among the threats Carr cited were traditional forms of anti-Semitism such as “statements of government officials who call us internationalist outsiders who subvert society” and attacks by those who say that Jewish advocacy for immigrants is a threat to America. The gunman charged in the Pittsburgh shooting was reported to have railed against Jewish support for immigrants’ rights.

“Anti-Semitism is a human sickness and rots to the core every society that embraces it,” Carr said.

Several high-profile American Jewish leaders who attended Carr’s speech lauded the new envoy even as they expressed reservations regarding the president who appointed him. Given the sensitivity of the matter, none of them agreed to speak on the record.

“You have to give credit where credit is due,” one prominent figure told the Jewish Telegraphic Agency. “We can be critical and we should be, and we need to be critical, but when we can give credit to an administration and its appointed official we should be able to do so. This is a good appointment and the Jewish community has and will support it. It’s unfortunate it took two years to do it.”

One well-known national Jewish official, speaking of Carr’s relatively late appointment, told JTA that the early days of the Trump administration were marked by a degree of chaos that saw very few positions being filled. He pointed out that there are still countries to which the United States has not sent ambassadors. Moreover, he said, Pompeo made the issue a priority, as opposed to his predecessor, Rex Tillerson, Trump’s first secretary of state.

The Jewish official, intimating inside knowledge of the matter, also said that another candidate had strung along the State Department for a number of months before backing out and forcing it to relaunch the process.

In June 2017, Tillerson appeared to question the need for an anti-Semitism envoy — a position mandated by Congress —  saying the fight against anti-Semitism may be more effective without one.

Another Jewish official in praising Carr said he had many fans in the organized Jewish community, but reservations remained regarding the Trump administration’s approach.

“He’s a decorated veteran, a committed Jewish leader and a real mensch,” the official said. “However, many of us are very concerned about Carr’s appointment being used as a diversion to excuse or distract from over two years of President Trump’s anti-Semitic dog whistles. I hope this is the start of something new. Carr and Trump will need to prove that there is a new attitude across the board before we kiss their rings.”

Asked about the concerns regarding the long hiatus between anti-Semitism envoys, Carr said he believed that there were “a number of reasons.”

“There were a number of candidates that were looked at and a number of internal adjustments at the State Department that Secretary Tillerson made, and then when Secretary Pompeo came aboard he’s made this a huge focus of his,” Carr told JTA. “I just couldn’t be more impressed with his determination and I’m thrilled that I was chosen to carry the banner of the United States while fighting for the safety of the Jewish people.”