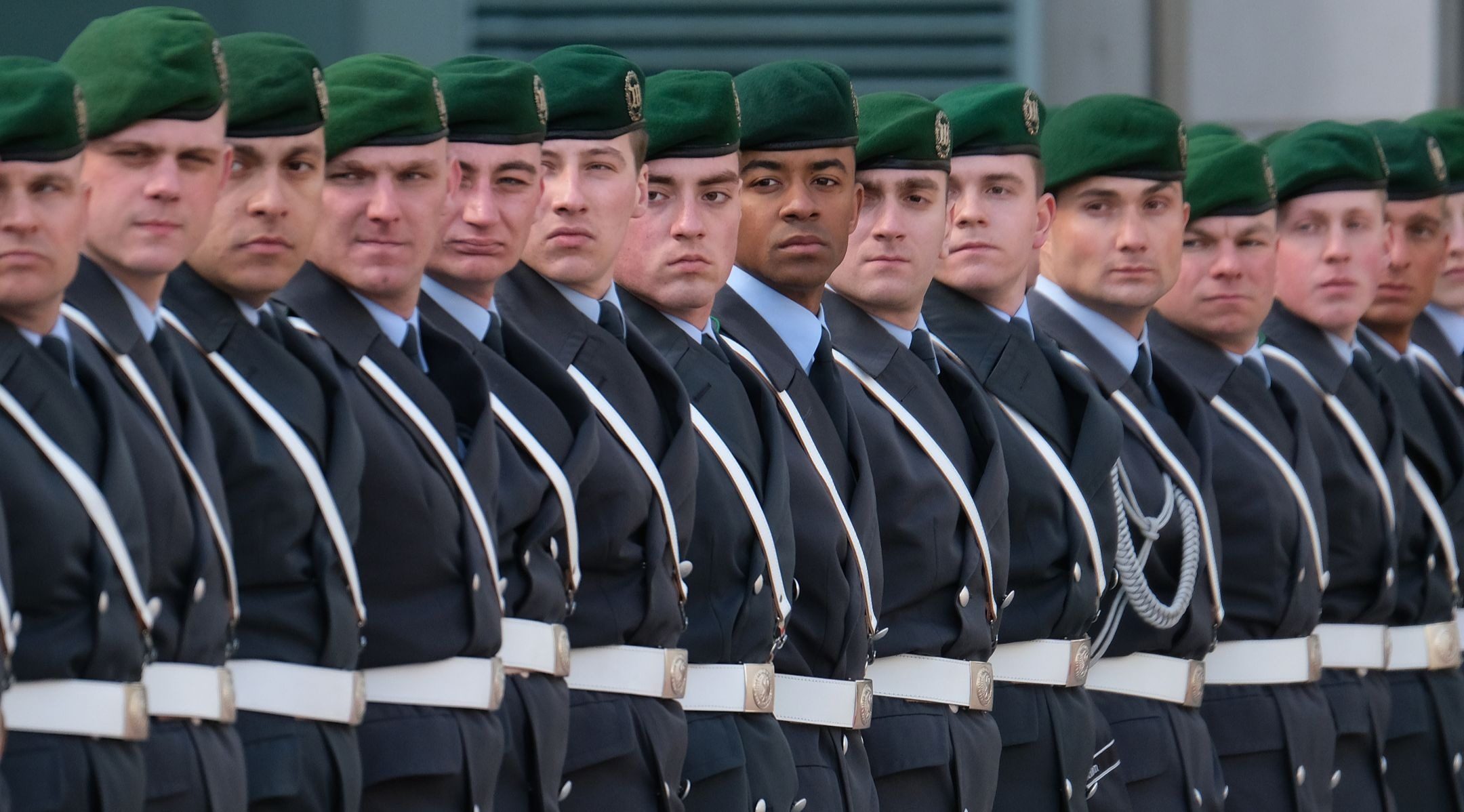 Bundeswehr GettyImages-1135516470 resize Soldiers of the Bundeswehr arrive for the state visit of a foreign leader at the Chancellery on March 13, 2019 in Berlin, Germany.Defense Minister Dr. Ursula von der Leyen announced that Jewish chaplains will serve the German military for the first time in a century. (Sean Gallup/Getty Images)
Advertisement

BERLIN (JTA) — For the first time in a century, Germany’s military will have rabbis as chaplains.

Defense Minister Ursula von der Leyen announced this week that her ministry will appoint Jewish chaplains to the Bundeswehr based on recommendations from the Central Council of Jews in Germany, the umbrella organization that represents the approximately 100,000 members of Jewish communities nationwide.

In addition, a treaty on the military chaplaincy will be negotiated between the Federal Republic of Germany and the Central Council of Jews, as it was for Protestants and Catholics decades ago.

Von der Leyen and Council President Josef Schuster are among those who will address a high-ranking conference that begins Wednesday on both the history of Jewish chaplains in the German military and the expectations of such a chaplain today.

According to the Central Council, the future German military rabbi or rabbis will work both in a pastoral capacity, and in instructing soldiers of all religious backgrounds, “enriching their ethical education … with a Jewish contribution.”

Schuster called the decision “a sign of the growing relationship of trust between the Jewish community and the Bundeswehr as part of our democratic society. ”

German soldiers are not required to identify their religion; the Defense Ministry estimates that about half have done so. According to the ministry, there are approximately 300 Jewish enlistees in addition to about 3,000 Muslims, 41,000 Catholics and 53,000 Protestants. Christian military chaplains were introduced to the Bundeswehr about 60 years ago.

Germany was forced to disband its military following its defeat in World War I.

After World War II, Jewish military chaplains in Allied armies served in Displaced Persons camps and later served their own troops stationed in postwar West Germany. Some opened their military congregations to participation of Jews in Germany, even bringing back Reform Judaism — a movement with roots in Germany. After the unification of East and West Germany in 1990, many Allied troops left the country, and with them the Jewish chaplains.

Now it will be the Bundeswehr itself that will introduce Jewish chaplains. And as part of NATO operations and peacekeeping missions, the military may call on the rabbis to travel to areas where German soldiers are stationed. According to news reports, the rabbinical candidates will have to undergo security clearance. No appointment date for the rabbinical chaplain has been given.

In her statement, von der Leyen said she was both “grateful and humbled to know that Jewish women and men serve in our
Bundeswehr,” adding that every soldier, including Jews and Muslims, has the right to “undisturbed religious practice and pastoral care.”

There reportedly also will soon be imams appointed as military chaplains, although there will be no treaty with the Federal Republic of Germany, since instead of having a single representative body for Muslims in Germany, there are several.